This combo photo shows from left Zhejiang Guangsha Lions' Hu Jinqiu, Jilin Northeast Tigers' Jiang Yuxing, Jiangxi Dragons' Wu Guanxi and Sichuan Blue Whales' Yuan Tangwen. The four players have all impressed during the CBA's behind-closed doors restart this month. The youngsters are enjoying more time on court because some foreign players have been unable to return to China due to coronavirus-related travel restrictions. (PHOTOS / XINHUA)

With most foreign players stuck overseas due to the COVID-19 crisis, China's domestic hoopsters have stolen the show at the CBA's restart.

Unable to recall their import players due to travel restrictions amid the pandemic, half of the league's 20 clubs have opted to play with all-Chinese rosters into the second week of the resumption, providing local talent more time on court and, crucially, allowing them to handle the ball more during clutch periods in games.

The CBA on Monday announced its most-improved roster for Week One of the restart, with all positions occupied by Chinese players, whose statistics speak for themselves

The league on Monday announced its most-improved roster for Week One of the restart, with all positions occupied by Chinese players, whose statistics speak for themselves.

Previously unknown even to most diehard fans, young Zhejiang Golden Bulls guard Lu Wenbo has returned a different player since the June 20 resumption, averaging 12.3 points in 32.5 minutes per game to help his team snatch three wins out of four contests last week.

To put that into perspective, Lu played only 97 seconds per game, scoring less than one point, over the previous 30 rounds before the league suspension, during which the American backcourt combo of Marcus Denmon and Sylven Landesberg dominated the play for the Golden Bulls.

Joining Lu on the most-improved lineup is Sichuan Blue Whales' rookie guard Yuan Tangwen, who has announced himself as an elite playmaker by contributing 11.8 assists and 2.5 steals on average over four games last week.

His 16 assists against the Tianjin Pioneers on June 22 tied Xinjiang Flying Tigers guard Zeng Lingxu's record of the most assists for a single game by an active player in the league.

Sichuan head coach Zhou Jinli is in no doubt that the absence of foreign veterans at his disposal has hugely benefited Yuan's development this month.

"He's grown a lot over the past few games, way more than probably what he's learned in the entire season before the hiatus," Zhou said after Yuan dished out 14 assists to help the Blue Whales beat the Shandong Heroes 79-68 on Saturday.

"By dictating the play and making decisions under pressure in critical moments, I think he's had a great sense of how to run a CBA team well offensively as opposed to playing the college game."

As the third overall pick in the 2019 CBA Draft, Yuan, an alumnus of Xiamen University, is changing the perception that the CBA league is too competitive for graduates of the collegiate system (CUBA).

"I think I've shown what I am good at and that I am capable of doing it well in this league. I will just keep learning and improving," said the 20-year-old Jiangsu native.

It's not just unheralded youngsters, though, that have seen their games evolve since the resumption.

Returning without any imports, the fourth-ranked Zhejiang Lions have proved that they remain a force to be reckoned with after winning four out of five games by Monday to be the league's best-performing all-Chinese team so far. 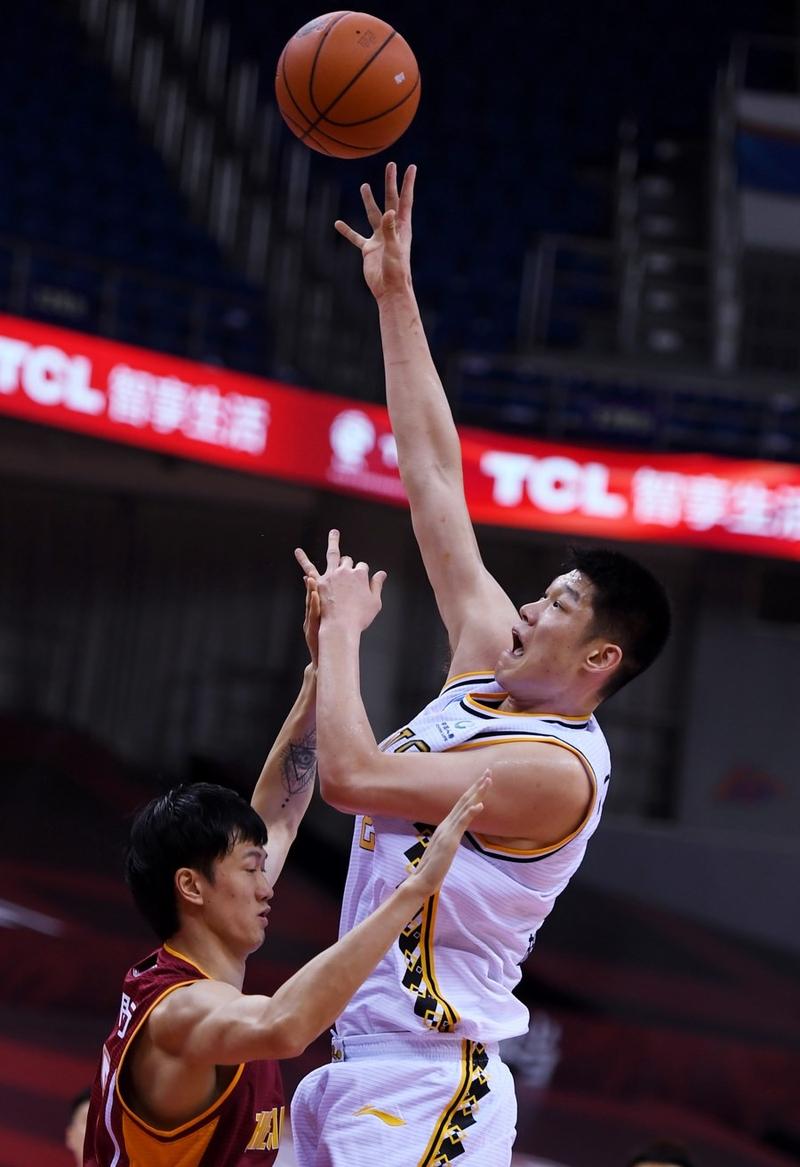 Bolstered by a strong homegrown trio of forward Hu Jinqiu, playmaker Sun Minghui and sharp shooter Zhao Yanhao, the Lions last week pulled off convincing wins against the Nanjing Monkey Kings and three-time league champion the Beijing Ducks－both of whom were facilitated by two foreigners.

On Tuesday, Hu was named the CBA's latest Player of the Month. In rounds 24 to 30, played in January, and the five rounds since the CBA's resumption, Hu has averaged 22.8 points, 12.8 rebounds and 1.5 blocks, powering the Lions to nine victories from 12 games during that period.

Those stats are further vindication for the CBA's plans to limit the use of foreigners in the league.

Starting from next season, CBA teams will be only be permitted two foreigners to play four quarters between them in each game, down from six this season before the league suspension.

The limit is designed to allow local players, especially ball handlers on the back court, more quality minutes and greater responsibility at critical moments to toughen them up for international duty.

The new regulations were prompted by the Chinese national team's disappointing 24th-place finish at the home FIBA World Cup last year－its worst ever result at the tournament－when players' lack of exposure to clutch play in big games was exposed.

Citing talent development as a key task for the domestic league, CBA chairman Yao Ming has vowed to restore public confidence in the national program, beginning with putting homegrown youngsters through sterner tests for their club teams.

"We believe the absence of foreign players, even though it might take some luster off the competition, will benefit the development of our own players," CBA league chief executive Wang Dawei said before the restart.