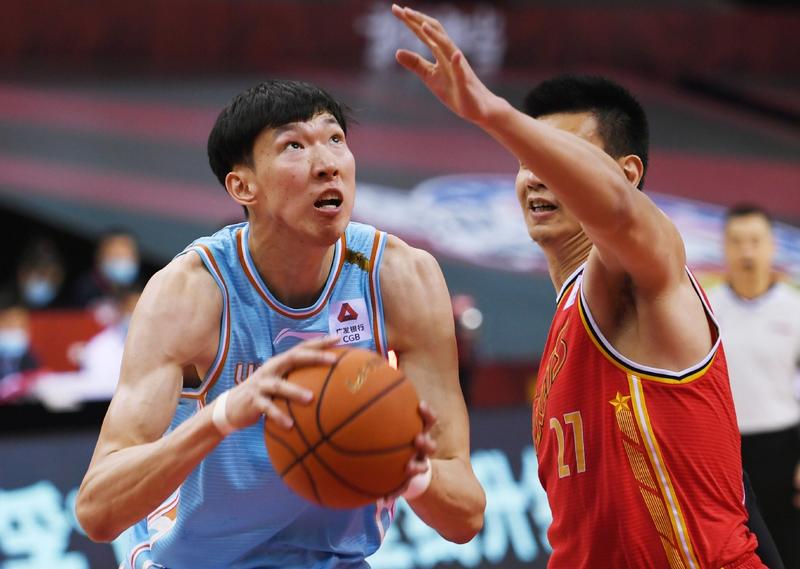 QINGDAO - Hu Jinqiu scored a career-high 38 points as the Zhejiang Lions rallied from a double-digit deficit in the last quarter to beat the Shanghai Sharks 95-90, while Ren Junwei had a heroic performance in the Shanxi Loongs' 106-102 comeback victory over Jiangsu Dragons in the just-resumed Chinese Basketball Association (CBA) league on Monday.

Antonio Blakeney put a game-high 35 points on the board. Wu Guanxi added 28 points and 13 boards, but the duo failed to help Jiangsu claw back

Despite resting star player Yi Jianlian, reigning champions Guangdong Southeast Tigers were a level above Shenzhen Aviators in a 139-104 thrashing.

Hu shot 14 of 19 from the field along with 11 rebounds, leading Zhejiang's four other starters in double-digit points.

Shanghai didn't fully recover from their loss a day ago, trailing 26-19 as the first quarter expired. However, with Li Gen stirring in the paint and Luo Hanchen firing from downtown, Shanghai gradually regained the lead before establishing a 51-43 halftime advantage.

The Zhejiang players continued their icy shooting percentage in the third quarter, but got back into rhythm in the last period, with their full-court press forcing Shanghai into several turnovers.

Hu's three-point play tied the game at 75-75 with less than six minutes on the clock. The Zhejiang forward grabbed the spotlight in crunch time as he drew a foul after knotting two points in the dying minutes and extended his team's advantage to 90-83 by converting the ensuing free throw.

After Ju Mingxin's three-pointer with less than 20 seconds left cut the deficit to four points, Shanghai players failed to mount another comeback as they missed two consecutive shots from downtown.

Without overseas players, Shanxi are well aware of domestic players' role in their contention for a playoffs spot. They witnessed the arrival of Ren's glittering display by finishing with 33 points.

He made a driving layup in Shanxi's 14-4 start, but Jiangsu didn't wilt and fought back in the second quarter, with Antonio Blakeney chipping in 11 points as Jiangsu took a 54-46 lead, before Blakeney sparked a 10-2 run for Jiangsu, who led nine points through the third quarter.

But their advantage melted away with Shanxi turning up the defense in the fourth period. Ren scored five straight points with 1:54 remaining before Tian Guisen connected from deep to put Shanxi 104-102 ahead. Ren converted a pair of free throws to seal Shanxi's win.

Blakeney put a game-high 35 points on the board. Wu Guanxi added 28 points and 13 boards, but the duo failed to help Jiangsu claw back.

Eight Guangdong players scored in double figures, led by Sonny Weems' 28. He powered Guangdong to 75-52 before the interval. The defending champions embarked on an 11-0 run when the game resumed, and pushed the lead to over 30 points to kill any suspense.

Joseph Young's game-high 31 points were not enough as the Nanjing Monkey Kings lost to the Qingdao Eagles 103-95. Qingdao's Zhang Chengyu and Zhao Tailong combined for 45 points.