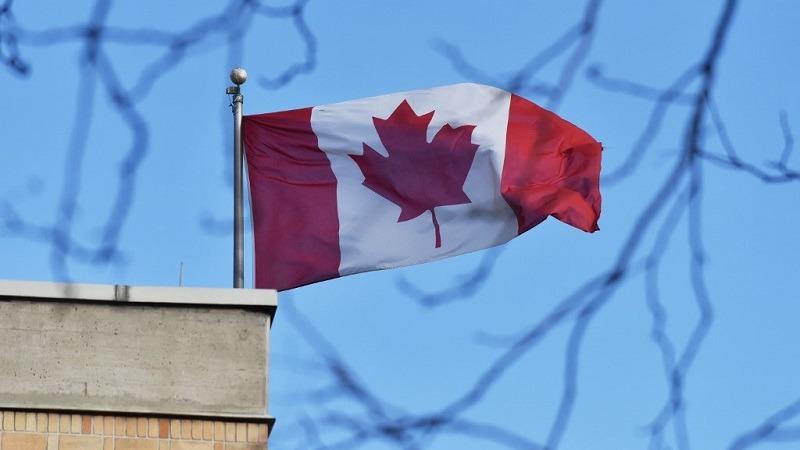 The Canadian flag flies above the Canadian embassy in Beijing on Jan 15, 2019. (GREG BAKER / AFP)

Canadian experts say that rather than play a blame game with Beijing on issues such as the proposed security legislation for the Hong Kong Special Administrative Region and China's handling of the coronavirus outbreak, Canada should base its policy on its own national interests.

Jiang Wenran, a professor at the School of Public Policy and Global Affairs, University of British Columbia, said that instead of "smearing" China publicly, Canada needs to play a more constructive role.

Jiang spoke at a May 24 panel discussion, "The Future of Canada-China Relations", hosted by the Institute for Peace& Diplomacy.

"Canada is a major important middle power between China and the United States," he said. "We don't have to follow the (US President Donald) Trump administration's positions by treating China as an enemy. The trends to be hostile, to disengage and to decouple would not serve Canada's interests."

Canada is a major important middle power between China and the United States. We don't have to follow the (US President Donald) Trump administration's positions by treating China as an enemy. The trends to be hostile, to disengage and to decouple would not serve Canada's interests

He said it's been nearly two years since the US launched a full-scale trade war against China, and it has not brought, and will not bring, Beijing to its knees.

With all the "fury and hype" by the US, there is "very little" leverage the US has over Hong Kong or on coronavirus-related matters.

There have been calls from former ministers in Canada to impose sanctions on China after accusing it of "suppressing key information" related to COVID-19 in the early days of the outbreak.

An article published in The Hill Times said Canada must remain "pragmatic" with China, pointing out that Canada's long-term interests are guaranteed when its foreign policy is centered on "multilateralism" from a realist perspective, as it is a "vital force" to protect and promote its "soft power" on the international stage.

"Hence, unilateral approaches ... are counterproductive, particularly when it comes to dealing with a major global power like China," the article said.

Wendy Dobson, a professor emerita at Rotman and former Canadian associate deputy minister of finance, warned that Canada is now confronted with even greater challenges in developing a "coherent policy" on China, and there is a lot to learn about the rising world power to better understand China's history and institutions.

In her new book titled Living with China: A Middle Power Finds Its Way, Dobson argues that Canadians have been pulled into the "orbit" of the China-US feud by the US' request of Canada to extradite Huawei Chief Financial Officer Meng Wanzhou, which has highlighted Canada's "lack of a China strategy".

She said Canadian policymakers should engage with "multilateral partners" willing to push back against "inappropriate political influence" while pursuing the relationship based on "mutual respect, accommodation and genuine discussion of differences in values and institutions".

Sarah Kutulakos, executive director of the Canada China Business Council, said: "There are a lot of ways that we can participate. For example, the clear tech in reducing impact on the environment is an area where Canada and China can definitely agree. In fact, Canada needs to figure out where they're in alignment with China, and we do have business sectors where that makes sense."

READ MORE: Abuse of their extradition treaty by US & Canada is deplorable

Walid Hejazi, an associate professor at the University of Toronto, also said that Canada should prioritize multilateralism rather than be single minded.

"China is really transforming itself. China's growth over the last 50 years was one model of development, providing the world with lowcost goods," Hejazi said. "In the next 10 to 20 years, China must transform into an innovation-based economy, and there's a lot of potential there for Canadian companies.

"It's absolutely necessary for the government to formulate a well-articulated and well defined Canada strategy as it relates to China," he said.