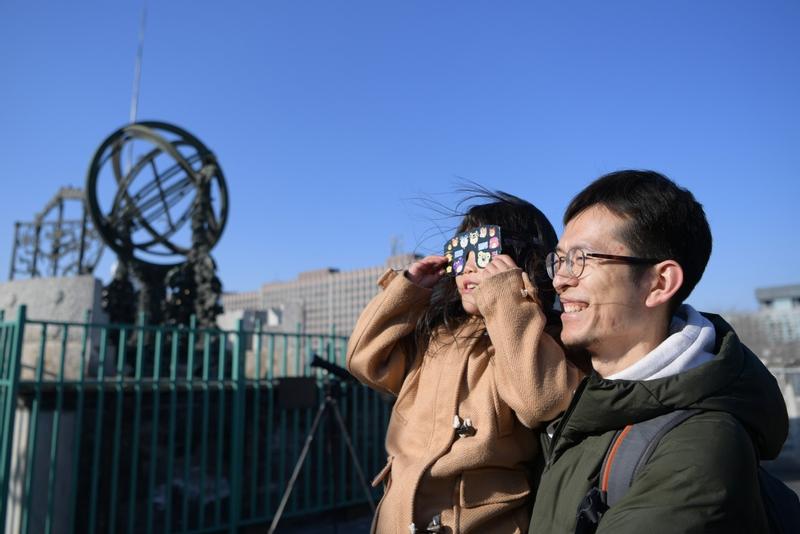 A father and his daughter watch the partial solar eclipse at the Beijing Ancient Observatory in Beijing under the blue sky on Dec 26, 2019. (PHOTO / CHINA DAILY)

With continuous improvement in the country's air quality, environmental authorities have received fewer complaints about air pollution, according to the Ministry of Ecology and Environment.

Environmental authorities across the country received more than 531,000 complaints last year, down 25.2 percent year-on-year, a media release from the ministry said on Wednesday.

Major platforms for environmental complaints, such as hotlines, WeChat and other online channels, all experienced declines of over 20 percent.

Hotlines remain the most popular platform, though that saw the largest decline of 26 percent. Last year, almost 51 percent of complaints were made by phone

Hotlines remain the most popular platform, though that saw the largest decline of 26 percent. Last year, almost 51 percent of complaints were made by phone.

Air pollution keeps topping people's major environmental concerns, though it has been on a downward trend in the past three years.

In 2019, just over half the complaints were about air, down from about 54.1 percent the year before.

"Air pollution is the first type of pollution for which the central authorities launched a special national campaign. With stricter control measures, improvement has been even quicker," said Ma Jun, director of the Institute of Public and Environmental Affairs, a Beijing-based nonprofit environmental research organization.

He said collecting complaints via new media platforms has greatly enhanced the efficiency in addressing concerns.

According to the National Bureau of Statistics, the ratio of days with fairly good air quality in prefecture-level cities across the country increased by almost three percentage points year-on-year to 82 percent last year.

The bureau said cities that have yet to see their PM2.5 particulate matter levels reach the national standard of 35 micrograms per cubic meter still saw the average density of the pollutant decrease by 2.4 percent in 2019.

Ma said the decline in air-related complaints also occurred because many companies have been interacting with the public in a more proactive manner and could solve some of their problems before complaints are made.

"Previously, only individuals and NGOs used our 'Blue Map' service. They complained after they got pollution information via the platform. Now, many companies also use the app. Once they are notified of problems by the app, some of them can give explanations and rectify their problems in a timely manner," he said.

Blue Map, an app launched by Ma's institute, enables the public to check up on air and water quality, local sources of pollution and scrutinize emissions from thousands of companies.

Most of the complaints in 2019 were made from densely populated plain and coastal areas in Central and East China and the Sichuan Basin, which is located in Sichuan province and Chongqing, it said.

The majority of the 20 prefecture-level cities that topped the list for the number of complaints are in these areas, and altogether these cities received 34.3 percent of the total complaints.