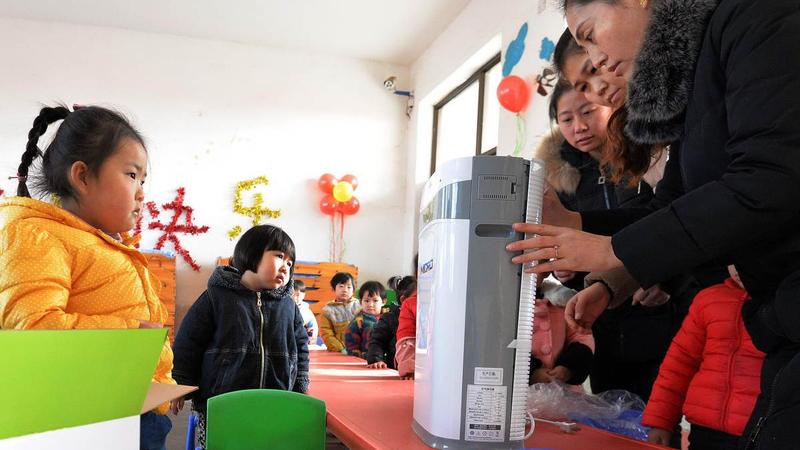 Donors of an air purifier set it up at a kindergarten in Handan, Hebei province. (HAO QUNYING / FOR CHINA DAILY)

Public places, especially elementary and secondary schools, are encouraged to install air purifiers to reduce harm from air pollution, according to a guideline released by the National Health Commission.

"Office buildings and gyms are also advised to have air purification systems or air purifiers to reduce PM2.5 concentrations," according to the guideline released by the commission last week.

In densely-populated places, central ventilation systems are recommended to prevent the concentration of carbon dioxide, the guideline said.

Further, in places that already have air conditioners it is better to install equipment that can filter out tiny, fine particles with a diameter of 2.5 micrometers or less, according to the guideline.

Smoking should be prohibited in all public places, it also emphasized.

"Exposure to fine particles can cause short-term health effects such as eye, nose, throat and lung irritation, as well as coughing, sneezing, runny nose and shortness of breath," the guideline said.

"It can also affect lung function and worsen medical conditions such as asthma and heart disease. Long-term exposure to PM2.5 will also increase respiratory and cardiovascular problems, as well as hospital admissions," it said.

Moreover, the guideline explained that smog will reduce ultraviolet radiation, which may result in depression, an increase of bacteria and rickets－a skeletal disorder that leads to soft and weak bones in children.

As air pollution hits many Chinese cities, education departments in some areas have taken action to promote air purifiers at schools in recent years.

In 2017, education authorities in Zhengzhou, capital of Henan province, announced that air purifiers would be installed in all its schools and kindergartens.

That same year, the Beijing Municipal Education Commission announced that city finances will be used to pay for the purchase and installation of air purifiers in local elementary and middle schools.

Wei Yun, mother of a 4-year-old boy in Beijing, said an air purification system had been installed in her son's kindergarten before he entered his class in September last year.

But in other kindergartens, such as the one her friend's child is in now, she said air purifiers were not installed until the parents raised funds to buy one last year.

Outdoor air quality has improved across China in recent years due to pollution control efforts. Last year, the average concentration of PM2.5 in 338 major cities in China was 39 mcg per cubic meter, a decrease of 9.3 percent year-on-year, according to the Ministry of Ecology and Environment.

"The fine particulate is even more harmful to the elderly, children and pregnant people," said Tao Shu, environmental professor at Peking University. "We should pay more attention to indoor air pollution as surveys show that most people spend more than 22 hours a day indoors."

With the ongoing emission reduction efforts, it is estimated that at least 95 percent of cities in China can achieve the target of reducing PM2.5 concentration to 35 mcg per cubic meter by 2035, according to Tao.