Li Mingyang (first from left) and his team of DDH studio take a field trip before designing the book, Visualizing the Great Wall. (PHOTO PROVIDED TO CHINA DAILY)

The Great Wall is a symbol of China, an icon known throughout the world, but few people know how long it is. The answer is 21,196.18 kilometers. Or to put it into context, if it was placed on the Arctic it would stretch up to and beyond the Antarctic.

However, it turns out that it is actually even longer than previously believed, as new sections are being discovered.

Shan Jixiang, former director of the Palace Museum, also known as the Forbidden City, researched the Great Wall when he was head of the National Cultural Heritage Administration in 2011.

We wanted to lead the readers ... as if they are playing a game about how to build the Great Wall — you have to select a location and find the materials to build it

Song Zhuangzhuang, co-founder of DDH studio, which wrote and designed the book

Unlike the Palace Museum, the Great Wall is located outside of any city or center of population.

"So, to tell the stories of the Great Wall has become an important way to 'make the Great Wall active' and bridge the gap between it and the public," Shan says.

In April, the China Book Review announced the top books about China of 2019 and an illustrated handbook, Visualizing the Great Wall, was one of the winners.

Shan considers Visualizing the Great Wall as a micro encyclopedia of the iconic monument with graphics and texts.

"The book includes detailed information about the Great Wall covering many aspects, including history, culture, economy, military, protection and travel," he says. 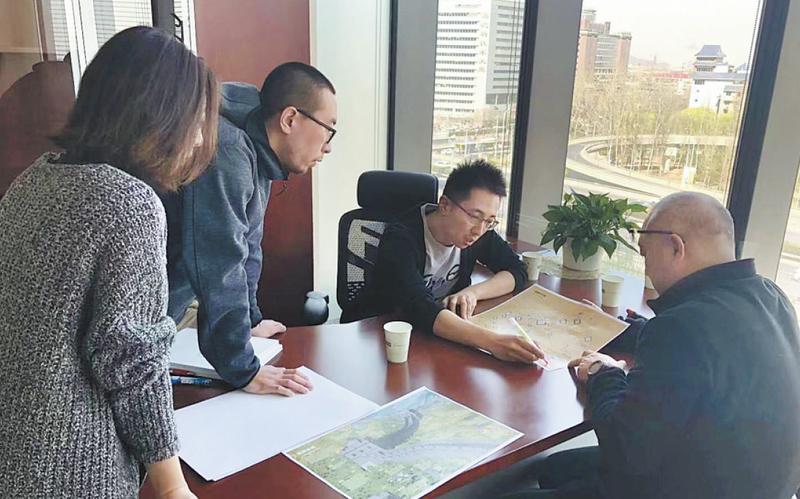 Another team leader, Song Zhuangzhuang (second from right), discusses a design with his colleagues. (PHOTO PROVIDED TO CHINA DAILY)

Ma Huateng, CEO of Tencent, believes the Great Wall is much more than just a wall purely for military defense.

"The Great Wall is an important connection of geography, history and culture," Ma writes in the foreword of the book.

Who built the Great Wall? What materials were used? How was the location for the Great Wall selected?… All these questions, and more, are answered in the book with the help of vivid graphics.

The book is written and designed by DDH studio, which was set up by Song Zhuangzhuang and Li Mingyang, two alumni from the School of Architecture at Tsinghua University, in 2017.

The studio focuses on urban study, design and science education, and has previously created illustrated books about Beijing and the railway line between Beijing and Lhasa in the Tibet autonomous region.

Song, 31, together with Li, 30, led a team of 14 designers to produce Visualizing the Great Wall in 2018. Unlike previous illustrated work about Beijing, where the duo grew up and are familiar with, they had to learn about all the sections of the extensive Great Wall from scratch.

"There are more than 4,000 essays and many books and materials about the Great Wall. The huge amount of fragmented information was our biggest challenge when designing the book," Song says. 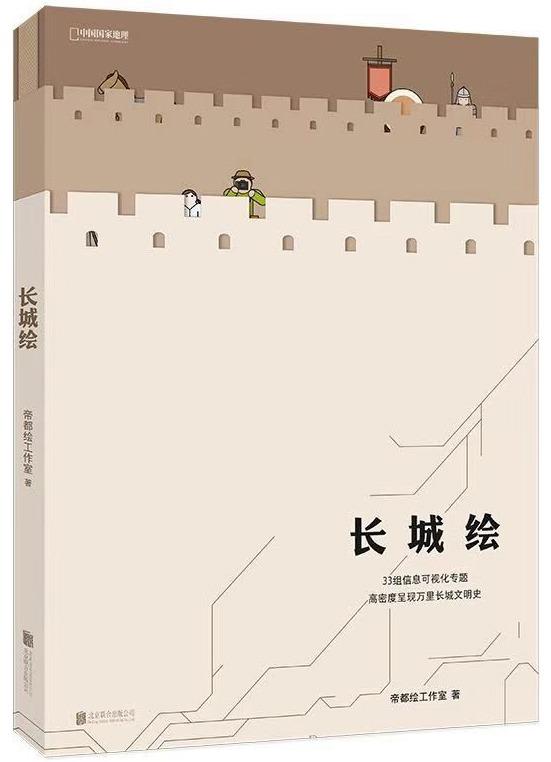 The cover of the book, Visualizing the Great Wall, the first illustrated book of its kind on the topic. (PHOTO PROVIDED TO CHINA DAILY)

According to Song, the team discussed dozens of topics pertaining to the Great Wall and decided to use each double-page spread to present one topic with graphics, which was their first challenge.

Song was in charge of designing the chapter about "walls" and tried to find a good way to attract readers.

"We wanted to lead the readers through this chapter as if they are playing a game about how to build the Great Wall－you have to select a location and find the materials to build it," he says.

The next challenge was to design a page that could portray humans and their emotions in different ways through visually-pleasing graphics. For example, there is one topic about generals who had guarded the Great Wall－after several rounds of brainstorming, the designers finally came up with a long-table scene that puts all the generals together, but making different gestures to show their characteristics.

Song's team also chose to tackle issues that have not been thoroughly studied, such as making a page about all the products branded as Changcheng (the Great Wall), and another page delving into the question of whether the Great Wall plays a critical role in wildlife migration. 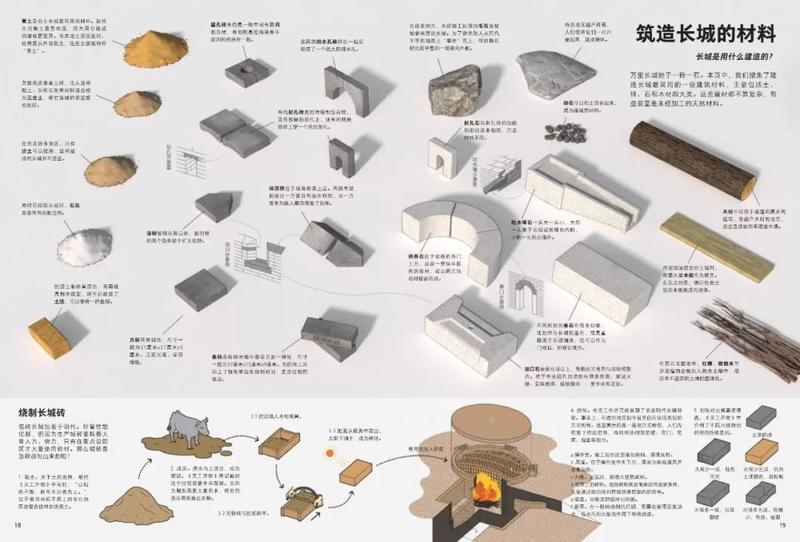 The book only contains 20,000 Chinese characters, as there is much more information hidden in the graphics.

A 1.5-meter-long map of the Great Wall built during the Ming Dynasty (1368-1644), drawn by Li and his colleagues, is another highlight of the book.

"There was no whole map of the Great Wall that was built in the Ming Dynasty before, so we thought it was worth making that effort," says Li.

"We had to go through all possible materials to find the exact location of each part of the Great Wall and mark it on the map.

"It was like a jigsaw puzzle, because each source or book may only have one or two clues to the location and we needed to find the other ones to solve the puzzle."

Three experts on the Great Wall were invited to review all the content of the book. "And as a participant of the meetings, I also learned new information about the Great Wall," Li says. 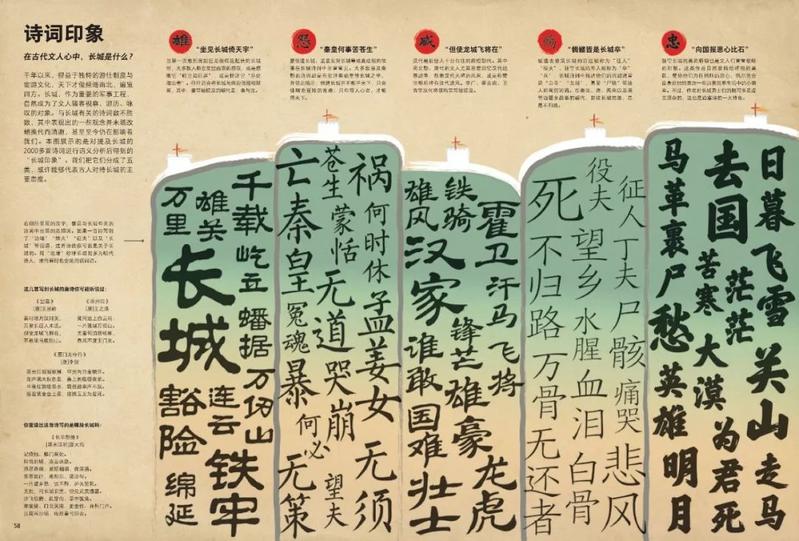 Classic poems about the monument. (PHOTO PROVIDED TO CHINA DAILY)

In September 2016, the China Foundation for Cultural Heritage Conservation launched a project focusing on protecting the Great Wall, which prompted a collaboration with Tencent Foundation to launch a special public fund for the cause.

In August 2018, Ma Yao, project manager of the protection of the Great Wall at Tencent Foundation, invited the DDH studio to write and design the book.

"The reason we wanted to make this book is that we realized there has been no illustrated book about the Great Wall in China like this one. The existing ones are either for children or are just photo albums," Ma explains.

Ma had been focusing on work related to the Great Wall two years before the foundation was launched.

In 2014, Ma was responsible for mapping the "street view" of the Great Wall on Tencent maps. He led two photographers on field surveys and mapping excursions.

"I've visited many sections of the Great Wall around China. Some were located in such inhospitable places that our team could only map six to seven kilometers each day," Ma says, adding that Tencent Foundation has donated 10 million yuan (US$1.4 million) for repairs to the Jiankou section of the Great Wall in Beijing.

"The traditional Chinese and English language versions of the book are under preparation for release this year," Ma says. 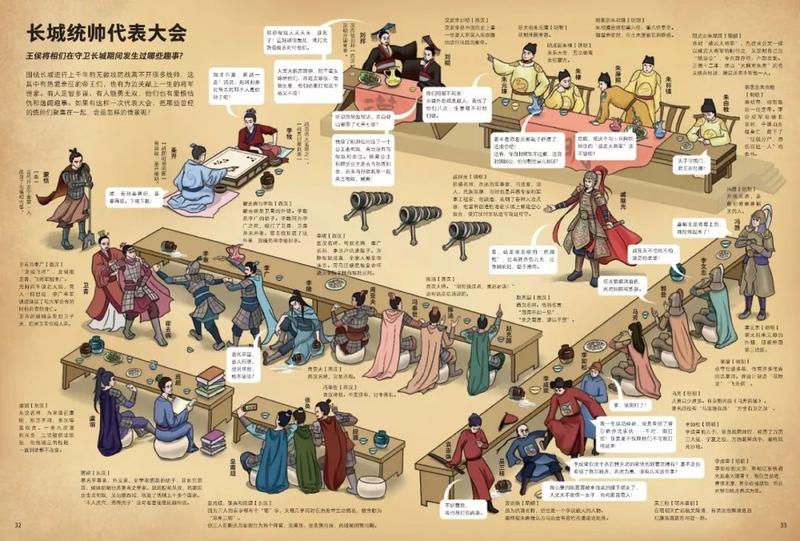 Generals who had guarded the Great Walls. (PHOTO PROVIDED TO CHINA DAILY)

He says the book is also for public information and that all of the copyright royalties will go to the China Foundation for Cultural Heritage Conservation.

Hou Ke, deputy director of the special public fund for the protection of the Great Wall under the China Foundation for Cultural Heritage Conservation, says among all the sections of the Great Wall, only a small portion have been developed into scenic areas, and there is a need for people to know more about the Great Wall than just as a tour site.

"We hope the book can help readers understand more about the Great Wall and raise awareness to protect it."