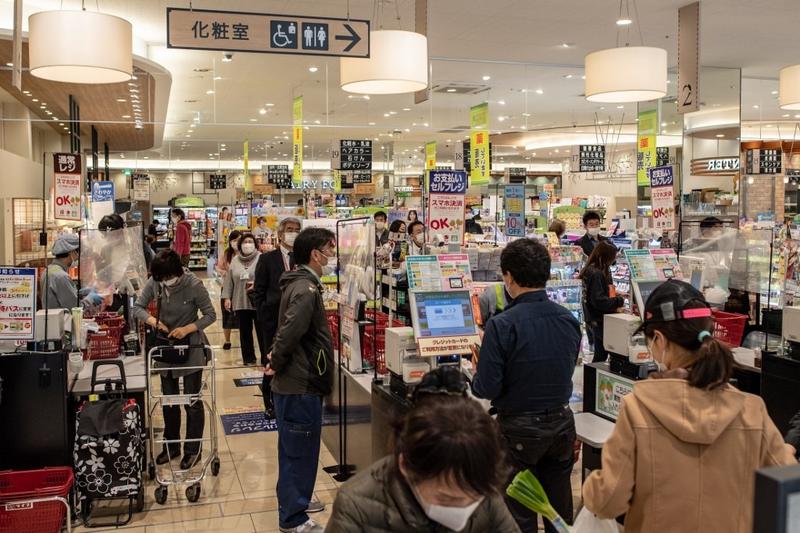 Customers wearing face masks queue at the cashier in a supermarket in Tokyo on April 23, 2020. Japan is under a month-long state of emergency to curb the spread of the COVID-19 coronavirus, initially covering seven regions but now in place nationwide. (PHILIP FONG / AFP)

TOKYO — Japan’s core consumer inflation eased in March for the second straight month, underscoring fears that slumping oil costs and soft consumption because of the coronavirus pandemic might push the country back into deflation.

The data released on Friday comes just ahead of the Bank of Japan’s (BOJ) policy meeting on Monday, at which sources have told Reuters the bank will sharply cut its growth forecasts and take further steps to ease funding strains on firms hit by the fallout from the outbreak.

The crisis has further dented an economy already on the cusp of recession by keeping citizens home and forcing shops to shut down, distracting the BOJ from its efforts to achieve its elusive 2 percent inflation target.

The core consumer price index, which includes oil products but excludes volatile fresh food prices, grew 0.4 percent in the year to March, government data showed, matching the median market forecast. It was slower than a 0.6 percent increase in February.

“The data suggests that underlying inflation has been weakened by declining energy costs, and the trend will accelerate given falling oil prices,” said Masaki Kuwahara, senior economist at Nomura Securities.

“The BOJ will be forced to cut its economic and price projections ... and judge the momentum towards achieving its price goal has been undermined,” he said, adding that any steps the central bank takes next week will centre on strengthening quantitative easing and corporate financing support.

Japan suffered nearly two decades of deflation - or sustained periods of price declines - until 2013, when the economy emerged from the doldrums thanks in part to Prime Minister Shinzo Abe’s “Abenomics” stimulus policies.

Abe has touted an end to deflation as one of the key successes of Abenomics, which included bold monetary easing undertaken by his hand-picked BOJ Governor Haruhiko Kuroda.

However, the coronavirus pandemic has taken a heavy toll on the world’s third-largest economy, with service-sector sentiment slumping to historical lows and exports plunging on weak global demand.

The government last week expanded a state of emergency and beefed up a stimulus package as the number of COVID-19 infections and deaths rose. Japan had recorded 12,023 cases and 299 deaths as of Thursday, according to public broadcaster NHK.

Prices of face masks and some food items, such as beer and ice cream, rose in March as households stocked up their pantries, the data showed.

However, the gains were more than offset by plunging fuel costs. Gasoline prices rose just 0.4 percent in March after a 4.8 percent gain in February, as slumping global demand from the pandemic hit crude oil costs.

The pandemic also hurt hotel room charges as well as prices of premium Wagyu beef and cut flowers, as travel bans and event cancellations hit demand for these items, the data showed.

Many analysts expect consumer price growth to flatten and turn negative in coming months as gasoline and utility costs fall, pushing inflation further away from the BOJ’s target.

“The impact of fuel costs comes with a lag, so there’s no doubt consumer prices will start to fall in coming months,” said Hiroshi Miyazaki, senior economist at Mitsubishi UFJ Morgan Stanley Securities. “The trend is for consumer prices to stay negative.”