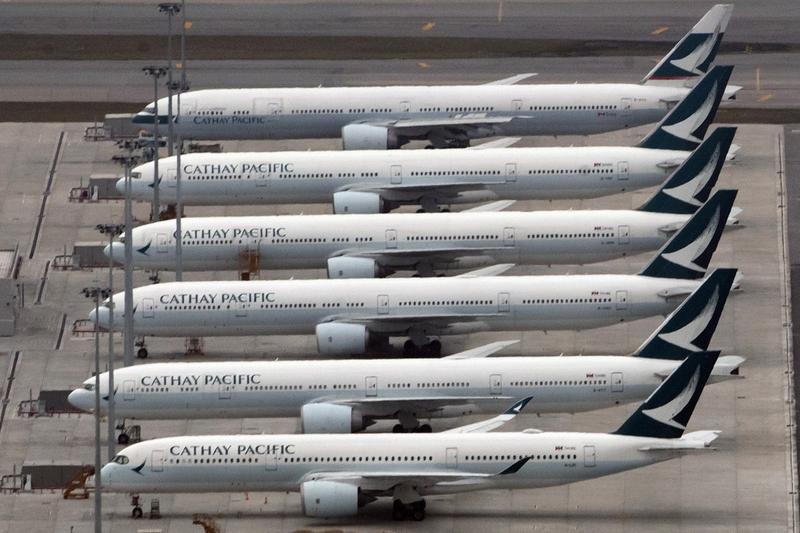 In this March 6, 2020, file photo, Cathay Pacific aircrafts line up on the tarmac at the Hong Kong International Airport. The global airline's flying schedules have declined since the outbreak of new coronavirus COVID-19. (KIN CHEUNG / AP)

As the coronavirus pandemic sweeps the world, closing borders and travel, many airlines will be bankrupt by the end of May. That is the stark warning from the Centre for Aviation (CAPA), a leading global aviation and travel intelligence organization based in Sydney.

Due to the collapse in demand for air travel, Asia-Pacific airlines are drastically cutting back their scheduled flights and grounding part of their fleets

“Due to the collapse in demand for air travel, Asia-Pacific airlines are drastically cutting back their scheduled flights and grounding part of their fleets,” Biswas told China Daily.

“Large-scale temporary layoffs of staff in the global and Asia-Pacific airline industry will be inevitable in coming weeks.”

CAPA analysts, in a commentary, said that unless there is some sort of coordinated government and industry action, the global aviation sector faces “catastrophe”.

“As the impact of the coronavirus and multiple government travel reactions sweep through our world, many airlines have probably already been driven into technical bankruptcy or are at least substantially in breach of debt covenants,” they said.

“Cash reserves are running down quickly as fleets are grounded, and what flights there are operate much less than half full. Forward bookings are far outweighed by cancellations, and each time there is a new government recommendation it is to discourage flying. Demand is drying up in ways that are completely unprecedented. Normality is not yet on the horizon.”

But not everyone is so pessimistic. Geoffrey Thomas, head of the global Airline Ratings agency, acknowledges the sector is in serious trouble, but he expects it will “bounce back”. “It always does,” he told China Daily.

“Sure, what we are seeing now is unprecedented, but we will see a bounce back. We did after 9/11 and the Asian financial crisis and will bounce back after this.”

Thomas said talk of many airlines going bust is “not the sort of thing we need right now”.

“Many of the world’s major carriers such as Etihad, Qatar Airways, Air New Zealand, Singapore Airlines and Emirates are government-owned anyway and I doubt their governments will let them go under. They will feel the pain, as will the Chinese airlines which are also state-owned.”

Already half a dozen European airlines have ceased operations, while many carriers around the world have severely cut back on services and are asking staff to take leave.

Each nation is adopting the solution that appears best suited to it, right or wrong, without consideration of its neighbors or trading partners

On March 17, Australia’s national carrier Qantas and its subsidiary JetStar announced they will cut their international operations by 90 percent and domestic services by 60 percent.

On March 18, Virgin Australia cancelled all its international flights.

Singapore Airlines has frozen some hiring, while its executives will take a 10 to 15 percent pay cut.

CAPA said national self-interest over cooperation is the evolving threat for aviation – an industry crucial to global communications and trade.

“Each nation is adopting the solution that appears best suited to it, right or wrong, without consideration of its neighbors or trading partners,” it said.

Independent aviation analyst Brendan Sobie said he expected some consolidation will take place within the industry.

“Meaningful consolidation excludes the potential exit of a few small private-owned airlines that were already weak competitors. Ironically, we may be more likely to see more consolidation in Europe, although there already has been significant consolidation there and arguably it is Asia that needs it more, given the overcapacity, intense competition and pressure on profitability prior to the onset of this crisis,” Sobie said.

Ian Douglas, honorary senior lecturer with the School of Aviation at the University of New South Wales in Sydney, said the lockdown of large populations around the world is new territory.

“The initial ‘damage’ to airlines will be to those closest to the center of the problem – the (Chinese) mainland carriers, and the collateral damage to Cathay Pacific,” Douglas said.

“The large mainland carriers have State ownership and support – and some of that flows over into the ownership of Cathay Pacific. But I don’t see any failures.”

Douglas said some Southeast Asian carriers, however, may not be so lucky.

On March 16, Malaysia Airlines said travel bans and plummeting demand around the world have put the loss-making national carrier at risk of bankruptcy. Thai Airways, which has seen three years of successive losses, is in a similar position, as is Philippine Airlines.

CAPA said that as the coronavirus crisis deepens around the world, the response by governments to the crisis within the airline sector has been “tepid” and nationally based.

“It will consist mostly of bailing out selected national airlines. If that is the default position, emerging from the crisis will be like entering a brutal battlefield, littered with casualties.”

IHS Markit’s Biswas said the financial impact on Asia-Pacific airlines will be severe for at least the first half of 2020. He said the longer this pandemic lasts, the more severe the global consolidation and restructuring of the airline industry will be.

CAPA, however, described “the post-coronavirus world” as “a unique time for a new aviation beginning”.