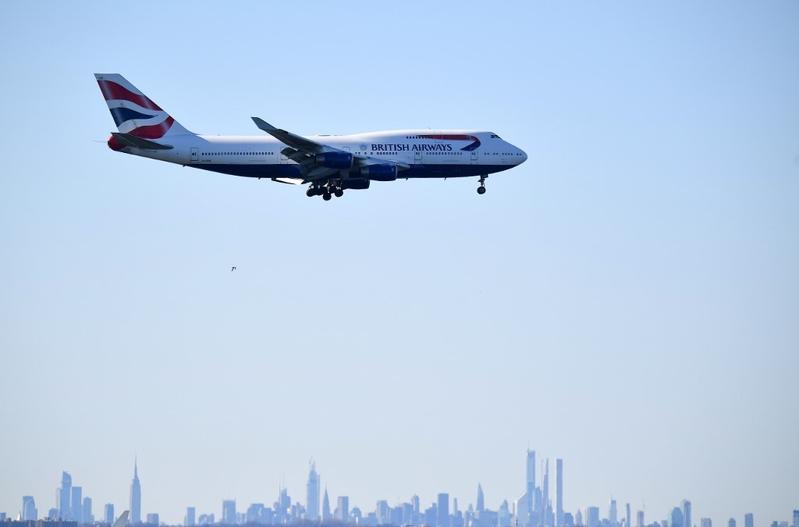 A British Airways plane, coming from London Heathrow, is seen above the skyline of Manhattan before it lands at JFK airport on March 15, 2020 in New York City. (JOHANNES EISELE / AFP)

SYDNEY/CHICAGO - Airlines around the world said they would make more drastic cuts to their flying schedules, shed jobs and seek government aid after countries further tightened border restrictions because of the fast spreading coronavirus.

CAPA Centre for Aviation, an airline analysis and consulting firm, said most airlines globally will be bankrupt by the end of May without coordinated govt and industry action to avoid such a catastrophe

The owner of British Airways said on Monday that it would cut flying capacity by at least three quarters in April and May, and that its outgoing boss, Willie Walsh, would defer his retirement as the carrier tries to survive the fallout of the virus.

United Airlines Holdings Inc, one of the three largest US airlines, booked US$1.5 billion less revenue in March than during the same time last year and warned employees that planes could be flying nearly empty into the summer, even after severe flight cuts.

United said it would cut corporate officers’ salaries by 50 percent and reduce flight capacity by about 50 percent in April and May, with deep capacity cuts also expected into the summer travel period.

“This crisis is moving really quickly,” United Chief Executive Oscar Munoz and President Scott Kirby said in a memo to employees on Sunday.

Things worsened over the weekend as Spain declared a state of emergency, the Trump administration added Britain and Ireland to its list of countries facing travel curbs, and Australia and New Zealand said all travelers would have to self-isolate for 14 days.

“We call on Congress and the White House to take all measures available to protect the health and payroll of American workers,” said Sara Nelson, president of the Association of Flight Attendants-CWA, which represents 50,000 US flight attendants at 20 airlines, including United.

CAPA Centre for Aviation, an airline analysis and consulting firm, said most airlines globally will be bankrupt by the end of May without coordinated government and industry action to avoid such a catastrophe.

“Demand is drying up in ways that are completely unprecedented,” CAPA said in a report. “Normality is not yet on the horizon.”

UK airlines called on the British government to help ensure their survival, while Germany’s Tui AG and Scandinavian carrier SAS said they would suspend the vast majority of operations due to the COVID-19 outbreak and apply for government support.

Finnair on Monday issued its second profit warning in three weeks, saying it would report a substantial comparable operating loss for 2020 as it was cutting around 90 percent of its normal capacity from the beginning of April. The Finnish airline also dropped its dividend.

EasyJet, Europe’s fourth-biggest airline, said it could ground the majority of its fleet, while Icelandair Group hf said it was cutting capacity and working with labor unions to reduce its salary cost “significantly”.

Air New Zealand Ltd said job losses would be necessary as it cut long-haul capacity by 85 percent over the coming months.

“We are now accepting that for the coming months at least Air New Zealand will be a smaller airline requiring fewer resources, including people,” Air New Zealand Chief Executive Greg Foran said in a statement.

The airline has halted trading in its shares until Wednesday.

Qantas Airways Ltd said it would be making fresh cuts to its flying schedule beyond the 25 percent reduction in international capacity announced last week due to the new travel restrictions.

UBS analysts said the latest travel restrictions would have a significant effect on Qantas’ international traffic, which historically accounted for around 45 percent of revenue and 25 percent of earnings before interest and tax.

“A downside scenario where international traffic is down 50 percent for a whole year and domestic down 30 percent could result in cash burn of up to A$200 million (US$123.60 million) per month after incorporating changes to the business,” UBS said of Qantas.

Smaller rival Virgin Australia Holdings Ltd, which has a weaker balance sheet but a heavier domestic focus, said it was assessing its response to the new travel restrictions.

S&P Global Ratings downgraded its credit rating on Virgin to B- and placed it on creditwatch negative due to rapidly deteriorating industry conditions spreading from the international market to the domestic market.

“Rating stability will increasingly rely on the company continuing to adjust its cost base to offset potential further material revenue erosion and limit cash outflows if the reduction in demand continues beyond the next few months,” S&P said.