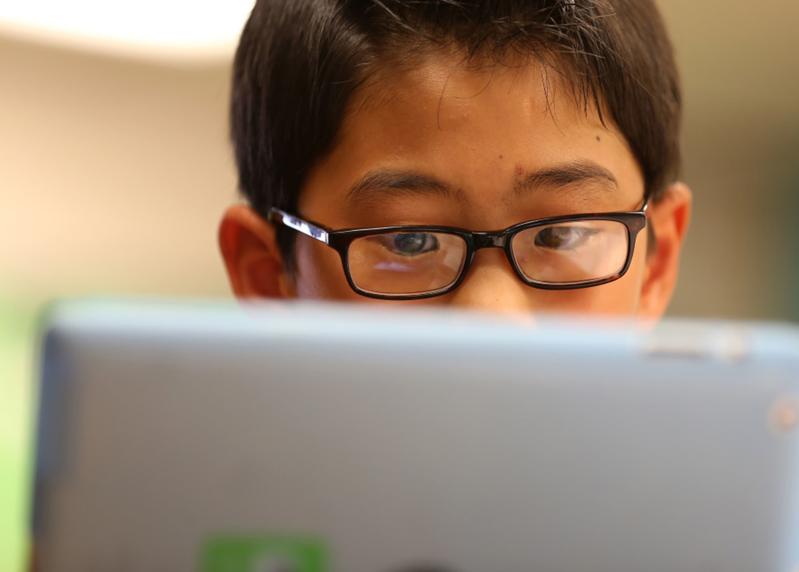 Second graders work on Apple iPads as part of their classroom work at Park Lane Elementary school, part of the the Canyons School District, in Sandy, Utah, May 20, 2013. (GEORGE FREY / BLOOMBERG)

“‘Mom, I don’t know how to log on to the computer;’ ‘Mom, help me print out my paper.’ Imagine hearing ‘Mom!’ every minute. I’m just up to my neck,” said Yang, who works for a Chinese bank in risk control.

They say their kids aren’t getting the education they’ve paid for, sparking a debate over who should bear the financial brunt of this unprecedented disruption

For Yang and thousands of other parents in Hong Kong, the past few months have been nothing but frustration. The city’s school-aged children are expected to miss about 13 weeks of classes due to government-mandated shutdowns, first because of anti-government protests, now for the coronavirus outbreak. On top of that are the fees; tuition in one of the world’s most expensive cities can cost upwards of US$20,000 a year.

“My eldest was just screaming at home,” said insurance rep Jade Yang, no relation to Jackie, when she heard Tuesday that Hong Kong had extended the school closings until at least April 20. “A few more weeks of this and she’s going to go crazy.”

Parents of students at prestigious international schools, many of whom make up the upper echelons of finance, law and global business, are particularly irate. On top of tuition, they pay fees for lunch, the bus, and other activities. They say their kids aren’t getting the education they’ve paid for, sparking a debate over who should bear the financial brunt of this unprecedented disruption.

“It’s like we can’t get a break,” said Jackie Yang. “I’m practically homeschooling my kids. All the parents are angry and feel quite helpless.”

Some parents have asked the schools for their money back, if not the tuition, then at least the ancillary fees that can add up to thousands. Jackie Yang has joined a dozen parents petitioning for refunds on services their children no longer receive, such as food and transportation. They want schools to cut short Easter Holiday and the summer break to make up for lost time.

A thread about refunds on a Facebook page run by consultancy Top Schools attracted hundreds of comments, said Ruth Benny, who runs the company that advises parents. Bus fees alone can cost HK$4,000 (US$513) a month or more, she added. The latest extension will only add to the frustration.

Some parents have asked the schools for their money back, if not the tuition, then at least the ancillary fees that can add up to thousands.

“This will push many people over the edge” to seek overseas schools, Benny said.

So far, the parents’ requests have gone largely unmet. Schools say they still need to pay teachers, and contracts with third-party vendors -- school bus providers, for example -- are negotiated months in advance.

Some international schools have tried to mitigate the damage by offering real-time online classes that try to simulate a normal school day, complete with breaks, sports and music sessions. Others provide pre-recorded instructional videos and work for students. Ironically, parents who’ve spent years trying to minimize their children’s screen time are suddenly finding them sitting in front of computers for seven or eight hours a day.

But younger students in particular need help navigating the online systems. Yang’s daughter, a first-grader at an American school, needs help to access the internet, complete her lessons, and print out documents.

“Most parents are not genuinely asking for a refund on the fees,” said Benny, a mother of two teenagers who recently enrolled one of them at a school in the UK. “The divisive element here is whether or not they are satisfied with the online learning that’s been provided.”

It’s all far from ideal, though refunds aren’t warranted, said Anne Murphy, a consultant at ITS Educational Services Ltd., which works with international schools. The government provided some relief last week by increasing its annual subsidy for education by 40% to HK$3,500 a year.

“If the government closes schools until April or May,” Murphy said, “I feel there will be a huge exodus of families.”

While students won’t go back to class until after Easter -- the previous target date was March 16 -- the education bureau has allowed schools to host small groups for test-prep sessions. The Chinese International School, among others, plans to allow Year 13 students to come back on a reduced timetable starting March 2 to help them prepare for International Baccalaureate exams.

A growing number of parents are asking the Hong Kong education bureau to approve make-up courses during the summer or to provide some compensation. The education department didn’t respond to emailed queries about these issues.

“This remote learning scheme is causing a lot of meaningless inconvenience to parents, teachers and children, just so the education bureau or the government can avoid making an immediate, responsible decision for the pupils and citizens,” said Betty Lai, who opted to send her two kids to the UK to study because of the closures.

At local schools – which are either free or charge significantly less than international schools -- it’s a mixed bag. Some are offering online lessons, though many just provide e-mailed work sheets. Microsoft Corp. is working with the government to enable 800,000 students from 1,000 primary and secondary schools to use its software. Still, the common feedback – from public and private schools alike -- is that it’s no substitute for in-person teaching.

Jade Yang said her eldest daughter is studying for an International Baccalaureate exam in May, an important part of her US university application.

“Not being able to attend school is a pretty big deal,” Yang said. “My daughter needs to discuss a lot of her essays with the teachers, and not being able to meet in person has caused a significant delay.”

More than the unrest caused by the protests or the economic fears triggered by US-China trade tensions, the school interruptions have prompted expatriates to consider their options. Some are looking to Singapore, where schools remain open even though the city-state has more virus cases than Hong Kong.

“The one thing that people cannot get around is school,” Robert Chipman, chief executive officer of the global relocation firm Asian Tigers Group, said in a Bloomberg TV interview. “That’s where you hear people discuss with real, real concern -- they don’t like the idea of their kids not being in school.