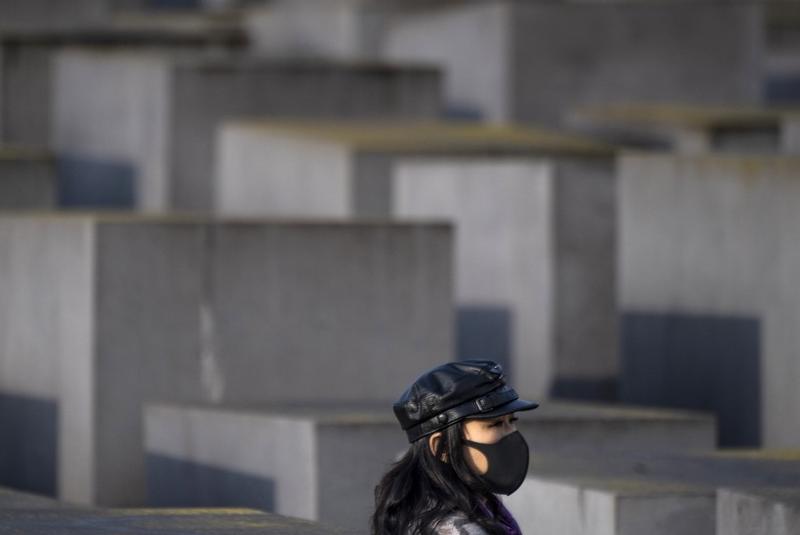 A tourist wearing a surgical mask walks through the Holocaust memorial in Berlin on Jan 27, 2020. (JOHN MACDOUGALL / AFP)

Germany has declared its first confirmed case of the novel coronavirus after a 33-year-old man contracted it from a colleague visiting his workplace from Shanghai, in one of the first few cases of person-to-person transmission outside China.

The case raises concerns about the spread of the flu-like virus that broke out in the central Chinese city of Wuhan at the end of last year and has killed 106 people.

It spreads in droplets from coughs and sneezes and has an incubation period of 1-14 days.

German car parts supplier Webasto said an employee at its headquarters in Stockdorf, Bavaria, had become infected following the visit of an employee from China

The German state of Bavaria's health ministry said late on Monday that a man in the town of Starnberg, 30 kilometres southwest of Munich, was suffering from the virus and was in "good condition" while isolated under medical observation.

German car parts supplier Webasto on Tuesday said an employee at its headquarters in Stockdorf, Bavaria, had become infected following the visit of an employee from China.

A day earlier it said an employee from Shanghai tested positive for the virus upon returning to China.

Confirmation of any sustained human-to-human spread of the virus outside of China, as well as any documented deaths, would bolster the case for reconvening the World Health Organization's Emergency Committee to consider again whether to declare a public health emergency of international concern.

Outside of China there have now been 45 confirmed cases in 13 countries, with no deaths so far, the WHO's spokesman Christian Lindmeier told a briefing in Geneva on Tuesday.

Andreas Zapf, president of Bavaria's office for health and food safety, said on Tuesday the person infected was 33 years old and had come into contact with a Chinese lady on Jan 21.

Zapf said the Chinese woman was from Shanghai but her parents, who are from the Wuhan region, had visited her a few days earlier.

He added that she had arrived in Germany on Jan 19, appearing not to have any symptoms, but began to feel ill on her flight home on Jan 23. She sought medical treatment after landing and tested positive for coronavirus.

When that information was relayed back to the German company, a male employee said he felt like he had flu over the weekend and was on Monday advised to get medical treatment.

The head doctor at the clinic where the man is being treated said at a news conference the patient was awake and responsive and he did not think the man's life was at risk.

Bavaria's health ministry said people who had been in contact with the man had been informed of possible symptoms, hygiene measures and transmission channels.