By Wang Xiaodong, Xin Wen in Beijing and Zhou Lihua in Wuhan 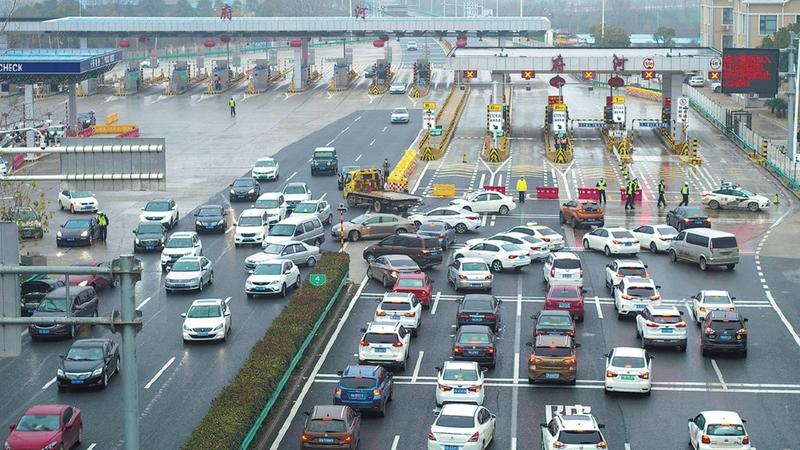 Fuhe Toll Station on the Daihuang Expressway in northern Wuhan, Hubei province, is closed, as the city has been put into lockdown because of the ongoing pneumonia outbreak. (YUAN ZHENG / FOR CHINA DAILY)

Central China's most populous city has been sealed, with some exceptions, in an emergency move to control a new virus that has caused 17 deaths amid increasing worries of a wider outbreak.

The government of Wuhan announced on Thursday morning that as of 10 am it was indefinitely suspending the city's public transport system, including buses, subway and ferry, and that air and rail passengers would not be allowed to disembark in the city.

Authorities advised city residents, which number more than 11 million, not to leave the city unless necessary.

On Thursday, hundreds of flights to and from Wuhan, Hubei province, were canceled, and some highway exits in the city were also closed.

Several other cities in Hubei province, including Huanggang, Ezhou and Chibi, also took similar measures on Thursday to isolate themselves to prevent spread of the disease.

Also on Thursday, the Ministry of Transport suspended all long-distance bus and ferry travel to Wuhan, a major port on the Yangtze River, and banned commercial cars, trucks and ships from leaving the city with passengers.

The Hubei provincial government urged on Thursday that people suspected of infection be treated in single hospital rooms and only be put in hospital rooms with others when their infection was confirmed.

A temporary, 25,000-square-meter hospital is being built in the city's Caidian district, according to local media reports.

On Wednesday, the Wuhan city government released a notice requiring residents to wear face masks in public places, as required by China's laws on infectious disease control and prevention and emergency response.

The city has appealed to the central government for 40 million face masks and 5 million protective gowns to meet its demand.

All 17 deaths, as of late Wednesday night, on the Chinese mainland from the new coronavirus, 2019-ncov, were in Hubei province, the National Health Commission said on Thursday. Wuhan is the provincial capital.

The number of confirmed cases on the mainland rose to 571, affecting 25 provinces, autonomous regions and municipalities. Ninety-five of these patients were in critical condition. As of late Wednesday night, 393 suspected cases were also reported, the commission said.

Outside the mainland, Hong Kong, Macao and Taiwan each had one confirmed case.

On Wednesday night, the World Health Organization said it needed more evidence to decide whether the novel coronavirus is a "public health emergency of international concern" following a WHO emergency committee discussion. The committee agreed to reconvene Thursday.

"The decision about whether or not to declare a public health emergency of international concern is one I take extremely seriously, and one I am only prepared to make with appropriate consideration of all the evidence," WHO Director-General Tedros Adhanom Ghebreyesus said in a statement.

"Our team in China is working with local experts and officials to investigate the outbreak," he said.

On Thursday, the WHO praised the measures Wuhan adopted to control the outbreak, saying it showed commitment to reducing risks.

"What they are doing is a very, very strong measure and with full commitment. So based on the situation, they are taking the action they deem is appropriate, is very important," Tedros said.

"We stressed to them that by having a strong action not only will they control the outbreak in their country, but they will also minimize the chances of this outbreak spreading internationally. So they recognize that."

The outbreak was first reported last month in a seafood market in Wuhan, where wild animals were also sold. The number of confirmed cases has been rising rapidly over the past few days. Although most are in Hubei province, an increasing number of areas in China have reported cases.

Experts said the large increase in reported cases is related to improvements in techniques of testing for the virus, which results in higher diagnostic efficiency. Study of the existing cases has revealed an increasing number who had not visited the market, considered as the source of the outbreak, and people who had not traveled to Wuhan becoming infected, the National Health Commission said on Thursday.

It released a medical guide on Thursday to help medical institutions quickly diagnose and treat patients so as to reduce the chances of them spreading the virus to other parts of China or overseas.

Li Bin, vice-minister of the National Heath Commission, said the risks of the virus spreading further are increasing with the ongoing 40-day peak traffic season for the upcoming Spring Festival. Li called for all-out efforts to contain the disease in Wuhan.

Scientists in several universities and institutes in the United States and China, including University of Texas and Fudan University in Shanghai, are working to develop a vaccine for the virus, although time is needed for progress, Xinhua News Agency reported on Thursday.

Although much remains unclear about the virus, including its source, means of transmission and toxicity, initial study shows the elderly may more easily become infected, while minors are less sensitive to it, according to Gao Fu, director of the Chinese Center for Disease Control and Prevention.

Of the 17 people who died after infection, one was 48 years old, one was 53, and all the others were older than 60. Most of them already suffered from other physical conditions, such as hypertension, diabetes and stroke, according to National Health Commission. The commission has said it will manage the disease as a Grade A infectious disease, which mandates the strictest prevention and control measures, such as quarantine of patients and those in close contact with them.

When such a public health emergency is initiated, personnel, goods and materials, transport vehicles, and other necessities, are sent to the site of the outbreak, said Xu Shuqiang, director of the National Health Commission's health emergency response office.