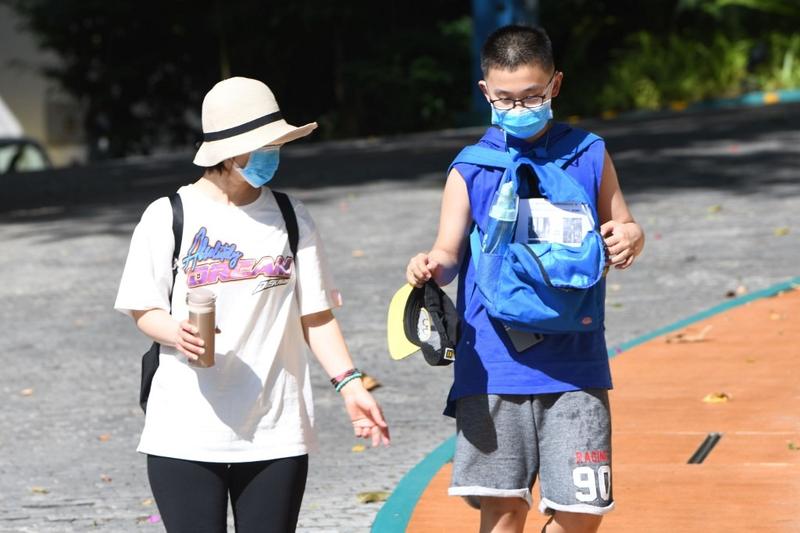 People wearing face masks walk out of Shangri-La's Rasa Sentosa Resort and Spa in Singapore on Jan 24, 2020, where the first patient confirmed with the Wuhan virus in Singapore had stayed before being admitted to hospital. (ROSLAN RAHMAN / AFP)

SINGAPORE - Singapore confirmed two more cases of a new strain of coronavirus, its health ministry said on Friday, a day after identifying its first case of the novel coronavirus infection that was identified in China's Wuhan.

Schools in Singapore asked parents to declare overseas holiday plans as authorities screened travellers at air, land and sea checkpoints on Friday, to combat the spread of a deadly flu virus that has revived memories of the SARS pandemic in 2003.

On Thursday, the Southeast Asian travel hub confirmed its first case of the coronavirus strain, a tourist from the Chinese city of Wuhan at the centre of the outbreak, and said another had tested positive preliminarily.

However, the current outbreak does not appear as deadly as SARS, Prime Minister Lee Hsien Loong said in his annual Lunar New Year message. The pandemic killed 33 people in Singapore, one of the worst-hit countries outside China.

"We are well prepared, because we have been gearing up for such a situation ever since we dealt with SARS," Lee added.

In China, the death toll from the new coronavirus reached 25 on Friday, with more than 800 people infected. Staff at Singapore's National University Hospital were handing out face masks and taking the temperature of arriving visitors, when Reuters visited early on Friday.

Near a sign advising of a three-hour wait, parents in the busy waiting room cradled young children wrapped in blankets. Another Reuters witness on a packed bus saw citizens move away swiftly from a fellow passenger who sneezed loudly.

"Those who remember the SARS period knew how dreadful it was back then, people in the lifts cover their nose and passengers in the train sit away from me," said Facebook user Joyce Koh.

"I was in white uniform (so) they thought I was a nurse, but actually I was a beauty consultant."

This time round, Singapore's first reported sufferer was a 66-year-old staying with his family at the Shangri-La's glitzy Rasa Sentosa Resort & Spa, on a beach strip dotted with tourist attractions.

Hotel staff who had cleaned the room and attended to the guests had been "isolated", Shangri-La official Josef Dolp told broadcaster ChannelNewsAsia.

Chinese nationals were nearly a fifth of all 18.5 million visitors to Singapore in 2018, by far the largest group, the latest official data shows. Schools in Singapore have sent parents e-mails asking where their children will be travelling for holidays over the long Lunar New Year weekend.

"Schools have instituted travel declarations for all students and staff," the education ministry said.