By He Shusi, Chen Zimo and Joy Dong 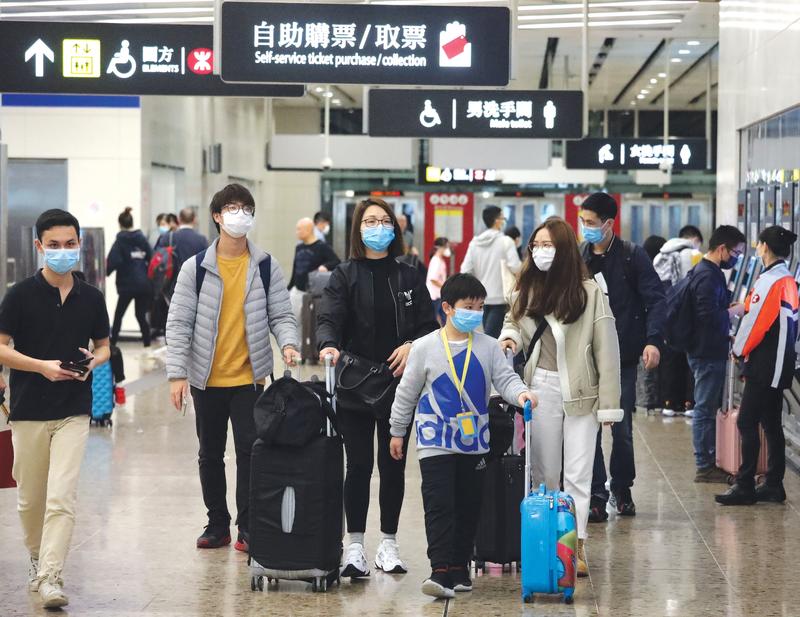 Hong Kong and Macao have announced new measures against a possible outbreak of the new pneumonic disease that originated in Wuhan.

The action comes after the SARs each confirmed their first two cases of infection.

As of 12:01 am on Thursday, 55 patients were quarantined in Hong Kong, with 53 in stable condition and two in critical condition, while 126 patients have been discharged, according to the Hospital Authority

All trains arriving at the high-speed rail terminus will be thoroughly disinfected.

The special administrative region government also is maintaining close contact with mask suppliers to ensure an adequate stockpile, as the supply of masks in the city is nearly exhausted. Batches of masks will be delivered to the city next week, Cheung said.

However, the city has a three-month supply of masks and other protective gear for medical practitioners, Cheung said.

Meanwhile, major Lunar New Year events in the city are being canceled. Those include the four-day carnival in the West Kowloon Cultural District from Saturday through Tuesday, and the Lunar New Year Cup on Sunday.

Hong Kong’s two confirmed cases are both male, aged 39 and 56, who had been to Wuhan within the past week. Both have been quarantined at Princess Margaret Hospital in northwestern Kowloon.

On Thursday morning, rail operator MTR Corp announced the suspension of high-speed rail ticket sales between Hong Kong and Wuhan immediately, without giving a date for service resumption. Scheduled trains will continue operating, while passengers can only disembark at the Wuhan station but cannot board.

Cathay Pacific, Hong Kong’s flagship airline, also announced that it will not fly between Hong Kong and Wuhan from today through to Feb 29.

As of 12:01 am on Thursday, 55 patients were quarantined in Hong Kong, with 53 in stable condition and two in critical condition, while 126 patients have been discharged, according to the Hospital Authority.

Macao is also tightening precautions in its land ports as it also confirmed two infections.

Outgoing and incoming travelers for Macao and bordering Zhuhai, Guangdong province, will be required to have their temperatures taken to avoid further spreading of the coronavirus, Macao Chief Executive Ho Iat-seng said.

As of Thursday afternoon, it also required all travelers entering the city via land ports to make health declarations.

Ho said the government has placed an order for over 20 million masks, and they will be made available through designated pharmacies.

Macao also announced on Thursday it was canceling its New Year fireworks and dragon dances.

Ho said Macao has over 3,000 people from Hubei province — including its capital, Wuhan — living in the SAR, based on the latest visas issued in January. They include students, tourists, employees and their relatives. Ho advised them to cancel trip back to Hubei for New Year for the sake of their health.