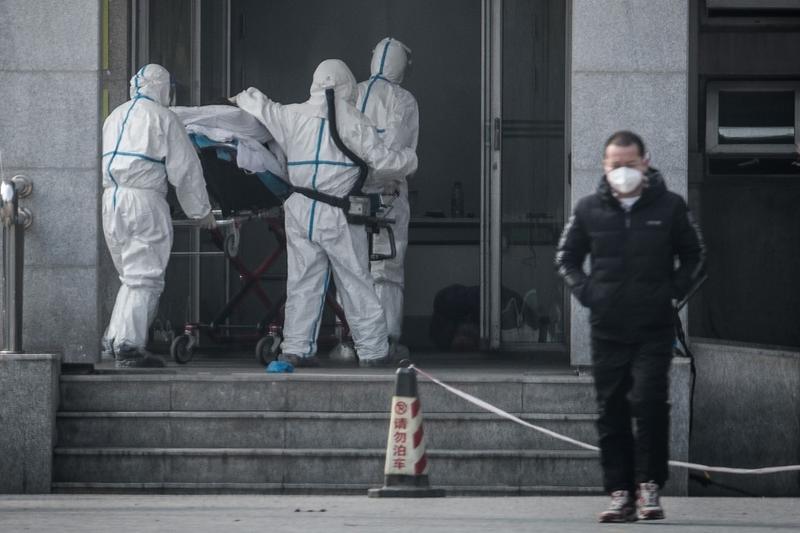 Medical staff members carry a patient into the Jinyintan hospital, where patients infected by a new type of coronavirus are being treated. In Wuhan, China's central Hubei province, on Jan 18, 2020. (PHOTO / AFP)

Among the infected patients, 12 are male and five female, aged between 30 and 79. Three of them were in critical condition.

The patients showed symptoms such as fever or cough before Jan 13, according to the Wuhan Municipal Health Commission. Most of the patients, except for two with severe symptoms, have been transferred to Wuhan Jinyintan Hospital for treatment.

As of Friday, 62 cases were reported in Wuhan. Of the patients, two  died, eight were in critical condition, and 19 have been discharged from hospitals

Four patients were cured and discharged from hospitals on Friday.

Epidemiological investigations into the 17 new cases are under way and authorities are tracing those who came in direct contact with them, the Wuhan Municipal Health Commission said, adding that Wuhan will continue to widen the search area, identify suspected cases and conduct sampling tests.

Epidemiological analysis of previously published cases found that in some cases, patients had no exposure to Wuhan's Huanan Seafood Wholesale Market, which is believed to have a connection with most of the cases of infection. It has been temporarily closed while disinfection is carried out.

As of Friday, a total of 62 cases were reported in Wuhan. Of the patients, two people died, eight were in critical condition, and 19 had been discharged from hospitals.
ALSO READ: Wuhan enhances virus monitoring

A total of 681 among 763 people who came in close contact with the patients had been placed under medical observation and subsequently discharged. None of those people were found to have been infected.

Yanxin, the city's deputy mayor as saying on Sunday. Wuhan officials said since Jan. 14 they are using infrared thermometers at airports, railway stations and other passenger

terminals in the city to strengthen screening.

The new virus belongs to the large family of coronaviruses that includes Severe Acute Respiratory Syndrome (SARS), which

killed nearly 800 people globally during a 2002-2003 outbreak that started in China.

Though experts say the new virus does not appear to be as lethal as SARS, little is known about its origins and it is not

clear whether human-to-human transmission can occur. Thailand has reported two cases of the virus and Japan has reported one.

All of the cases so far have involved people either living in Wuhan or who have travelled to the city.
The Chinese Center for Disease Control and Prevention, a national level body, issued a large infographic on Saturday on social media, urging people not to believe rumours about the virus and stressing it is not SARS.

With inputs from agnecies