Weekend rallies in central Seoul a headache for residents 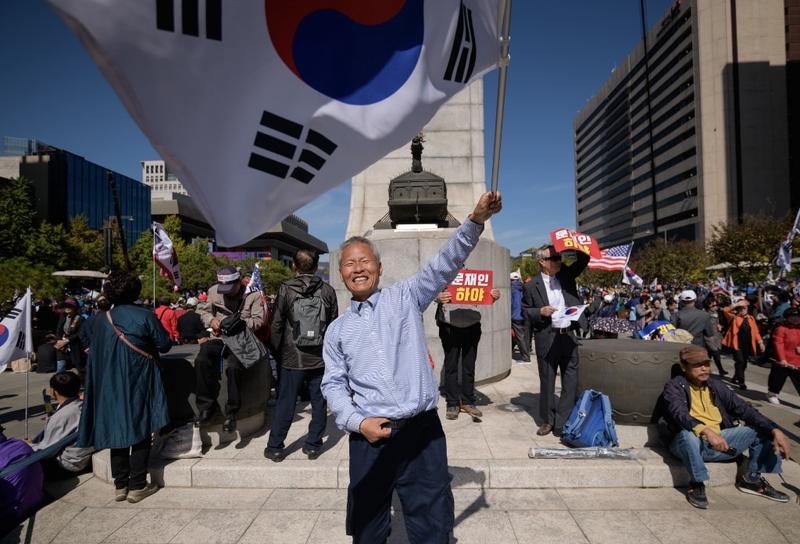 Anti-government activists attend a rally in central Seoul, South Korea, on Oct 9, 2019. The protesters were calling for South Korean President Moon Jae-in to step down following the appointment of Justice Minister Cho Kuk amid a divisive investigation into corruption allegations surrounding his family. (ED JONES / AFP)

SEOUL - Protesters chanting anti-government slogans and marching toward the presidential office with loudspeakers and traffic lanes closed off for them have become a common sight on Saturdays in central Seoul in recent years.

“We came here to have lunch, but we are now moving to somewhere else because it is just too loud,” said Kim Yi-yeon, a 34-year-old office worker, on Saturday at Gwanghwamun Square. “I feel like we had Gwanghwamun stolen every weekend.”

“The right to public assembly should be recognized, but we are just too stressed because we don’t even know until when it will continue. I think there should be some regulations,” she said while walking away from the square with a friend.

The rallies at the heart of Seoul and overnight sit-ins near Cheong Wa Dae, which have lasted for months, have sparked complaints from nearby residents on excessive noise, traffic disturbances, public disorder and violent behavior of some protesters.

The number of rallies held in central Seoul skyrocketed from 68,315 in 2018 to 87,425 in the period of January to November last year

Now, calls are rising for “reasonable regulations” on rallies to seek a balance between upholding the constitutional right to protest and protecting legitimate interests of others and of the community as a whole.

According to a survey conducted by the National Police Agency in August last year with 1,500 adults, nearly 62 percent of respondents called for the tightening of regulations on the noise level in protests.

The number of rallies held in central Seoul skyrocketed from 68,315 in 2018 to 87,425 in the period of January to November last year, posing a dilemma to law enforcement officers over which comes first: the right to protest or the right to peacefully live, rest, move and learn.

Residents say the rallies and overnight sit-ins have reached the point of being excessive and are causing them great distress.

“There are almost no buses running every Saturday because roads are closed off for protesters, not to mention all the shouting, chanting and music blaring from loudspeakers,” said Lee Eun-a, 36-year-old office worker living in a neighborhood close to Cheong Wa Dae.

“The problem is that we will have to suffer from the noise and inconvenience every weekend,” she said. “Before exercising their right to free speech, they should respect others’ rights too.”

An overnight sit-in near Cheong Wa Dae led the families of the students at the Seoul National School for the Blind, located hundreds of meters from the presidential office, to file a petition for the assemblies to be banned.

The visually challenged children’s rights to learn is being violated due to noise from the protest as they learn to maximize their use of the remaining senses such as hearing, smelling and feeling by touching the floor to find their way around through after-class sessions, they argue.

“The students are more sensitive to noise and their mobility is interrupted by the excessive rallies,” said an official from the Korea Blind Family Association. “Since the school was founded in 1913, we never had such problems. I hope they have more consideration for the physically challenged.”

An association of conservative and Protestant groups, the Pan-National Alliance for (President) Moon Jae-in’s Resignation, had held a round-the-clock sit-in for three months, causing noise from loudspeakers even at night.

Police banned their rally, but the Seoul Administrative Court invalidated that action in a ruling last month. The court said that the protest should still be allowed from 9 am to 10 pm.

Protesters stopped the overnight rally following the court’s ruling, but they continue to stage a rally on the street leading to the presidential office between 9 am and 10 pm, setting up a stage and chairs each morning.

“We understand we should not cause inconvenience, but the right to protest must not be violated because of such inconvenience,” said Park Won-kyun, 75, who was attending the anti-government rally in front of Cheong Wa Dae on Saturday.

“It is important to hold this rally in front of the presidential office for the president to hear us,” he said. “We will continue to hold a rally until President Moon steps down.”

Calls for revision to Assembly Act

Currently, anyone who wishes to hold an outdoor rally can do so upon reporting to police at least 48 hours in advance under the Demonstration and Assembly Act. No formal approval is required.

There are some exceptions.

Since the liberal Moon administration took power in 2017, the number of rallies banned by authorities has dropped from 96 in 2016 to 12 in 2018.

The number of rallies is expected to soar leading up to the April 15 general election.

Also, a ban on rallies within 100 meters of the country’s key facilities including the National Assembly was lifted after the Constitutional Court ruled the clause unconstitutional in 2018. With a relevant revision having failed to pass through parliament, rallies can be held within 100 meters of key government facilities without any restrictions.

We don’t have a tradition of holding discussions and consultations to harmonize different rights - such as right to protest, right to learn, right to peacefully live - of different stakeholders so there only had been clashes of the rights.

Lee Hie-houn, a professor in law and police at Sun Moon University, said there should be more specific regulations on the noise level in rallies to minimize harm to residents.

“The right to protest is crucial, but the Constitution also stipulates that such a basic right can be restricted if public good is threatened,” he said.

The protest culture also has to mature as much as civic awareness in the right to protest has grown.

“We don’t have a tradition of holding discussions and consultations to harmonize different rights - such as right to protest, right to learn, right to peacefully live - of different stakeholders so there only had been clashes of the rights,” said Han Sang-hie, a law professor at Konkuk University.

ALSO READ: #MeToo takes off in S. Korea, but justice harder to attain

“Rather than police unilaterally set the rules, rally organizers and residents should come together to agree on regulations and restrictions,” he said.

Police said they are working on a revision to a relevant ordinance to toughen regulations on the level of noise during protests.

“We are still holding internal discussions. The direction would be to set different decibel regulations for different times to enhance protection for residents near protest sites,” an official in charge of policing rallies said on condition of anonymity.

Police are said to be seeking to add the decibel limit for the nighttime - the maximum decibel level of 55 - near residential areas and public facilities and to measure the average intensity of noise more precisely.

“It will not be a regulation unilaterally devised and we are seeking to strike a balance between freedom of speech and residents’ rights to peacefully live.”