S.Korean driver burns himself in protest against carpool service 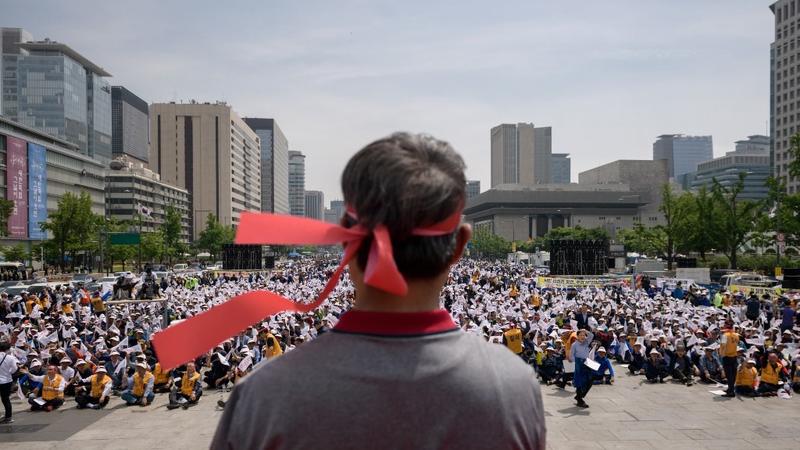 Taxi drivers protest against ride-hailing service 'Tada' saying such services threaten their jobs and livelihoods, in central Seoul on May 15, 2019. (ED JONES / AFP)

SEOUL - A South Korean taxi driver burned himself to death early Wednesday in what was believed to be a protest against the introduction of mobile carpooling services, according to local media reports.

The 76-year-old driver, identified by his surname Ahn, set fire on himself at around 3:19 am local time on the sidewalk near the Seoul Plaza in central Seoul.

He was found by a passer-by and taken to a nearby hospital, but the driver passed away.

Ahn had reportedly participated in the rallies with his colleague drivers against the adoption of ride-sharing services by the taxi-hailing app operators.

Taxi drivers have strongly protested against the shared mobility on worry that the carpooling services can take away most of their customers.

In December last year, a 57-year-old taxi driver burned himself to death near the building of the National Assembly, and a month later, another taxi driver died after setting fire on himself in protest against the carpooling services.

After the second death, the Kakao Mobility halted the test operation of its ride-sharing services in a bid to find an alternative with taxi associations.

In February, another taxi driver set fire on his taxi and drove into the parliamentary building. The 62-year-old man suffered burns, but he survived after treatment.

Thousands of taxi drivers gathered at the Gwanghwamun square in central Seoul Wednesday afternoon to protest against the mobile carpooling services and the mourn for the death of colleague tax drivers.