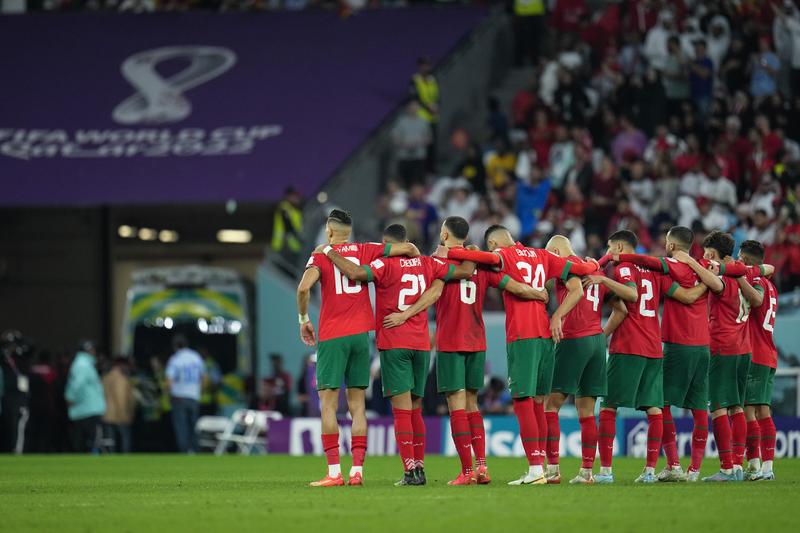 Morocco players gather during a shootout at the World Cup round of 16 soccer match between Morocco and Spain, at the Education City Stadium in Al Rayyan, Qatar, Dec 6, 2022. (JULIO CORTEZ / AP)

DOHA, Qatar - After springing the latest World Cup upset in a tournament which has had its fair share, an increasingly confident Morocco side that masterminded victory over Spain will aim to continue their fairytale run in Saturday's quarterfinal with Portugal.

Thirty six years ago, Morocco made history by becoming the first African country to qualify for the World Cup last 16 at the 1986 tournament in Mexico.

They now have a chance to become Africa's and the Arab world's first semi-finalists in front of a fervid support which has been swollen by backing from much of the rest of the region.

Morocco will no doubt revel in another opportunity to thrive as underdogs, having previously made a mockery of their unfancied status by topping a tough Group F ahead of Croatia, the 2018 finalists, and Belgium, ranked second in the world. 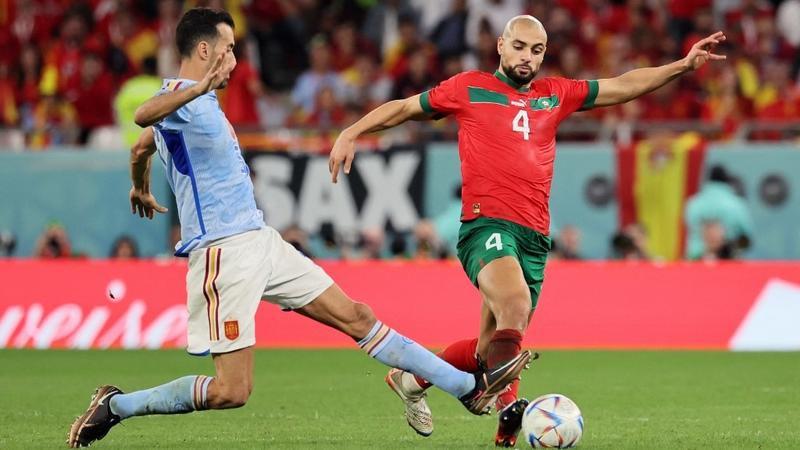 Spain's midfielder #05 Sergio Busquets (left) fights for the ball with Morocco's midfielder #04 Sofyan Amrabat during the Qatar 2022 World Cup round of 16 football match between Morocco and Spain at the Education City Stadium in Al-Rayyan, west of Doha on Dec 6, 2022. (KARIM JAAFAR / AFP)

Their success in Qatar has been built on a foundation of defensive resilience and unpredictability on the counter-attack, and that strategy was executed to perfection against 2010 champions Spain.

Morocco refused to be hypnotized by their opponents' extraordinary 1,019 passes and denied the Spaniards a goal in two hours of energy-sapping action as they secured a 0-0 draw before edging into the last eight on penalties.

By contrast, Saturday's opponents Portugal, starting without Cristiano Ronaldo, turned in a dazzling display of attacking brilliance in their 6-1 hammering of Switzerland after an inconsistent group stage campaign.

Relegating Ronaldo to the bench did not remove the spotlight from him but Portugal showed they could thrive without their talisman, his absence seemingly galvanizing the team as they looked more mobile and fluid without the 37-year-old.

Ronaldo's replacement on the night, 21-year-old Goncalo Ramos, scored the first hat-trick of this year's tournament and looks sure to retain his place to take on a watertight Morocco defense. 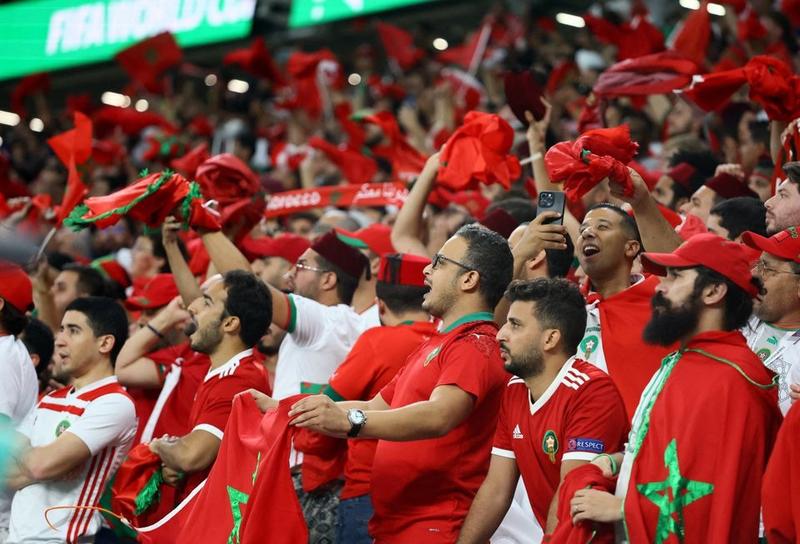 Morocco fans watch from the stands during the World Cup round of 16 match between Morocco and Spain at Education City Stadium, Al Rayyan, Qatar, Dec 6, 2022. (WOLFGANG RATTAY / REUTERS)

"I will use what I believe is the right strategy, as I have done my entire life," Portugal coach Fernando Santos said.

While Santos' bold move turned out to be a masterstroke, Switzerland coach Murat Yakin's switch to a back five for their first knockout game backfired spectacularly. Yakin said it was because they expected Ronaldo to be dropped. 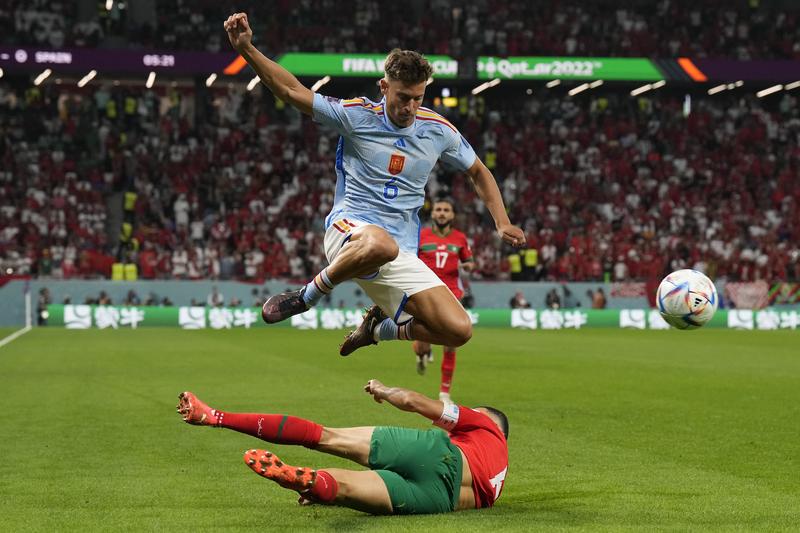 Spain's Marcos Llorente jumps over Morocco's Romain Saiss during the World Cup round of 16 soccer match between Morocco and Spain, at the Education City Stadium in Al Rayyan, Qatar, Dec 6, 2022. (MARTIN MEISSNER / AP)

"We wished that he would have played. His replacement, Ramos, has hurt us," Yakin told reporters on Wednesday.

With Portugal looking to make history of their own by reaching a first final - they lost to France in the 2006 semi-finals - Morocco will provide a test of their new-found sense of adventure and Santos' willingness to keep Ronaldo in reserve.