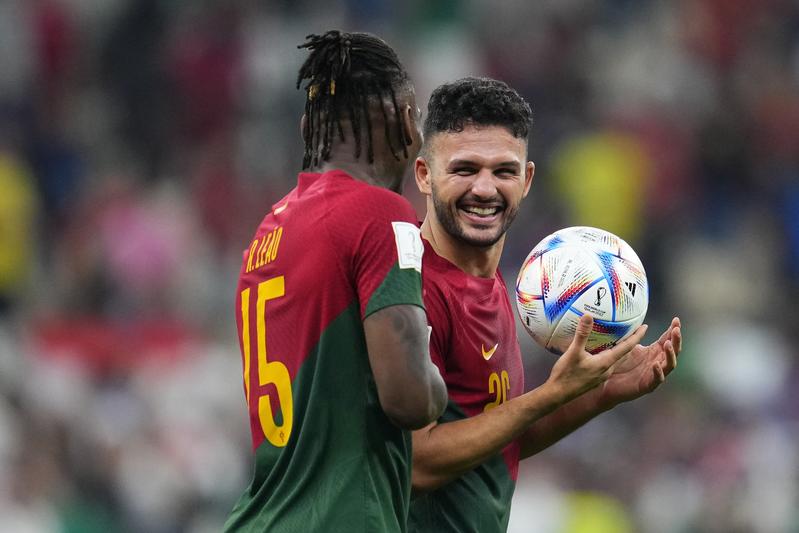 Portugal's Rafael Leao (left) and Portugal's Goncalo Ramos celebrate after the win during the World Cup round of 16 soccer match between Portugal and Switzerland, at the Lusail Stadium in Lusail, Qatar, Dec 6, 2022. (NATACHA PISARENKO / AP)

DOHA - Portugal coach Fernando Santos put his faith in Goncalo Ramos when he started him against Switzerland, and the young striker responded by scoring a hat-trick and leading them to the World Cup quarterfinals for the first time since 2006.

Ramos, 21, made headlines when the teams were announced, picked to lead the attack in place of Portugal's all-time leading scorer Cristiano Ronaldo who was relegated to the bench.

It did not take long for the youngster to become one of the biggest stories of the Qatar World Cup.

Ramos made his debut in Portugal's 4-0 win over Nigeria in a warm-up game before the World Cup and played a total of 10 minutes as a substitute in two of the three group matches.

This AFP graphic dated Dec 8, 2022 shows the preview of the match between Morocco and Portugal in the quarterfinals of the football World Cup in Qatar.

Morocco face a defensive dilemma after Nayef Aguerd was injured against Spain and with doubts about his fitness, Walid Regragui will probably have to assign captain Romain Saiss the task of marking Ramos

He opened the scoring against Switzerland with a stunning strike at the near post after 17 minutes and added a second in the 51st when he put the ball through keeper Yann Sommer's legs before helping tee up Raphael Guerreiro's goal four minutes later.

He completed his hat-trick when he latched on to Joao Felix's pass and lifted the ball deftly over the advancing Sommer, smiling and repeating for a third time his two-gun celebration before being substituted.

The Benfica striker's treble made him the first player to score a hat-trick in his first World Cup start since Miroslav Klose against Saudi Arabia in 2002, and he is in contention for the golden boot with France striker Kylian Mbappe leading the way on five goals.

Perhaps Ramos, who helped Benfica reach the Champions League last 16 this season, benefited from being the third striker in the squad behind Ronaldo and Andre Silva.

He will now be firmly in the spotlight when Morocco coach Walid Regragui considers his tactics. 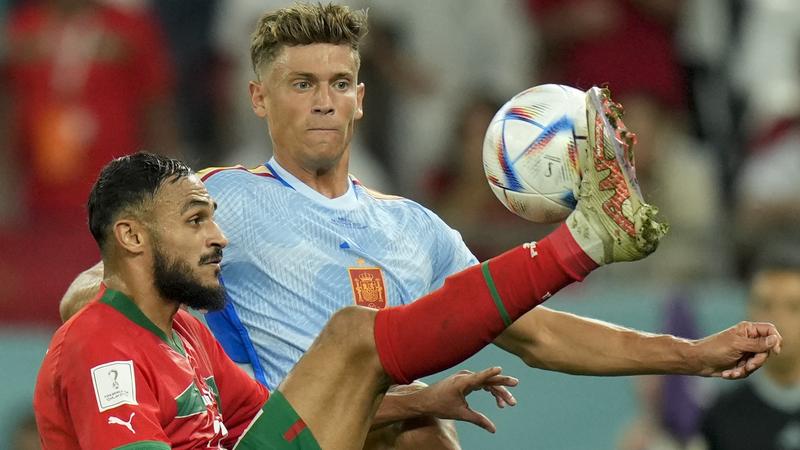 Morocco's Sofiane Boufal (left) and Spain's Marcos Llorente battle for the ball during the World Cup round of 16 soccer match between Morocco and Spain, at the Education City Stadium in Al Rayyan, Qatar, Dec 6, 2022. (FRANCISCO SECO / AP)

Morocco face a defensive dilemma after Nayef Aguerd was injured against Spain and with doubts about his fitness, Regragui will probably have to assign captain Romain Saiss the task of marking Ramos.

Saiss is an experienced campaigner having played six seasons for Wolverhampton Wanderers in the English Premier League where his former coach Bruno Lage described him as "the Maldini of Morocco", in a glowing reference to former Italy defender Paolo Maldini. 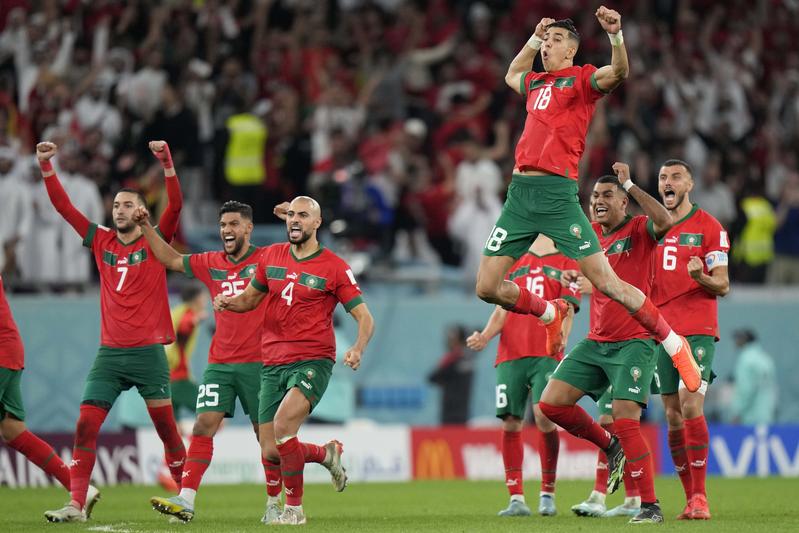 Morocco's Jawad El Yamiq (top) celebrates with team mates after the penalty shootout at the World Cup round of 16 soccer match between Morocco and Spain, at the Education City Stadium in Al Rayyan, Qatar, Dec 6, 2022. (LUCA BRUNO / AP)

Morocco have conceded only one goal in four matches, an own goal by Aguerd against Canada, and are one of only four teams to reach the quarter-finals without losing a match, so Ramos will need to be at his sharpest to continue his dream start.