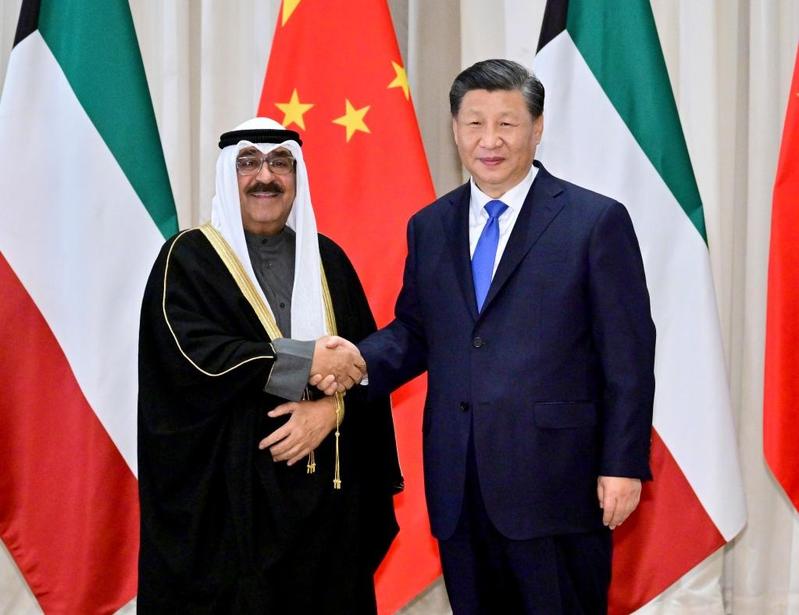 China stands ready to strengthen communication and coordination with Kuwait in regional and international affairs to contribute to the common development and security of all countries, President Xi said

Xi said Iraq was one of the first Arab countries to establish diplomatic ties with the People's Republic of China, adding that since the establishment of the strategic partnership between the two countries in 2015, China-Iraq relations have seen sound and stable development, while bilateral cooperation in various fields has made steady progress.

China appreciates that Iraq has always firmly supported China on issues concerning China's core interests, and will continue to firmly support Iraq in safeguarding national sovereignty, independence and territorial integrity, and to back all factions in Iraq to strengthen unity and cooperation, Xi said.

China is willing to work hand in hand with Iraq to continuously deepen the China-Iraq strategic partnership, he added.

China believes Iraq will continue to guarantee the security of Chinese personnel, institutes and projects and appreciates Iraq's active support for the Global Development Initiative and welcomes it to join the Global Security Initiative, Xi said.

He said China appreciates Iraq's support for and promotion of the China-Arab collective cooperation and is willing to work together with Iraq to implement well the achievements of the first China-Arab States Summit to push the China-Arab strategic partnership to a higher level.

Noting that exchanges between the civilizations of Iraq and China are thousands of years old, al-Sudani said China is a special friend of Iraq with friendly and solid bilateral relations.

China serves as an example and role model for developing countries, and as an important player in the multi-polar world, China advocates and practices common development and opposes colonial plunder, he said.

Iraq admires China's great achievements in poverty alleviation and other areas, and is willing to learn from and draw on China's successful experience, he noted.

Al-Sudani said Iraq stands ready to be an important partner of China in promoting Belt and Road cooperation, welcomes China to continue to actively participate in constructing major infrastructure and energy projects in Iraq and invest further into Iraq's chemicals, electricity and other areas, and is willing to strengthen exchanges and cooperation with China on counter-terrorism and eradication of extremism.

The Iraqi prime minister said he has every confidence in the complete success of the upcoming first summit between China and Arab states to be held on Friday afternoon.

On the bilateral ties with Kuwait, Xi said China is willing to continue to be a reliable partner of Kuwait and work together with Kuwait to create a better future for China-Kuwait relations.

Xi emphasized that China supports Kuwait in implementing its Vision 2035 and is ready to strengthen the docking of development strategies between the two countries, actively participate in the construction of major projects of Kuwait, tap the potential of cooperation in new energy, 5G communication, digital economy and other fields, and support cultural exchanges and cooperation.

The first China-Arab States Summit and the China-Gulf Cooperation Council (GCC) Summit are milestone events, Xi said, adding that China is ready to work with Kuwait to promote greater development of China-Arab and China-GCC relations.

China congratulates Kuwait on becoming a dialogue partner of the Shanghai Cooperation Organization and a member state of the Conference on Interaction and Confidence Building Measures in Asia, Xi said, commending Kuwait for supporting the Global Development Initiative. 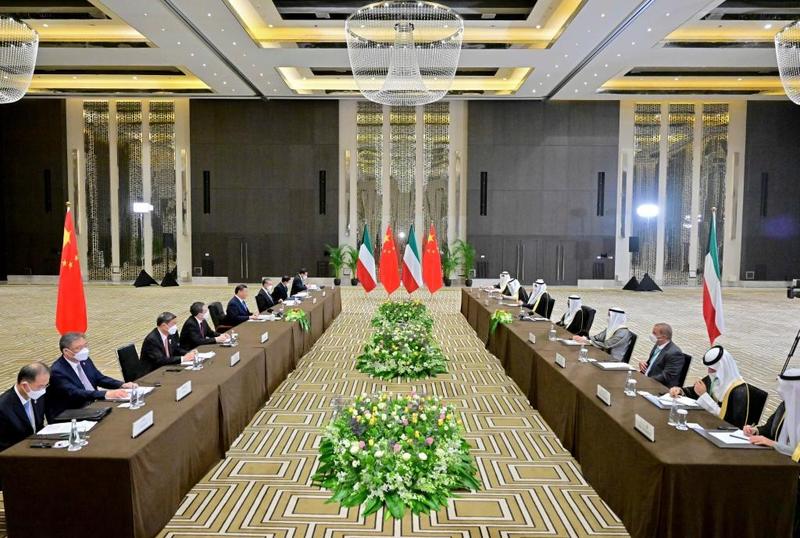 Calling China a great country, Crown Prince of Kuwait Sheikh Mishal Al-Ahmad Al-Jaber Al-Sabah said that both countries enjoy a time-honored friendship, and the two countries are as close as brothers

China stands ready to strengthen communication and coordination with Kuwait in regional and international affairs to contribute to the common development and security of all countries, Xi said.

Calling China a great country, the Kuwaiti crown prince said that Kuwait and China enjoy a time-honored friendship, and the two countries are as close as brothers.

China is committed to the equality of all countries, big or small, and non-interference in other countries' internal affairs, he said, noting that China is also committed to the well-being of the people of the world.

A series of important initiatives and measures put forward by China are beneficial to the world, he added.

Noting that Kuwait will always have a friend in China, the Kuwaiti crown prince, on behalf of the Kuwaiti people, congratulated Xi on his election as general secretary of the Central Committee of the Communist Party of China.

He expressed belief that under Xi's wise leadership, China will continue to develop and fulfill the mission of realizing the great rejuvenation of the Chinese nation.

The Kuwaiti side abides by the one-China principle and is ready to make joint efforts with China to deepen mutually beneficial cooperation in various fields and open up new prospects for bilateral strategic relations, he said.