Award-winning photographer, who has mastered the art of the microscope, captures stunning images of an infinitesimal world, Yang Feiyue reports. 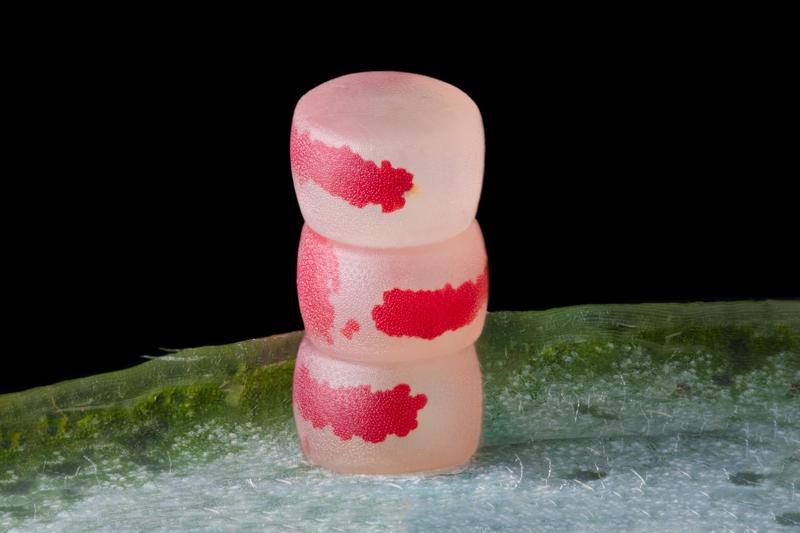 There are countless microscopic wonders that the naked eye might not be able to see, but they are just as real, or even more so, as our sighted perceptions of the world.

Thanks to photographers who have mastered the art of magnifying and capturing the minuscule, the stunning worlds of the invisible have been presented to public gaze. They range from fluorescent depictions of tissue cells and blood vessels to magnified shots of insects and microscopic organisms.

Looking for eggs is a very difficult thing, and you must be familiar with the plants that their larvae like to eat, before trying to find their eggs on the leaves of those plants. It needs a lot of experience and knowledge accumulation.

Zhang Yefei is one of these photographers. His special interest in the microscopic world of the life cycle of insects, including their eggs and incubation, has brought him an international photography accolade that is rare among nonscientists.

The 41-year-old software engineer from Jiangyin, Jiangsu province, managed to use his camera to depict the vivid detail of moth eggs and it won him a top 20 award at the 2022 Nikon Small World Competition in October.

His work shows a tiny exotic tower, which, in actual fact, is a stack of moth eggs magnified 10 times.

"I found these three moth eggs on a very small leaf, and they were strangely superimposed together," Zhang says.

"There were no red markings on the surface of the moth eggs when they were first found. Over the next two days, the inside of the moth's eggs continued to develop, and beautiful red markings appeared," he says.

Zhang was the third Chinese photographer to win an award at the competition, which was launched in 1975. It has been seen as a means to recognize and applaud the efforts of those involved with photography utilizing a light microscope. The competition has become a leading showcase for photomicrographers from a wide array of scientific disciplines. Participants include university professors, practicing scientists, nature enthusiasts, photographers and doctoral students.

Zhang's work stood out among approximately 1,300 entries submitted from 72 countries and regions. 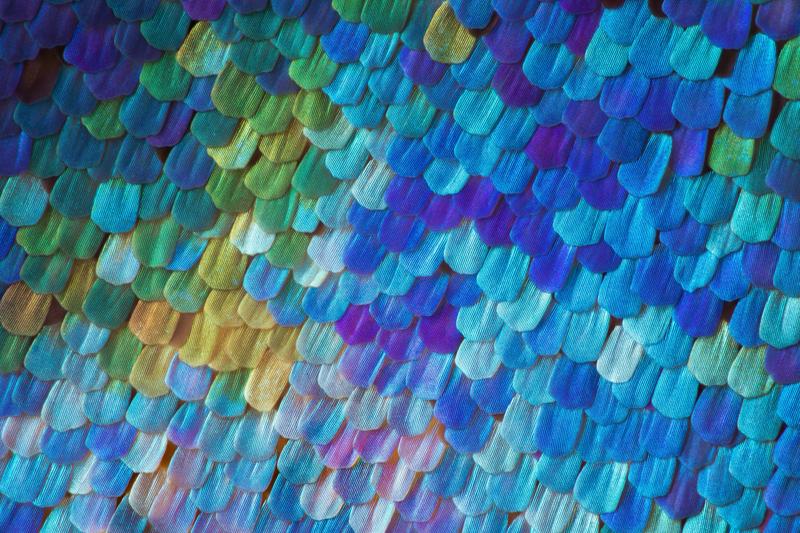 Butterfly scales and the life cycle of those insects have been brought to light by Zhang through the art of photomicrography. (PHOTO PROVIDED TO CHINA DAILY)

In the past two years, Zhang has focused on photographing the eggs of hundreds of butterfly and moth species, and the prizewinning shot was of moth eggs he found on Machilus bombycina, known locally as the "yellow heart" tree.

"One characteristic of moth eggs is that they are usually laid on top of one another in stacks," he says.

Unlike the butterfly eggs that are mostly different in shape and size, moth eggs look similar, so it is impossible to trace them back to their species, unless it's through DNA identification, Zhang says.

He believes that the biggest characteristic of his work is rarity, as very few people tend to aim their lens at butterfly or moth eggs.

"Looking for eggs is a very difficult thing, and you must be familiar with the plants that their larvae like to eat, before trying to find their eggs on the leaves of those plants," Zhang says. "It needs a lot of experience and knowledge accumulation." 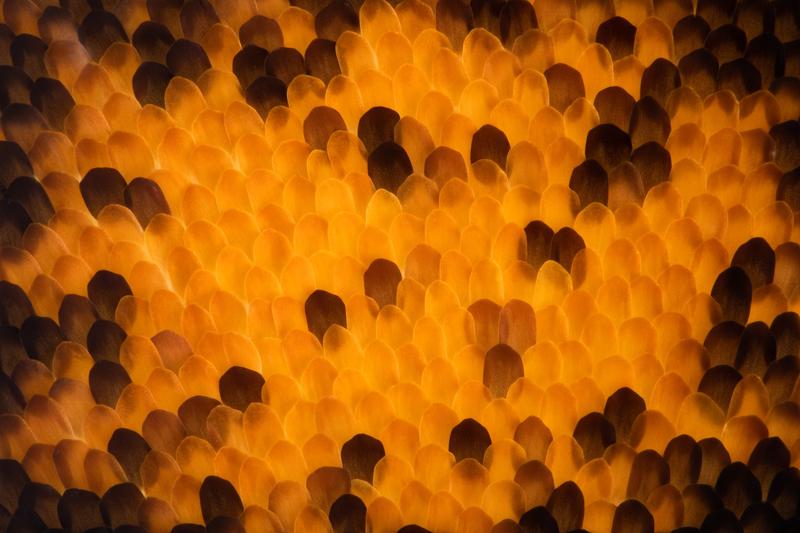 Butterfly scales and the life cycle of those insects have been brought to light by Zhang through the art of photomicrography. (PHOTO PROVIDED TO CHINA DAILY)

He usually takes a magnifying glass during his trips to the wilderness, searching the leaves for the eggs that are often less than a millimeter in width, like Sherlock Holmes looking for clues.

"It is as tiny as the tip of a needle, and you can barely tell what color or characteristics it has with the naked eye," Zhang says.

Yet, a whole new world unfolds under the microscope.

After finding the eggs, Zhang will take them home along with the leaves, and start the process of photographing them in the makeshift studio he has set up at home. 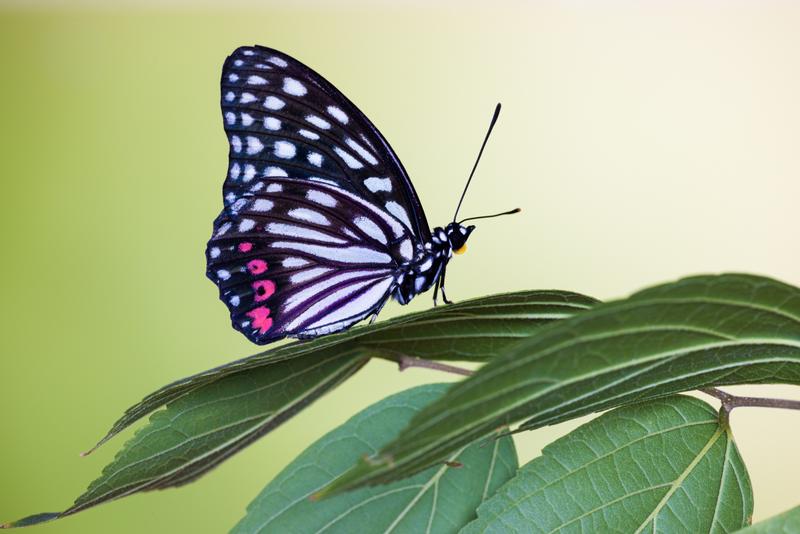 Butterflies have been brought to light by Zhang through the art of photomicrography. (PHOTO PROVIDED TO CHINA DAILY)

Quite different from conventional photography, enthusiasts like Zhang use a microscope as a lens to capture every single 1 mm egg.

Moreover, Zhang had to custom-make certain equipment, such as a tube lens and diffuser caps that are not readily available on the retail market.

"The technical parameters can be found online, but you have to buy the parts and put them together yourself," Zhang says.

Even when everything is in place, he can only capture a small part of the egg using the equipment setup he has.

"If you look at one photo alone, you will see that only a small area (of the egg) is in sharp focus and the rest of it is blurred, so microphotography requires a large number of photos to be stacked together to produce a full picture of the object," Zhang explains. 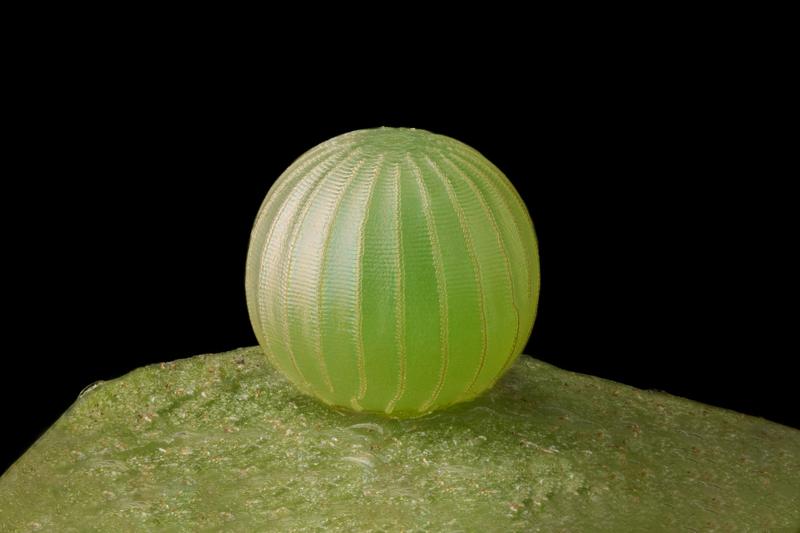 It normally takes 500 to 1,000 photos for Zhang to fully present an egg, due to the continuous changes in position of the depth of field.

Then, through computer technology, these photos are combined in a way where all clear parts are put in the right place.

"I once used more than 1,700 images to synthesize a photo, with each image being about 100 megabytes. The computer had some difficulty processing them," he recalls.

Later, he began using special stacking software to improve the efficiency of his work.

If one photo takes four seconds to take, 1,000 photos will need 4,000 seconds. And that does not include all the preparatory intervals. 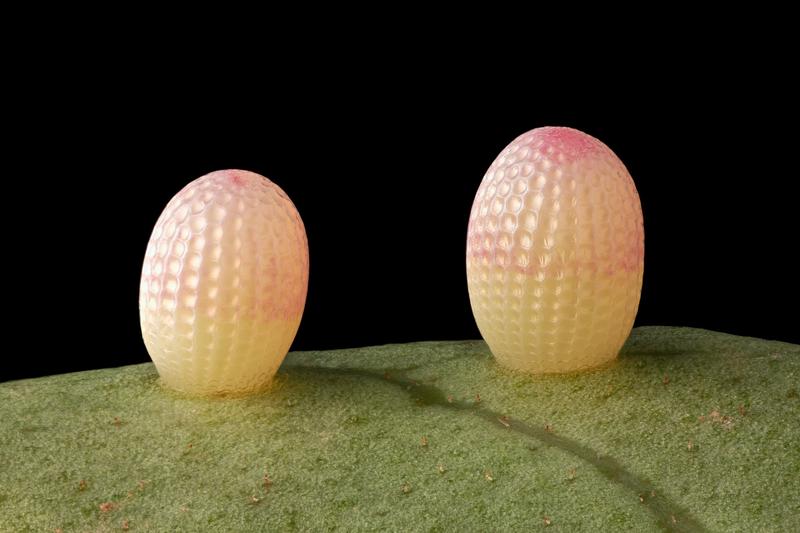 That is a long enough period of time for a leaf to deform due to various factors, such as evaporation.

"It is not discernible to the naked eye, but will be magnified under the microscope to make photo synchronization difficult," Zhang says.

Ingeniously, he found a way to use a pin to secure the leaf to minimize the amount of deformation.

Likewise, an actual heartbeat can cause minor shakes big enough to ruin the pictures.

"We may feel that objects like a table are very smooth and solid, but in fact, they are prone to subtle changes with any movement in the room," Zhang says.

He will push the table against the wall to steady it, and air conditioning has to be shut off during shooting.

"I also ask my daughter not to walk around in her room for a while," he says.

On average, it takes him about six hours to finish a single piece, with the longest one taking 21 hours. 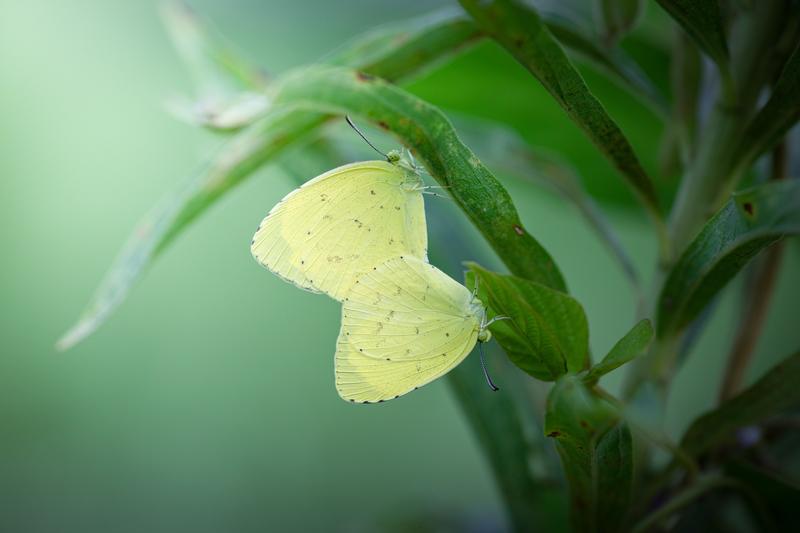 Butterflies have been brought to light by Zhang through the art of photomicrography. (PHOTO PROVIDED TO CHINA DAILY)

While he takes photos of the eggs, he also looks them up in research books and even compares academic descriptions against his observations to make sure they are consistent.

"After all, due to technical limits, researchers from the past might miss some details at the microscopic level," Zhang explains.

Along with the challenges come surprises.

As Zhang uses LED lights to illuminate the pictures, the temperature can accelerate the incubation of the eggs, which enables him to observe the full process from the larva shedding its skin, to its pupation and eventual transformation into a butterfly.

"Every point is worth being photographed and it is proof of how the infinitesimal can be of infinite greatness," Zhang says. 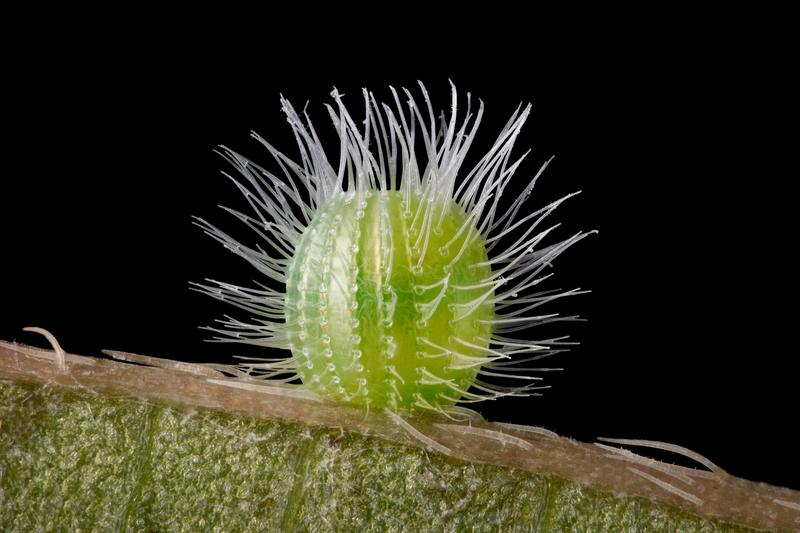 The microscopic world piqued Zhang's interest in 2020, when he was amazed by a friend who has focused on taking photos of butterflies and their eggs for more than two decades.

"I was amazed by them. They were so colorful and beautiful," he says.

He started spending his spare time learning how to identify and find them.

To date, Zhang has framed the images of eggs from hundreds of species of butterflies.

"Some look like corn, some resemble cucumber or blue lotus flowers, while others have 'thorns'," he says, adding that he feels proud that people appreciate his work as being rare and revealing.

He admits that the work takes a good deal of time and energy, but his family has been supportive. 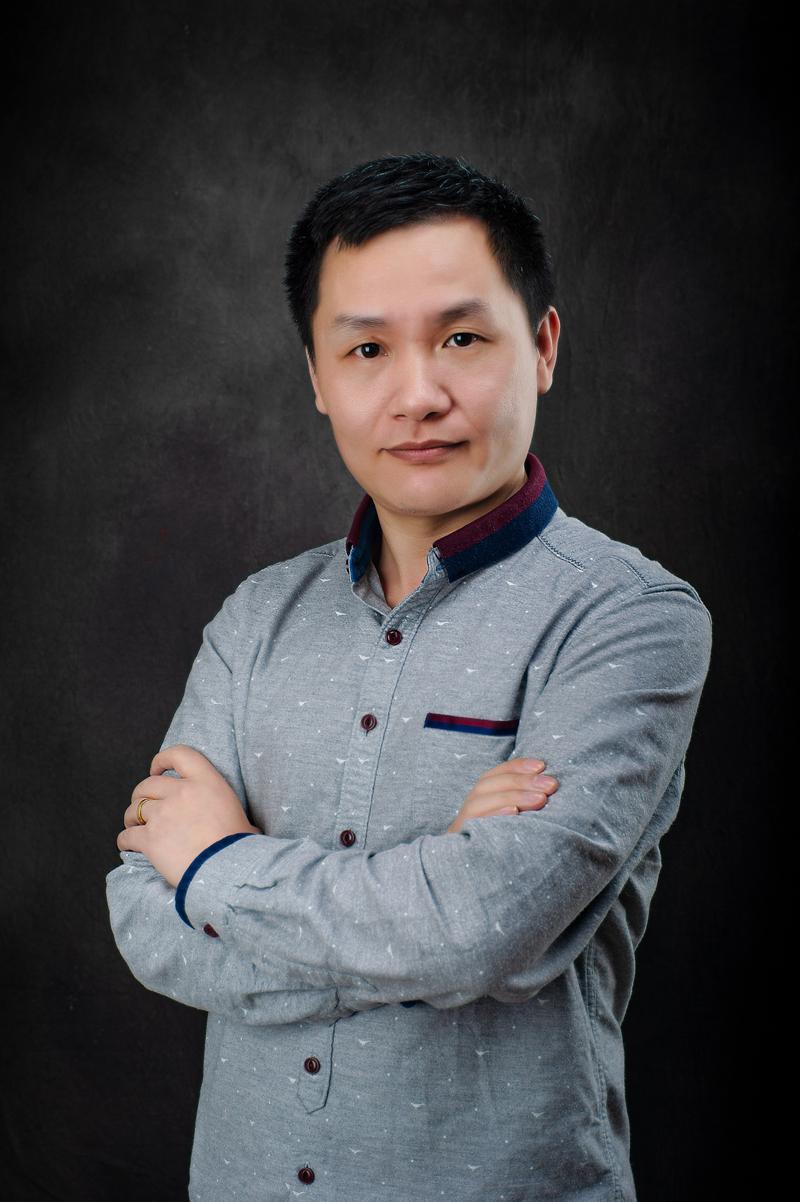 Yuan Ji, also a photomicrographer, has been studying the trade with Zhang for years.

"Microscopic photography is more technical than the common understanding of photography," Yuan says.

"In addition to visible light, infrared and ultraviolet light will be applied for imaging, which usually requires the use of scientific equipment."

At the moment, photomicrography is mostly confined to scientific studies and only about 100 people in China are engaged in it as an interest, according to Yuan.

For Zhang, winning the international prize only fuels his enthusiasm to continue his exploration of the invisible world.

"I'll try and find more interesting aspects of the microscopic world and bring them to light," Zhang says.