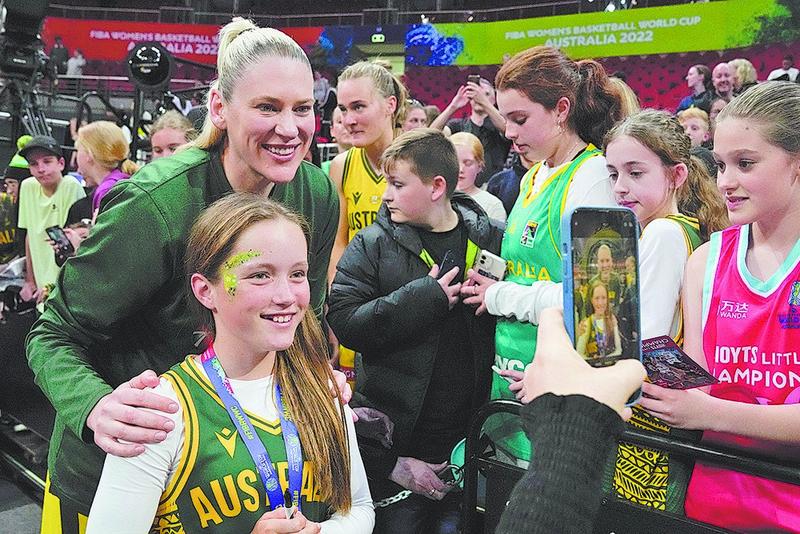 Lauren Jackson poses for a photo with a young fan following Australia's win over Japan at the FIBA Women's Basketball World Cup in Sydney on Sept 27, 2022. (PHOTO / AGENCIES)

SYDNEY — Thirty minutes after Australia knocked off Canada in the preliminary round of the FIBA Women's Basketball World Cup, Lauren Jackson was back on the court signing autographs and posing for selfies with hundreds of adoring fans.

They couldn't get enough of the Australian star and she reciprocated the love, not wanting to leave even when a security guard tried to get her to go back to the locker room.

The 41-year-old mom has been soaking in every minute of her impressive comeback story that has Australia in the knockout stage and drawing over 9,000 fans to some of their games.

"It's special. I really could never have imagined I got the reception I've had the past week," Jackson said. "It's been more special than anything to me. I couldn't have ever imagined it. To be here and be a part of it. I'm still pinching myself. I still can't believe I'm in the green and gold."

Among the crowd were five fans wearing G.O.A.T. masks in honor of the greatest player in the history of Australian basketball.

"I don't think she's just one of the greatest international players, but one of the greatest ever in the history of the sport," former WNBA president Val Ackerman said. "I recall her being among the first of the multidimensional post players. She's 6-foot-5 (1.96 meters) but could handle the ball, pass and shoot the 3. It's the first time I could recall seeing that in post players."

Jackson has been a force everywhere she has played.

Lauren Jackson averaged 18.9 points during her WNBA career with Seattle where she won two championships. She also won league titles in Australia, Spain and Russia as well as three Olympic silver medals and one bronze

She averaged 18.9 points during her WNBA career with Seattle where she won two championships. She also won league titles in Australia, Spain and Russia as well as three Olympic silver medals and one bronze. Jackson helped Australia win its lone gold medal in the 2006 world championship.

She retired from playing in 2016 after knee injuries derailed her career. Jackson, who has two sons — Harry and Lenny, had hoped to compete in the Olympics in 2016 but an ACL injury ended that dream. She stopped playing in the WNBA in 2012, walking away as one of the best players in league history.

Jackson had no intentions of playing again competitively after having a partial replacement on her right knee and dealing with the ACL tear that was followed by a staph infection. The former WNBA MVP acknowledges she had become reliant on painkillers, anti-inflammatories, sleeping pills and antidepressants at the end of her playing career.

Things started to change about 13 months ago. That's when Jackson was part of a trial for medical cannabis and that seemed to help.

Jackson started working out again a few months later — she had gained nearly 50 pounds (23 kilograms) since retiring. She was working out with the coach of her hometown team, Albury.

Matt Paps, the coach of Albury, told Jackson that he'd love to have her come back and play. Now with the comeback complete she's taken the Opals to within touching distance of medaling at home.

"I don't believe in fairytales," Jackson said. "I just don't. But if it ends today, if it ends tomorrow, I don't care. I've had the ride of my life."

Jackson, who is wearing No 25 to signify her 25 years with the Opals, is more of a role player now than she was earlier in her Hall of Fame career. Ahead of Thursday night's quarterfinal against Belgium, she had averaged 5.8 points while playing a little more than eight minutes a game.

"Lauren's not the Lauren of old now, but she's still going to be there for us," said Australia coach Sandy Brondello.

Like Ackerman, the coach said that her former teammate is one of the best to ever play. "Without a doubt, she's the top three in the whole world regardless of where she's from," Brondello said.

In her latest run with her mates, Jackson is providing valued leadership for the Opals. After an opening loss to France, she gave an impassioned speech to her teammates. They responded, winning the next four games to win their group.

"It was angry mom time," Jackson said laughing. "I had some choice words. We know what it takes to win and to have this opportunity to play in front of a home crowd we have to play with pride and that's what it took."

Jackson said despite how much fun she is having, she doesn't expect to compete for the Opals after this. She'll be 43 when the Olympics are in Paris in two years.

"No way. No, Nothing can top this," she said. "Honestly, nothing can top it. The fact we got through to the quarterfinals, this is the pool of death. People thought after Game 1 we might be on the way out. They are going to be moving forward. They got it. They know what it takes now. It's pretty awesome I get to be a part of it."