Three years ago, cultural relics handler Wang Jingshi flew from Macao to Beijing. On the seat next to him was a box tightly secured with eight tension belts. This special "passenger" was the first to board the plane and the last to leave.

A bronze horse's head looted by foreign troops from the Old Summer Palace 160 years ago, which is one of the nation's most iconic treasures, lay under several layers of packaging in the box.

Wang was returning the figure to the motherland, from which it had long been parted.

In June, he sat in a minivan — part of a motorcade — heading to the Hong Kong Palace Museum, which opened the following month.

Police motorcycles flanked trucks loaded with hundreds of rare national treasures from the Palace Museum in Beijing, which went on display in Hong Kong. Wang was taking part in the largest overseas loan of cultural relics in the Beijing museum's history.

Whether he is returning plundered artifacts, or loaning museum collections for exhibitions, Wang diligently escorts national treasures safely to their destinations, even amid the COVID-19 pandemic.

These treasures serve as unique bonds between people on both sides of the border, and the cross-border communication involved in transferring the artifacts continues to evolve, Wang said.

In 1997, Huaxie International Fine Art Freight Services Co paved the way for Hong Kong's first large-scale exhibition of cultural relics from the mainland to celebrate the city's return to the motherland. Some 200 national treasures from more than 30 leading museums and research institutes nationwide were displayed in the city.

After helping stage several more cross-border exhibitions, the company has delivered mainland cultural relics to Hong Kong for displays almost every year since 2014.

Many rare national treasures never displayed in public before have made their debuts in Hong Kong.

Among more than 900 artifacts loaned by the Palace Museum in Beijing to the Hong Kong Palace Museum for its opening exhibitions in July, many paintings went on show for a month, before being returned to warehouses in Beijing for at least three years for preservation.

Handling these precious and fragile objects requires special attention. Each one is placed in a specially designed box, and then kept in a wooden box with other treasures. Delicate and fragile items, such as clocks, silk fabrics and paintings, are wrapped in up to seven layers of protective material to safeguard them in transit.

A six-strong team comprising Wang, his colleagues and experts from the Palace Museum was formed to hang a 4-meter-high painting of a horse on a wall at the Hong Kong venue.

Two employees on an elevated electrical platform unfolded the painting from the top, two others on ladders handled the center, and the other pair took care of the work on the ground.

As a result of these joint efforts, the full scale of the masterpiece was gradually revealed.

Painted by the Italian artist Giuseppe Castiglione, the work depicts one of the 10 favorite horses of Emperor Qianlong (1711-99). Given the painting's huge size, it had never been exhibited in public before.

The Hong Kong Palace Museum made a 5-meter-high showcase to accommodate the painting, the largest such cabinet among more than 900 at the venue.

Wang, who is particularly fond of calligraphy and paintings, used breaks from his work at the Hong Kong museum to fully appreciate the masterpieces from Beijing, most of which he had never seen before. 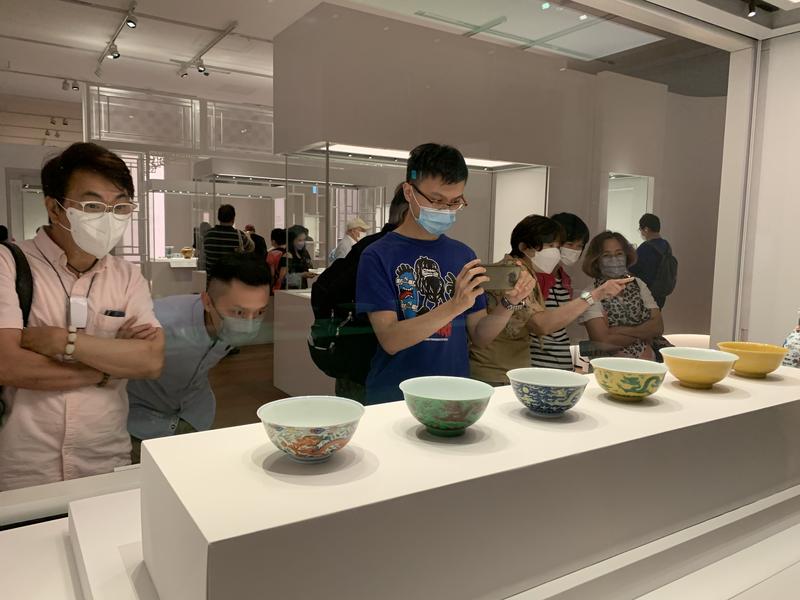 Meanwhile, the categories of cross-border exhibitions have become more diversified.

In addition to the nation's top collections, countless themed exhibitions have been staged to present cultural relics in various categories. Some showcased the achievements of the Palace Museum in restoring artifacts and Western science instruments it preserved, while others focused on the wedding ceremonies of emperors, as well as the life of China's last emperor Pu Yi. All these exhibitions attracted interest and curiosity among the public.

Some exhibitions also celebrated the centenary of China's 1911 Revolution, which marked the end of imperial rule, and others commemorated the nation's first spacewalk by Shenzhou VII astronauts in 2008.

The arrival of national treasures has been greeted passionately by communities in Hong Kong.

In 2007, the Palace Museum in Beijing loaned several paintings and works of calligraphy, including Along the River During the Qingming Festival by Zhang Zeduan (1085-1145), which created immense interest in the city. Three years later, a digital version of the painting was also displayed in Hong Kong, attracting a record-breaking 930,000 visitors, more than one-tenth of the city's population.

Given their extensive overseas connections, Hong Kong and Macao are also significant hubs for the recovery of looted national treasures.

The bronze horse's head escorted by Wang was looted from the Old Summer Palace by British and French troops during the Second Opium War (1856-60), along with 11 other zodiac animal heads and numerous national treasures.

Bought by late Macao tycoon Stanley Ho Hung-sun from a Taiwan collector in 2007, and donated to the nation in 2019, the figure was later preserved in a temple at the Summer Palace, becoming the venue's first important cultural relic to be returned to its home.

Zheng, a high-level official in charge of cultural affairs for the People's Republic of China in the 1950s, was tasked with recovering lost treasures from Hong Kong during that time. Due to his efforts, many precious works of calligraphy and art from the Tang (618-907) and Song (960-1279) dynasties were returned to the motherland.

The letters vividly document details and anecdotes from Zheng's mission. Bought by a mainland auction company at a sale in Hong Kong, they were later donated to the nation and kept at the National Library of China.

Wang believes that as China becomes more powerful, and the Hong Kong Special Administrative Region's cultural influence rises on the world stage, more cultural relics will be returned to the mainland via Hong Kong and Macao. 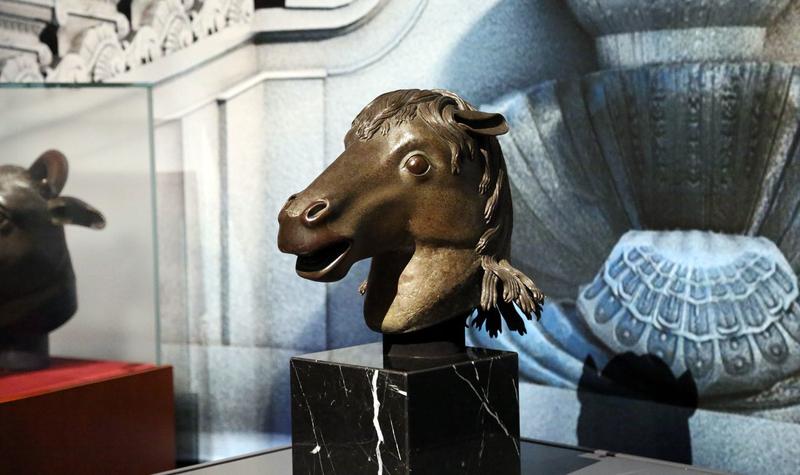 A bronze horse's head looted by foreign troops from the Old Summer Palace 160 years ago was returned to the mainland from Macao in 2019. (PHOTO PROVIDED TO CHINA DAILY)

Hong Kong, an ideal stage for showcasing the nation's history and culture, has also hosted many signature collections.

For example, master painter Wu Guanzhong (1919-2010) and his family donated more than 450 works to the Hong Kong Museum of Art. The museum, a key global center for collections of modern Chinese paintings and research, boasts the largest and most diverse collection of Wu's works.

It is also home to a highly valued collection of paintings by artists from the Ming Dynasty (1368-1644). Ming and Qing Dynasty (1644-1911) rule was stricken by nearly 100 years of warfare and turmoil. With China struggling to ward off domestic rebels and foreign invaders, patriotic Ming artists expressed grief and distress in their work.

Ma Fung-kwok, a Hong Kong legislator from the Election Committee who used to represent the sports, performing arts, culture and publication sectors, said the city and mainland have maintained a strong connection in exhibiting cultural relics in past decades.

Cross-border exhibitions not only give an economic boost to related cultural industries, but more important, they play a significant role for people on both sides of the border to better appreciate culture and artistic appeal. They also offer Hong Kong people a glimpse of the nation's storied history.

Given the city's status as a global arts trading center, Ma said Hong Kong has a large number of high-quality private collections of cultural relics, such as gold items, colored glaze, clothing and furniture.

He hopes there are more opportunities to exhibit such treasures on the mainland. Ma also envisions Hong Kong loaning the mainland exhibits representing the nation's diverse history — including those from prehistoric civilizations — for the public to form a more comprehensive understanding of the nation's past.

Abundant cultural resources in nearby cities can also be better used.

There are hundreds of small but distinctive museums in the Guangdong-Hong Kong-Macao Greater Bay Area. Dongguan boasts an Opium War museum, while Jiangmen has one that showcases the history and culture of overseas Chinese. Ma hopes various cities in the Bay Area hold a joint exhibition in Hong Kong.

In the long run, Hong Kong has huge potential to hold more top-level cross-regional exhibitions showcasing civilizations in countries taking part in the Belt and Road Initiative, or exchanges of Eastern and Western cultures. After being displayed in Hong Kong, mainland treasures could be exhibited overseas, and foreign collections could also be showcased on the mainland, Ma said.

She said close cross-border exchanges and the increasing need for high-quality culture have helped the cultural relics handling industry develop rapidly. More cultural enthusiasts and members of the public have learned about this work, and newcomers to the industry such as herself are adding input to the sector.

Although the pandemic has caused disruption for the past two and a half years, the industry has adapted to the situation thanks to the latest technologies. Offline examination of exhibits has shifted online, and a cloud-based monitoring system helps locate exhibits and tracks them during deliveries.

Zhang said the opening of the Hong Kong Palace Museum offers new hope for cross-border exchanges of cultural relics, and is expected to lead to more extensive collaboration.

She stressed that although technology adds quality to digital and online displays, nothing can compare with visiting an exhibition in person.

As long as there is a need for exhibitions, the arts handling industry will do its utmost to transport items for display, Zhang added.