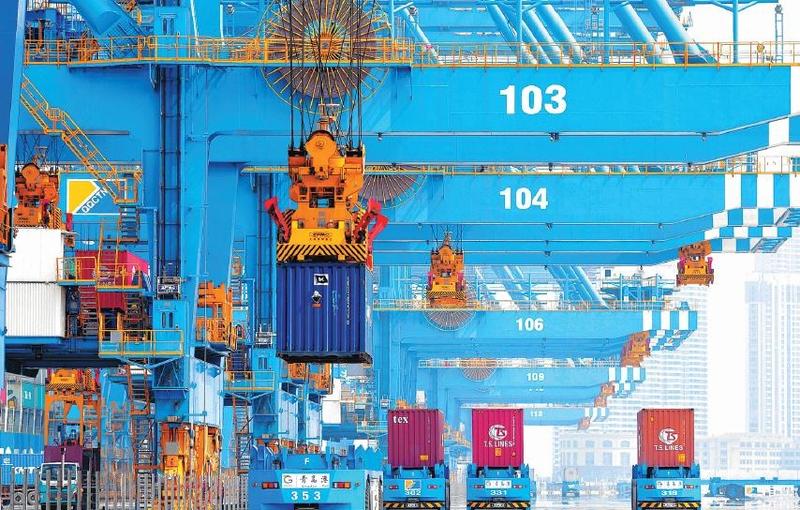 Containers are unloaded at Qingdao Port in Shandong province. (PHOTO BY YU FANGPING / FOR CHINA DAILY)

China will advance its free trade agreement strategy to effectively connect domestic and foreign markets and relevant resources, in terms of "expanding scope, improving quality and raising efficiency", the Ministry of Commerce said on Thursday.

China has signed 19 free trade agreements with 26 countries and regions, and its trade value with FTA partners accounts for around 35 percent of its total trade, data from the Ministry of Commerce showed

"Through that, China aims to provide institutional support for its high-level opening-up and better serve its construction of the new dual-circulation development pattern," said MOC Spokeswoman Shu Jueting at a news conference.

The new development pattern takes the domestic market as the mainstay while letting domestic and foreign markets reinforce each other.

The nation has signed 19 free trade agreements with 26 countries and regions, and its trade value with FTA partners accounts for around 35 percent of its total trade, data from the ministry showed.

"We will further increase the proportion of zero tariffs in goods trade, expand market access for investment and services trade, actively participate in negotiations on new rules for new fields such as the digital economy and environmental protection, and promote the construction of a new system for higher-level open economy," she said.

Shu also said the nation will intensify promotion and training on FTAs, to improve their utilization and bring more benefits to people and enterprises.

Analysts said China has been following international rules and practices such as the World Trade Organization's principles while furthering its higher-level opening-up, which is in sharp contrast to recent moves made by the United States.

Those US moves include the discriminatory electric vehicle subsidy provisions in the newly passed US Inflation Reduction Act and the decision to further scrutinize foreign investments and transactions.

"China has never set up special rules or standards targeting a specific nation, and the recent moves of the US are actually very discriminatory as they impose restrictions on certain industries and countries to serve US purposes," said Zhou Mi, a senior researcher at the Chinese Academy of International Trade and Economic Cooperation in Beijing.

"As the global supply chain suffers from instability, the US moves have sparked market worries over supply chain snarls, which could cause severe damage to the development of global trade," he said.

At the conference, Shu said China is concerned about the discriminatory electric vehicle subsidy provisions in the US Inflation Reduction Act.

The provisions concerned allow subsidies on preconditions like localized assembly of whole vehicles in North America, which constitutes discrimination against relevant imported products, she said, adding those provisions are suspected of violating WTO principles like most favored nation or MFN treatment and national treatment.

China will follow and evaluate the follow-up implementation of the US Inflation Reduction Act, and will take measures to safeguard its legitimate rights and interests, if necessary, she said.

She also said the US has been generalizing the concept of national security in recent years and making its reviews on foreign investment stricter and wider in scope, so as to create cumbersome procedures on purpose.

The US government should correct its abuse of security review and provide a fair, stable and predictable business environment for enterprises to conduct investment activities, she said.