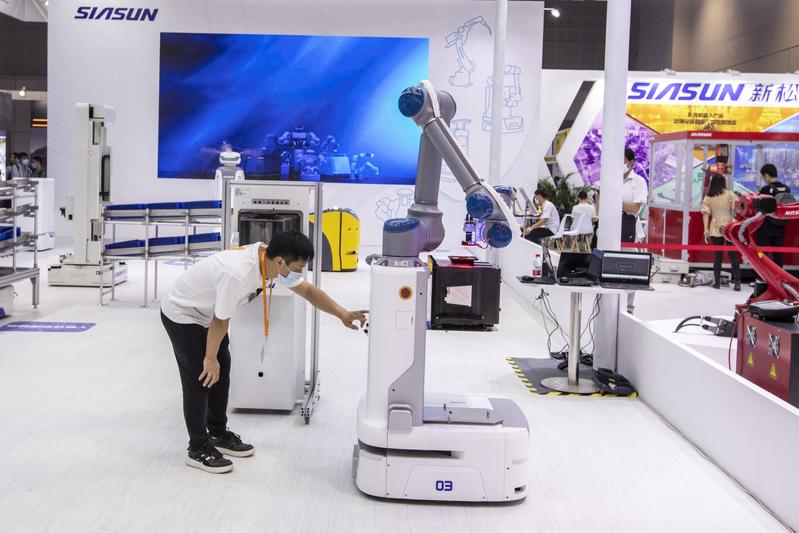 A visitor checks out an industrial robot at the booth of Siasun Robot & Automation Co during an industry expo in Shanghai in September 2020. (PHOTO PROVIDED TO CHINA DAILY)

Robotics technology has grown rapidly in recent years, integrating emerging technologies such as artificial intelligence and 5G. It is also boosting new products and new applications that can promote global economic development and people's well-being.

"The robotics industry is an important symbol of a country's technological strength and level of high-end manufacturing," Jin Zhuanglong, minister of industry and information technology, told the 2022 World Robot Conference held in Beijing in August.

Combined with emerging technologies such as AI, 5G and new biological materials, the robotics industry is entering a key period of strategic opportunity for development and upgrading, Jin said.

Robots, an important tool to promote digital transformation and boost the digital economy, are accelerating their integration into production and people's daily lives, said Wang Hong, deputy director of the first equipment industry department of the Ministry of Industry and Information Technology, adding that the industry has shown great development potential.

Wang said China has formed what is basically a whole industry chain ranging from robot parts to robot applications. "In the first half－while the development of the robotics industry slowed due to COVID-19－it has gradually picked up the pace."

Despite challenges, such as a complicated and grim international environment and pressure from COVID-19 outbreaks, China's robotics industry has witnessed considerable growth, officials said.

The institute's report forecasts that China's robotics market will continue to boom this year. The market is expected to reach $17.4 billion in 2022, with a five-year average annual growth rate of 22 percent. The industrial robot market is set to be valued at $8.7 billion, and the service robot market at $6.5 billion.

The production of industrial robots, buoyed by a series of supportive policies and the rapid development of emerging technologies, is growing quickly and has played a key role in boosting the industry's advancement.

Many Chinese industrial robot companies are seeing a revival in demand for their products, as customers such as new energy industry players have stepped up their production amid better containment of the COVID-19 pandemic.

The new energy industry is at a breakout point for the growth of robot applications, said Zhang Lei, vice-president of Siasun Robot &Automation Co, one of China's largest robotics firms.

China has seen rising demand for industrial and mobile robots from new energy's rapid development, and Siasun has been participating in the process, Zhang said. "Our mobile robots have been widely used in manufacturing plants of major new energy enterprises."

The decline in the production of industrial robots in the first half was mainly due to disruption caused by the pandemic, which slowed all sectors of society, and led to shortages of components that affected delivery, Zhang said.

But with the gradual normalization of activities and better containment of the pandemic, Zhang said he expects to see a notable rebound in the production of industrial robots in the coming months.

Milton Guerry, former president of the International Federation of Robotics, said, "China is by far the biggest robot market in the world in terms of annual sales and operational stock." IFR is a professional, nonprofit organization based in Germany.

Guerry said IFR's robot density statistics, based on the number of industrial robots per 10,000 employees, are a useful indicator of China's dynamic development. 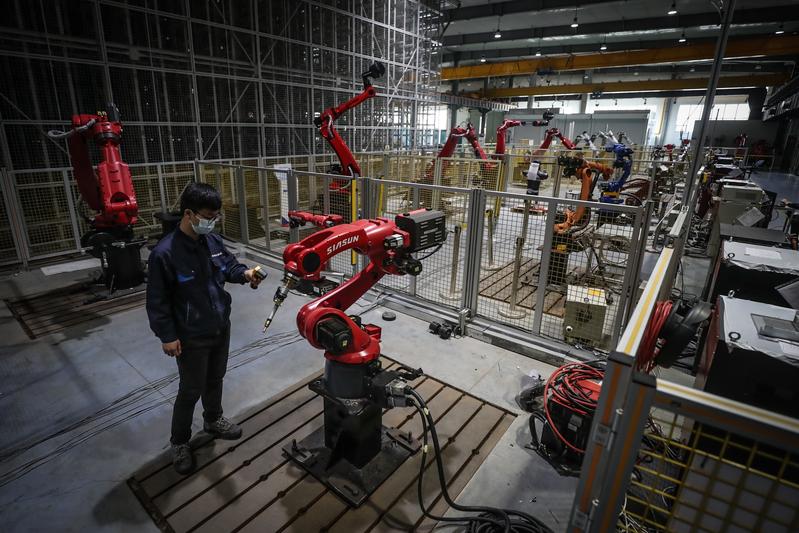 Chen Yu, a partner at Chinese venture capital firm Yunqi Partners, said he has seen high demand for robots in labor-intensive industries and industries that potentially put employees at high risk. "Few people like to work in those industries. Also, robots have big advantages over people in terms of standardization, safety and intelligence."

In the case of detection of defects in industrial products, traditional manual inspection is expensive and inspectors may miss problems or make mistakes, while using machine vision to detect defects can greatly improve efficiency and accuracy, experts said.

In the construction industry, workers are often exposed to harsh or difficult conditions such as heights, excess dust, loud noise or toxic gases. By introducing robots, efficiency can be improved and the safety of workers safeguarded, according to experts.

In addition, AI provides efficient digital technology useful to all industries in these times of the digital economy. The sensors of intelligent robots are able to examine the environment and collect data, process the information and make decisions through logical analysis and understanding, and then react to situations and complete tasks, Chen said.

"Robotics is particularly important to promote the transformation from traditional manufacturing to smart manufacturing. Robots have become the core equipment to make smart manufacturing happen and an integral part of smart factories," said Tao Yong, an associate research fellow at Beihang University in Beijing.

To meet current needs, robots are being updated rapidly. The new generation of robots, based on the previous two generations, incorporates technological innovations in fields such as materials, energy and life sciences, and extends human capability.

With the help of exoskeletal robots, adults can easily lift objects weighing hundreds of kilograms. Nanobots are being designed to enter human tissue for diagnostics and sample collection. As development progresses, robots are expected to replace even more human work and, in effect, help replenish the labor force.

Chen from Yunqi Partners said innovations in hardware and software technologies have played a driving role in the development of China's robotics industry. In hardware, domestically made core components account for more than half of the essential parts in the nation's robotics market.

The past decade has also witnessed the rapid development of software technology. Those widely used in robot intelligence include deep learning, which allows computers to solve more complex problems, cloud computing and other emerging technologies such as reinforcement learning, in which computers can learn from experience and modify their behavior. Chen said that software technology has become as important as hardware in the field of robotics.

Robots for delivery, cleaning, surgery and storage are particularly popular among investors, and many companies producing such robots have become unicorn companies, according to Chen. A unicorn company is a private company with a valuation exceeding $1 billion.

In 2021, the Ministry of Industry and Information Technology and 14 other central departments jointly released a new five-year plan for the development of the robotics industry from 2021 to 2025, focusing on promoting innovation and aiming to make China a global leader in robotics technology and industrial advancement.

"Although China's robotics industry is developing rapidly, it still suffers from practical difficulties, lack of core technologies and a large talent gap. More efforts should be made to develop technologies such as visual recognition, interactive motion controls and smart operations," said Tao from Beihang University.

He said the government should introduce more policies to encourage the development of the domestic robotics industry, and more efforts should be made to improve the supportive environment for enterprises and encourage purchases of domestically made robots.

He Jingwei contributed to this story.