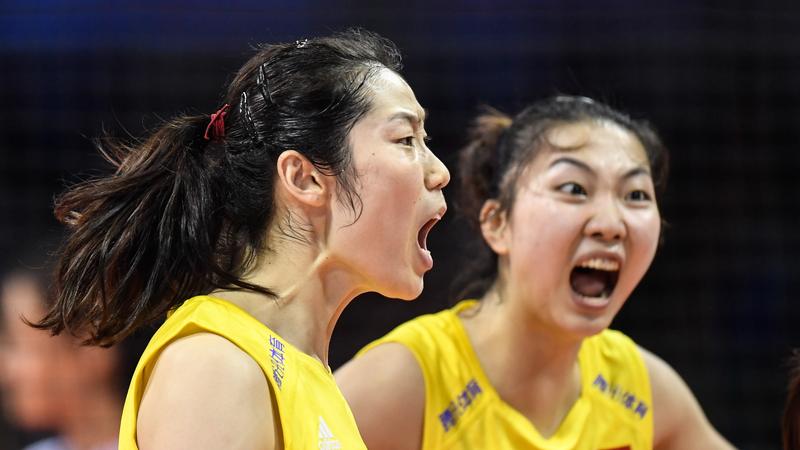 The Chinese women's volleyball team is steeled for some seriously tough challenges at the upcoming FIVB Women's World Championship in the Netherlands and Poland. But Cai Bin's rebuilding squad is not overawed by the task ahead and is relishing the chance to spring some surprises.

The top four teams from each of the four groups will advance to the second phase of the competition before battling it out for the eight quarterfinal spots. “We’re all pretty clear what we need to do to improve, and we are working together for the same goal

"I'm really looking forward to taking on the world's best teams. For myself and the rest of the squad, it will be a big challenge," said Team China captain Yuan Xinyue, who will represent her nation at the worlds for the third time.

"The world championship has always been our goal throughout our training, and we hope to make breakthroughs there. We hope to pose our rivals some problems and show our skills."

Team China opens its campaign against Argentina on Sept 25, before taking on Colombia, Japan, the Czech Republic and Brazil in Pool D.

The top four teams from each of the four groups will advance to the second phase of the competition before battling it out for the eight quarterfinal spots. “We’re all pretty clear what we need to do to improve, and we are working together for the same goal.

ALSD READ: China loses to Japan in final of AVC Cup for Women

We have been working hard on our weaknesses during this time,” Team China head coach Cai told media before leaving for the Netherlands.

“The preparation time for us was relatively short, but we tried hard to solve as many problems as we could.

Different from regular Olympics preparation, there are only three years before the Paris Games.

For most of the world’s best teams, their lineups have been very stable.

“These stable teams will have the edge, and those that have more new players will face challenges. So we need to work hard to improve our cooperation and facilitate the growth of our young players.”

The China Volleyball Association announced a provisional 16-player squad for the worlds on Saturday.

Captained by middle-blocker Yuan, the team is a blend of youth and experience, with star players Zhu Ting and Zhang Changning sidelined due to injuries. The final roster will be cut to 14 players before the opener against Argentina.

Since then, the squad has knuckled down to training with an emphasis on conditioning in order to cope with the intense weeks of competition ahead.

“The schedule of the world championship is very long, so our endurance and fitness will be key factors,” said Team China spiker Li Yingying.

The 22-year-old, who will be making her second appearance at the worlds, is one of the promising young stars trying to fill the sizable void left by Zhu’s absence. Li racked up 248 points at this year’s VNL to finish third in the tournament’s scoring chart.

“I still need to fix many problems in terms of my skills, so I can contribute more to our team. This year is different for me, as I have become the core player of the team. So I’m looking forward to the matches that await us,” Li added.

Not so long ago, Team China was the dominant force in women’s vollleyball, but having entered the Tokyo Olympics as defending champion last year failed to emerge from the group stage.

The shock early exit was China’s worst performance in the Olympic women’s volleyball tournament since its debut at the 1984 Games in Los Angeles, leading to the resignation of legendary coach Lang Ping.

With the arrival of new head coach Cai, a rebuilding process is underway. However, deprived of its injured star duo at the worlds, the squad is endeavoring to keep any expectations of a sudden upturn in check.

After all, the last time the Chinese women’s team won the world championship was 36 years ago in 1986.

“In different times we have different lineups, but as long as we return to the major international stage, we always put together the best and strongest lineup we have at the time,” said Team China’s core opposite spiker Gong Xiangyu.

“This is a brand-new lineup for us. I’m confident in the chemistry of the new team. I believe we will have good performances at the worlds.

“This is my second time representing Team China at the worlds. The schedule is different from the previous edition, so this will be a new challenge for me. I have gained more experience in the past few years, and I hope I can set an example for the younger players.”