President gets warm welcome in Samarkand

Xi greeted by top leaders of Uzbekistan as he arrives for state visit, SCO meeting 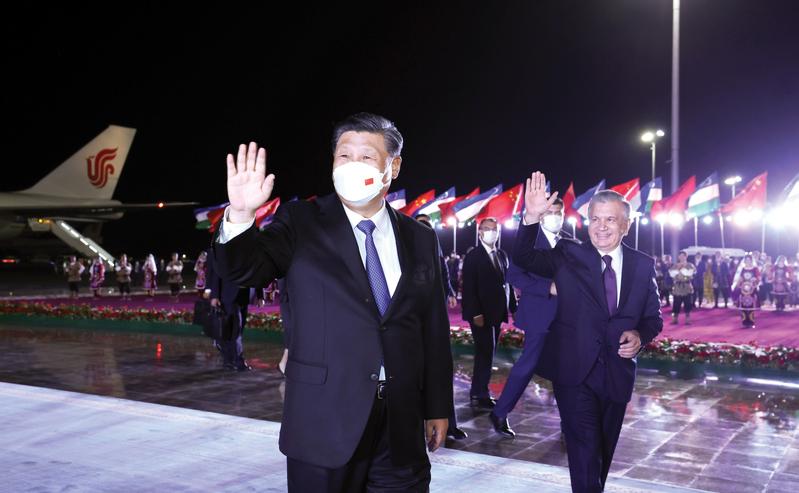 Chinese President Xi Jinping is warmly greeted by his Uzbek counterpart Shavkat Mirziyoyev and other top Uzbek officials at Samarkand airport on Sept 14. Xi is paying a state visit to Uzbekistan and attending the 22nd meeting of the Council of Heads of State of the Shanghai Cooperation Organisation. Ju Peng / Xinhua

SAMARKAND, Uzbekistan — Chinese President Xi Jinping arrived here in the evening on Sept 14 to pay a state visit to Uzbekistan and attend the 22nd meeting of the Council of Heads of State of the Shanghai Cooperation Organisation, or SCO.

Mirziyoyev held a grand welcoming ceremony for Xi at the airport, which saw nearly a hundred national flags of China and Uzbekistan waving in the breeze. A hundred-meter-long carpet was flanked by valiant honor guards. The two presidents stepped onto the reviewing stand adorned to reflect distinctive Uzbek features.

A fanfare was played on karnay, a traditional Uzbek long wind instrument, as a signal of welcome. Local young people, dressed in festive national costumes, sang and danced to the most invigorating beat to welcome the most honorable guest.

The China-Uzbekistan comprehensive strategic partnership has steered onto the fast track of development, not only benefiting people of the two countries, but also giving a strong boost to peace, stability, prosperity and development of the region, said Xi.

He said that he will hold talks with Mirziyoyev for an in-depth exchange of views on deepening bilateral cooperation, and on regional and international issues of shared interest, and jointly draw the blueprint for the development of China-Uzbekistan relations.

Xi also said that he looks forward to attending the SCO Samarkand Summit, and working with all parties to carry forward the Shanghai Spirit, deepen mutually beneficial cooperation, and promote the sound and steady development of the SCO.

Ding Xuexiang, Yang Jiechi, Wang Yi, He Lifeng and other members of the President Xi’s entourage arrived by the same flight.