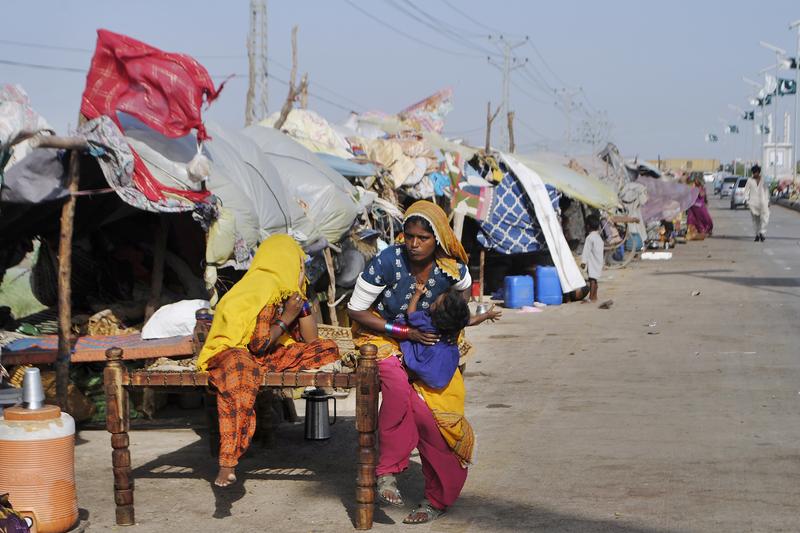 KARACHI, Pakistan - Children and women are becoming more vulnerable as tens of thousands of people suffer from infectious and water-borne diseases in flood-hit Pakistan, government data showed and UNICEF said on Friday, as the total death toll from the inundation surpassed 1,500.

As flood waters begin to drain away, which officials say may take two to six months in different areas, the flooded regions have become infested with diseases including malaria, dengue fever, diarrhoea and skin problems, the southern Sindh provincial government said in a report issued on Friday.

It said more than 90,000 people were treated on Thursday alone in the province, which has been the hardest hit by the cataclysmic floods.

The report of Sindh provincial government confirmed 588 malaria cases with another 10,604 suspected cases, in addition to the 17,977 diarrhoea and 20,064 skin disease cases reported on Thursday

The report confirmed 588 malaria cases with another 10,604 suspected cases, in addition to the 17,977 diarrhoea and 20,064 skin disease cases reported on Thursday. A total of 2.3 million patients have been treated since July 1 in the field and mobile hospitals set up in the flooded region.

Record monsoon rains in south and southwest Pakistan and glacial melt in northern areas triggered the flooding that has impacted nearly 33 million people in the South Asian nation of 220 million, sweeping away homes, crops, bridges, roads and livestock in damages estimated at US$30 billion.

The National Disaster Management Authority has reported 1,508 deaths, including 536 children and 308 women.

Hundreds of thousands of people who have been displaced are in dire need of support in term of food, shelter, clean drinking water, toilets, and medicines.

Many have been sleeping in the open by the side of elevated highways.

"I have been in flood-affected areas for the past two days. The situation for families is beyond bleak, and the stories I heard paint a desperate picture," said Abdullah Fadil, UNICEF Representative in Pakistan, after visiting the flooded areas.

"All of us on the ground see malnourished children battling diarrhoea and malaria, dengue fever, and many with painful skin conditions," he said in a statement.

He said a lot of the mothers were anaemic and malnourished themselves, and with very low-weight babies, being exhausted or ill and unable to breastfeed.

Millions of families are now living with little more than rags to protect themselves from the scorching sun as temperatures in some areas pass 40 C, Fadil said.

The torrential monsoon, which submerged huge swathes of Pakistan, was a one in a hundred-year event likely made more intense by climate change, scientists said on Thursday.