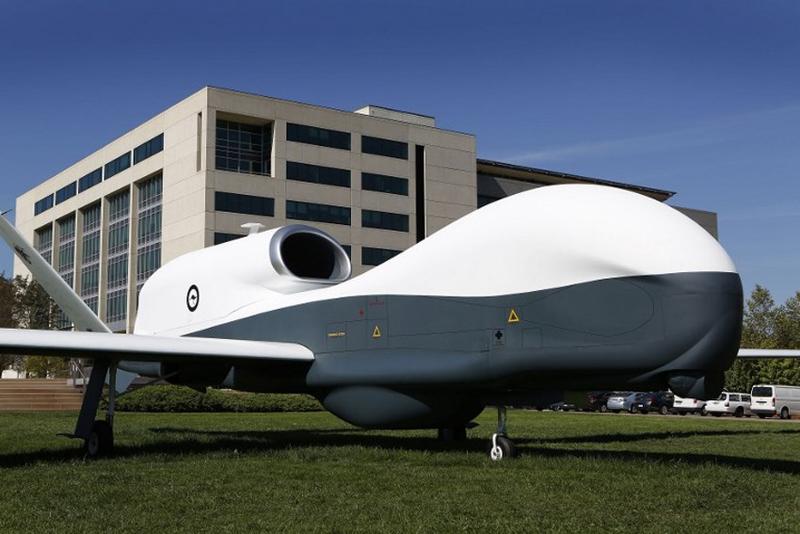 This handout photo taken on April 2, 2014 and received from the Australian Department of Defense on June 26, 2018 shows a full-size mock-up of the MQ-4C Triton Unmanned Aerial Vehicle in Canberra, Australia. (LAC MICHAEL GREEN / AUSTRALIAN DEPARTMENT OF DEFENCE / AFP)

Australia, to date the only non-US customer for the remotely piloted high-altitude, long-endurance aircraft, has so far ordered three to compliment its fleet of crewed Boeing Co P-8A Poseidon planes.

Australia, to date the only non-US customer for the remotely piloted high-altitude, long-endurance aircraft, has so far ordered three to compliment its fleet of crewed Boeing Co P-8A Poseidon planes

The first Australian aircraft was unveiled in California on Wednesday. It is due for delivery in mid-2024, and will be based primarily in Australia's tropical north but controlled from a base near the southern city of Adelaide.

Australia has been boosting its defense spending over the past few years. It agreed to buy nuclear submarines from the United States and Britain last year.

RAAF Head of Air Force Capability Air Vice-Marshal Robert Denney said at the Triton unveiling ceremony that the final number to be purchased would be decided after the review was completed.

"That defense review will take into consideration the decision not to proceed on SkyGuardian," he said, referring to Australia this year scrapping plans to buy up to 12 General Atomics-built MQ-9B armed medium-altitude long-endurance drones.

The addition of Triton will allow Australia's crewed P-8 planes to focus on anti-submarine warfare (ASW) rather than splitting their time between that and intelligence, surveillance and reconnaissance (ISR), said Doug Shaffer, Northrop Grumman vice president autonomous ISR and targeting programs.

"So a Navy maritime patrol gets 10 times more ISR and they free up the P-8 to focus on the ASW mission, so you get three times more ASW capability," he said in an interview. "That is really the force multiplier by having a manned-unmanned teaming."

The US Navy, which also has P-8s, has deployed Triton from Guam and Japan.