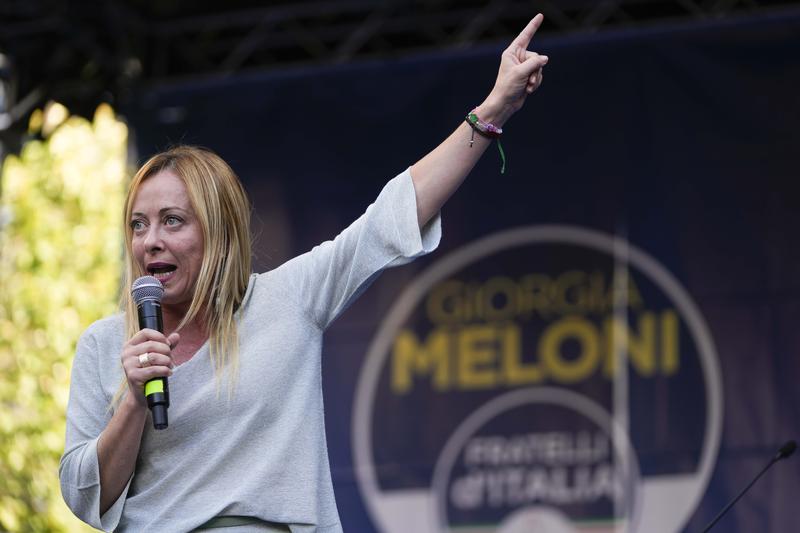 Right-wing party Brothers of Italy's leader Giorgia Meloni addresses a rally as she starts her political campaign ahead of Sept 25 general elections, in Ancona, Italy, on Aug 23, 2022. (DOMENICO STINELLIS / AP)

ROME – In her teens, Giorgia Meloni used to sneak out at the dead of night and help plaster her Rome neighborhood with far-right posters, playing a game of cat and mouse with leftist foes that could easily turn violent.

Fast forward 30 years and Meloni no longer needs clandestine sorties to get her message out. Instead, her image adorns billboards across the country ahead of elections on Sept 25 that could crown her as Italy's first female prime minister.

"It has been an incredible journey, but if I win the election, then that is not the end, it is really only the beginning," Meloni told Reuters last week from her parliamentary office that overlooks Rome's historic city center.

The rapid rise in Meloni's fortunes is intricately tied to the transformation of her own party, the Brothers of Italy, which has moved out of the shadows and into the mainstream, without ever fully repudiating its post-fascist roots.

Pollsters predict the group will emerge as Italy's largest party, taking up to 25 percent of the vote against just 4.3 percent in the 2018 election and leapfrogging once dominant allies – Matteo Salvini's League and Silvio Berlusconi's Forza Italia.

It has been an incredible journey, but if I win the election, then that is not the end, it is really only the beginning.

Friends and critics alike say the surge in support is largely due to the steely determination of 45-year-old Meloni, who won her first local election at 21 and became Italy's youngest ever minister when, at the age of 31, she was given the youth portfolio in Berlusconi's 2008 government.

Her ascent is especially notable considering her humble background in a country where family ties often trump merit.

She was brought up by a single mother in a working class district of the Italian capital after her father abandoned them following her birth, and has made no attempt to lose her strong Roman accent.

In her 2021 autobiography, 'I am Giorgia', Meloni says she found a new family aged 15, when she joined a local youth section of the Italian Social Movement (MSI), created in 1946 by supporters of fascist dictator Benito Mussolini.

Hard-working and feisty, she soon caught the eye of party activist Fabio Rampelli, who organized courses to train what he hoped would be a new generation of conservative politicians.

The MSI was folded into a new body called National Alliance (AN) in the mid-1990s before merging with a mainstream conservative group created by former PM Berlusconi.

In her biggest political gamble, Meloni and a contingent of AN veterans left Berlusconi in 2012 and co-founded Brothers of Italy, named after the opening lines of the national anthem.

The party maintained the old flame symbol of the original MSI group and Italian media occasionally publish photographs showing fascist memorabilia in the offices of some Brothers of Italy regional politicians.

No such relics adorn Meloni's office. Instead there are numerous angel figurines, snaps of her 5-year-old daughter, chess sets, a photograph of Pope John Paul with Mother Teresa, and pots of colored pens she uses to take meticulous notes.

She herself dismisses any suggestion her party is nostalgic for the fascist era. She distances herself from a video that emerged this month of her as a teenager speaking in French and praising Mussolini, an ally of Nazi leader Adolf Hitler in World War Two, as a "good politician". "Obviously I have a different opinion now," she said, without elaborating. 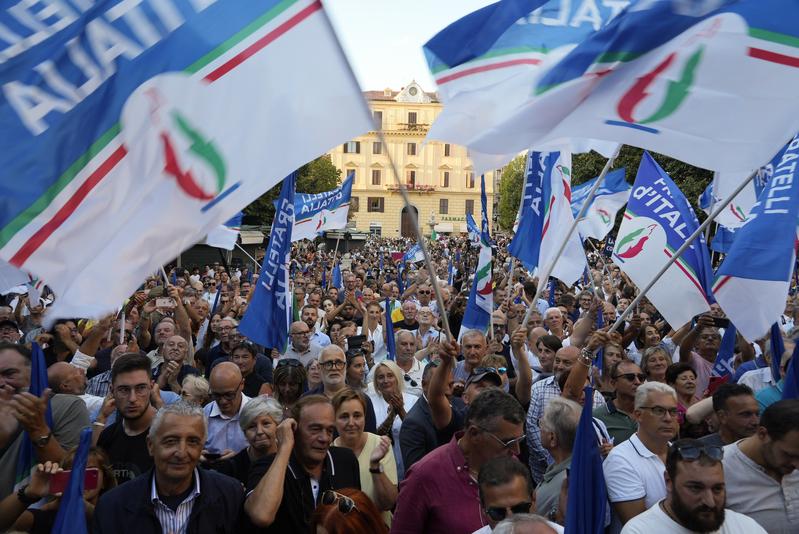 People hold flags as Brothers of Italy's leader Giorgia Meloni addresses a rally as she starts her political campaign ahead of Sept 25 general elections, in Ancona, Italy, on Aug 23, 2022. (DOMENICO STINELLIS / AP)

Meloni compares her party to the US Republican Party and Britain's Conservative Party. Patriotism and traditional family values are exulted, while political correctness and global elites are excoriated.

"Yes to natural families, no to the LGBT lobby, yes to sexual identity, no to gender ideology, yes to the culture of life, no to the abyss of death," she said in a speech in June to supporters of the Spanish rightist party Vox.

"No to the violence of Islam, yes to safer borders, no to mass immigration, yes to work for our people, no to major international finance," she continued, speaking in Spanish, her voice raising to a crescendo of anger.

Pollsters say the secret to her success is her apparent refusal to compromise and the steadfastness of her messaging.

Whereas her allies Salvini and Berlusconi joined forces with the center-left last year to form a unity government under Mario Draghi, Meloni refused, saying appointing an unelected former central banker was undemocratic.

The decision left Brothers of Italy as the sole major party in opposition, giving it a pass on having to defend unpopular decisions taken during the COVID emergency.

Meloni has been cautious ahead of the election, urging her allies not to make pledges they cannot keep and promising to be a safe pair of hands managing Italy's fragile public accounts. She has reassured Italy's establishment, touting a strong pro-West message, vowing to boost defense spending.

All the tough talking inevitably draws comparisons in the Italian press between Meloni and former British Prime Minister Margaret Thatcher.

She is opposed to diversity quotas to boost female presence in parliament or the boardroom, saying women have to get to the top through merit. However, she says that being a woman has its advantages in macho Italy. "When you are a woman you are often underestimated, but that can help you," she said.