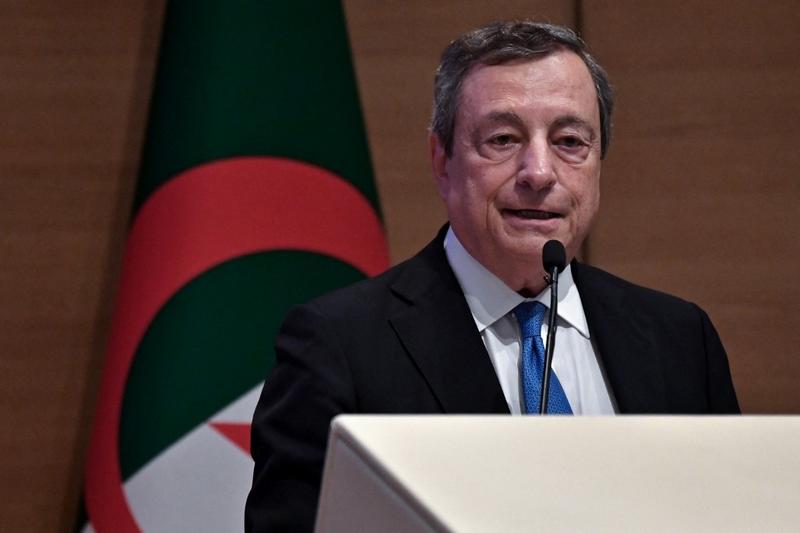 Italian Prime Minister Mario Draghi speaks during the inauguration of the Business Forum at the International Conference Center in Algiers on July 18, 2022. (AFP)

ROME – Italian Prime Minister Mario Draghi will address the upper house Senate on Wednesday on a political crisis that could bring down his government and trigger early elections at a time of international tumult and economic upset.

Senators have been summoned for 9:30 am (7:30 am GMT) and the result of a vote on the prime minister's speech was expected by 7:30 pm (5:30 pm GMT). A debate on the government's future is also expected to take place at the lower house on Thursday

Draghi tendered his resignation last week after the populist 5-Star Movement refused to back his broad coalition in a parliamentary confidence vote.

President Sergio Mattarella rejected the resignation and instead asked him to address parliament, hoping he would find a solution allowing him to stay in office until the end of the legislature in early 2023.

Senators have been summoned for 9:30 am (7:30 am GMT) and the result of a vote on the prime minister's speech was expected by 7:30 pm (5:30 pm GMT). A debate on the government's future is also expected to take place at the lower house on Thursday.

Little seems to have changed on the political front since last week, when the 5-Star boycotted the confidence vote on measures aimed at alleviating the high cost of living, complaining that its own concerns had been overlooked.

It is still unclear whether Draghi remains determined to quit at some stage in the next two days, or if he might change his mind and stay in office, as many people both inside and out Italy have urged, fearing his departure could trigger chaos.

The former European Central Bank chief has enough backing to remain in office without 5-Star, but he has so far rejected that option because his original mandate was to lead a national unity coalition with parties from across the political spectrum.

5-Star leader Giuseppe Conte said at the weekend he wanted Draghi to signal that he was ready to enact some of his policy priorities before renewing his support to the government, including introducing a minimum wage scheme.

Complicating efforts to overcome the divisions, the rightist League party and its Forza Italia allies have said they do not want to share power with 5-Star anymore.

The 5-Star has held repeated meetings in recent days to try to decide its strategy, but remains deeply divided. Two party lawmakers told Reuters that as of Tuesday evening they had not received any indication on how to vote in Wednesday's debate.

If Draghi believes his government cannot be revived, he would hand in his resignation once more to President Mattarella, almost certainly opening the way for elections in late September or early October.

Italy has not had an autumn election since World War Two as that is the period normally reserved for drawing up the budget.

Credit rating agency Fitch said on Monday that Draghi's resignation would make structural reforms and fiscal consolidation ever more challenging in Italy, which has the second highest debt-to-GDP ratio in Europe after Greece.