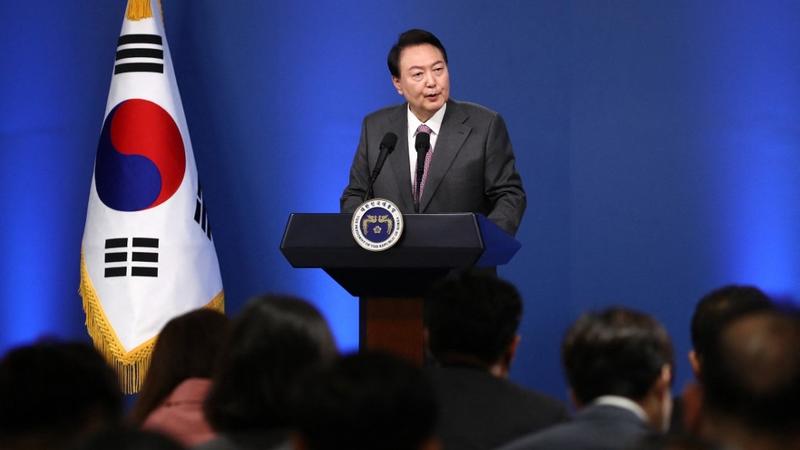 ROK President Yoon Suk-yeol delivers a speech during his news conference to mark his first 100 days in office at the presidential office in Seoul on Aug 17, 2022. (CHUNG SUNG-JUN / POOL / AFP)

Yoon gave the instructions at his first visit to a military bunker in the capital Seoul that would serve as a command post the event of a conflict.

His visit coincided with the start on Monday of military drills by the armed forces of ROK and the United States that are the largest in years.

The annual summertime exercises have been renamed Ulchi Freedom Shield and due to finish on Sept 1. They involve the first field training between the two militaries since 2017 after being scaled back amid the COVID-19 pandemic and under Yoon's predecessor who sought to improve relations with the DPRK.

Yoon highlighted that this year's drills were conducted under a changed scenario and the operational plans reflect DPRK's evolving threats.

"We need to urgently prepare measures to guarantee the lives and property of our people, including updating the operational plans against North Korea's nuclear and missile threats that are becoming a reality," Yoon told military commanders during the visit. The DPRK is also referred to as North Korea.

Yoon, who has vowed to boost drills and overall readiness against the DPRK, called for beefing up the military's independent capability to counter DPRK missiles, while reinforcing the extended US deterrence including its nuclear umbrella.

He also ordered the commanders to speed up plans to set up the so-called "Kill Chain" system, designed to launch preemptive strikes against the DPRK's missiles and possibly its senior leadership if an imminent attack is detected.