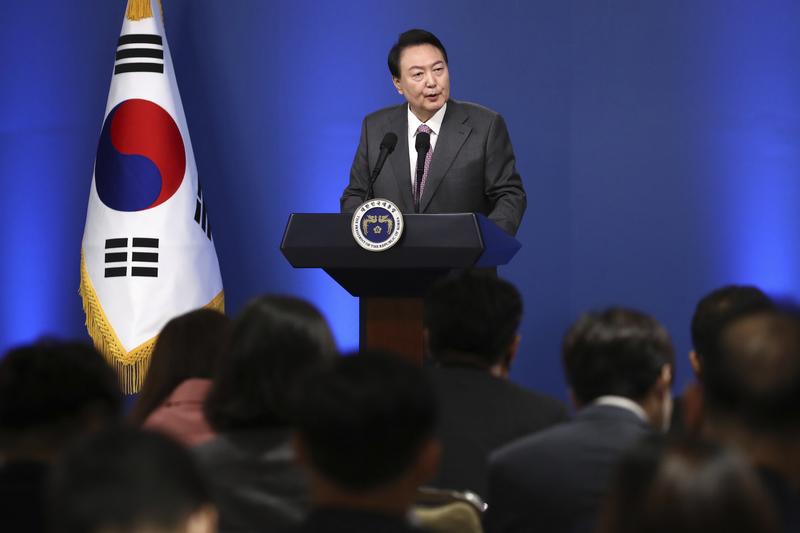 President Yoon Suk-yeol of the Republic of Korea speaks at a news conference to mark his first 100 days in office at the presidential office in Seoul, South Korea, Aug 17, 2022. (CHUNG SUNG-JUN / POOL PHOTO VIA AP)

SEOUL – Kim Yo-jong, sister of the Democratic People’s Republic of Korea's leader Kim Jong-un, said on Friday that the president of the Republic of Korea should stop “talking nonsense” after he reiterated that his country was willing to provide economic aid in return for nuclear disarmament.

Her comments mark the first time a senior DPRK official has commented directly on what ROK President Yoon Suk-yeol has called an "audacious" plan – first proposed in May and which he talked about again on Wednesday at a news conference to mark his first 100 days in office.

"It would have been more favorable for his image to shut his mouth, rather than talking nonsense as he had nothing better to say,” Kim Yo-jong said in a statement.

READ MORE: ROK's Yoon says any talks with DPRK should be more than show

According to state news agency KCNA, she called Yoon "really simple and still childish" to think that he could trade economic cooperation for the DPRK’s honour and nuclear weapons. "No one barters its destiny for corn cake.”

We make it clear that we will not sit face to face with him.

Kwon Young-se, the ROK unification minister who handles relations with the DPRK, expressed regret over Kim Yo-jong's slamming of the ROK leader and rejection of Seoul's proposal.

"I express deep regret over Kim Yo-jong's very disrespectful and indecent criticism of our president," Kwon told a parliamentary session.

While Yoon has said he is willing to provide phased economic aid to the DPRK if it ended nuclear weapons development and began denuclearisation, he has also pushed to increase the ROK’s military deterrence against the DPRK. The ROK has resumed long-suspended joint drills with the United States, including major field exercises due to begin next week.

On Wednesday, a US State Department spokesman said Washington supports Yoon's policies, but Kim said the joint drills show that the allies' talk of diplomacy is insincere.

"We make it clear that we will not sit face to face with him," she said of Yoon.

Experts say the ROK’s latest economic plan is similar to proposals by previous leaders, including those during the summits between the then-US President Donald Trump and Kim Jong-un.

"Yoon's initiative adds to a long list of failed offers involving South Korean promises to provide economic benefits to North Korea ... These were the same assumptions that were behind a succession of failed efforts to jump-start denuclearisation talks," Scott Snyder, a senior fellow at the Council on Foreign Relations think tank, said in a blog post on Thursday, referring to the DPRK as North Korea and the ROK as South Korea.