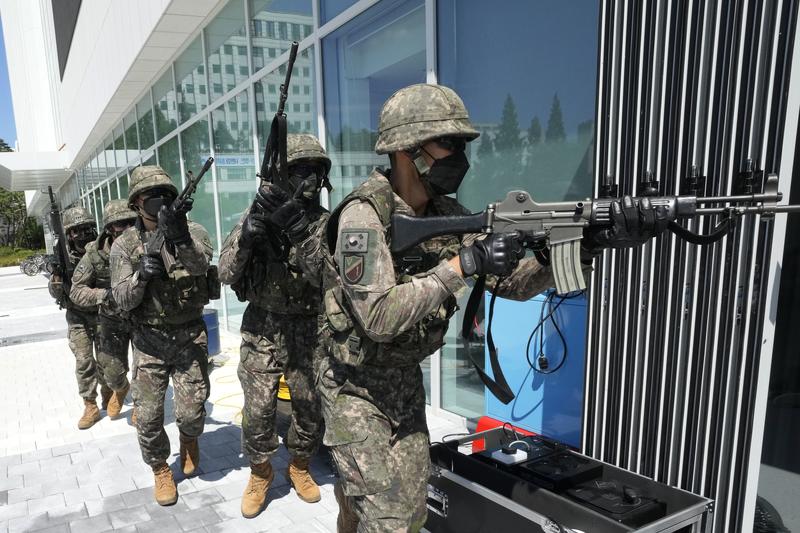 ROK's army soldiers conduct an anti-terror drill as part of the joint military exercises, the Ulchi Freedom Shield, between the US and the ROK at an art center in Bucheon on Aug 23, 2022. (AHN YOUNG-JOON / AP)

SEOUL - For the first time a Republic of Korea’s general is commanding annual joint drills with American forces, the US military said on Wednesday, a step toward Seoul's long-delayed goal of gaining command of allied forces in the event of a war.

The allies began on Monday their largest joint military drills in years, known as Ulchi Freedom Shield, with a resumption of field training, aiming to strengthen readiness for potential weapons tests by the Democratic People’s Republic of Korea.

The exercises include an 11-day "computer simulated, defense-oriented training event" to improve allied readiness, US Forces Korea (USFK) said in a statement.

The exercises include an 11-day "computer simulated, defense-oriented training event" to improve allied readiness, US Forces Korea said in a statement

The move was based on future command plans outlined by US and ROK defense secretaries last year, LaCamera said in the statement.

"This is significant because, for the first time ever, the CFC deputy commander will take the lead as the future CFC commander," he added.

Since the 1950-1953 Korean War, the American military has retained authority to control hundreds of thousands of the ROK forces alongside the roughly 28,500 US troops stationed in the country if another war breaks out.

President Yoon Suk-yeol has said the ROK is not ready to take operational control of those joint forces, after a push by his predecessor, Moon Jae-in, faced delays over the COVID-19 pandemic and other issues.

Yoon has cited a need for greater surveillance and reconnaissance capabilities, among other factors.

The ROK Defense Minister Lee Jong-sup participated in Wednesday's drills, which the ministry said aimed at better deterring and responding to the DPRK's nuclear and weapons of mass destruction (WMD) threats.

The DPRK has criticized the joint drills as a rehearsal for invasion, calling them a "hostile policy" that proves Washington and Seoul are truly not interested in diplomacy.

READ MORE: ROK's Yoon says any talks with DPRK should be more than show