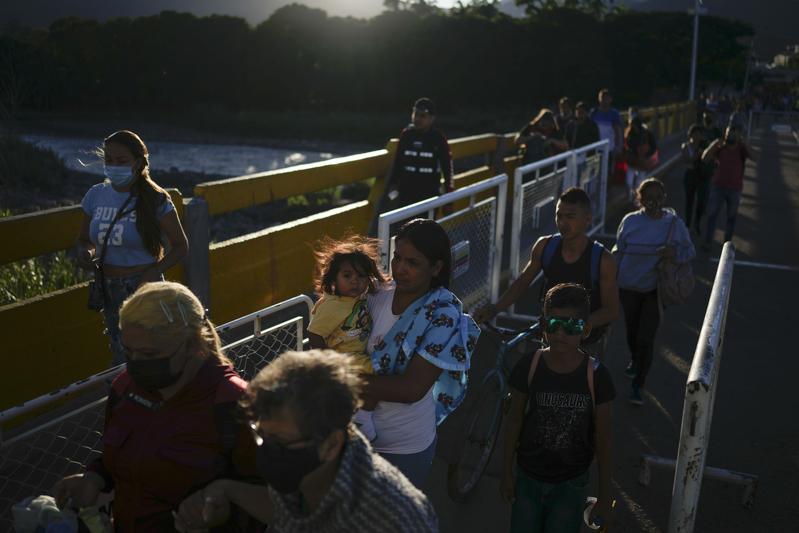 Pedestrians use the Simon Bolivar International Bridge to cross between San Antonio, Venezuela, behind, and Cucuta, Colombia at sunrise on Aug 8, 2022, along the border which Venezuela partially closed in 2015. (MATIAS DELACROIX / AP)

CUCUTA, COLOMBIA - The full reopening of the Colombia-Venezuela border will come sooner rather than later, but will depend on legal conditions and the overall re-establishment of bilateral ties, Colombia's commerce minister said on Thursday.

"The border will open soon, but at the time when we have that coordination," Commerce Minister German Umana said during a meeting in Cucuta of business people from both sides of the border, including the Colombia-Venezuelan Chamber of Commerce.

Relations between the two countries have warmed in the nearly two weeks since Gustavo Petro was sworn in as Colombia's new president. Petro has promised to reopen largely-shuttered trade across the porous 2,219-kilometer (1,380-mile) border.

Petro and Venezuelan President Nicolas Maduro have each named ambassadors to each others' countries.

The reopening will not mean a large uptick in trade in the short term but will be key to re-establishing institutional control in an area affected by illegal economies and smuggling, Colombia's Commerce Minister German Umana said

"Our business owners are looking for this not to be subject to sanctions," Umana added, without offering details.

A United Nations envoy said last year that sanctions on Venezuela put in place by the US and the EU were worsening a humanitarian crisis and recommended relaxing them, much to the chagrin of the country's opposition.

The reopening will not mean a large uptick in trade in the short term but will be key to re-establishing institutional control in an area affected by illegal economies and smuggling, Umana said.

"What will happen when we open the bridges is that we will replace illegality, money laundering, contraband," he said.

Trade between the two countries this year could total more than US$600 million, he added, after reaching US$316 million in the first half, about the same it reached during all of 2021.

Colombia's transport minister said border bridges were being assessed ahead of the reopening.

"Beyond the reopening of the border we hope to reactivate our industrial zones," said Freddy Sandoval, head of the automakers' guild in the Venezuelan state of Tachira, adding the country had the continent's most extensive auto-making infrastructure two decades ago.

"We have to recover that," he said.

Bilateral relations broke down in early 2019 after Caracas objected to members of the Venezuelan opposition, supported by the US Trump administration, trying to send aid trucks across the border from Colombia. A US audit last year found the effort was not planned in alignment with humanitarian principles.

Trade between the two countries was US$7 billion in 2008, before Venezuela's then-president Hugo Chavez froze it in protest of a military deal between Bogota and Washington.