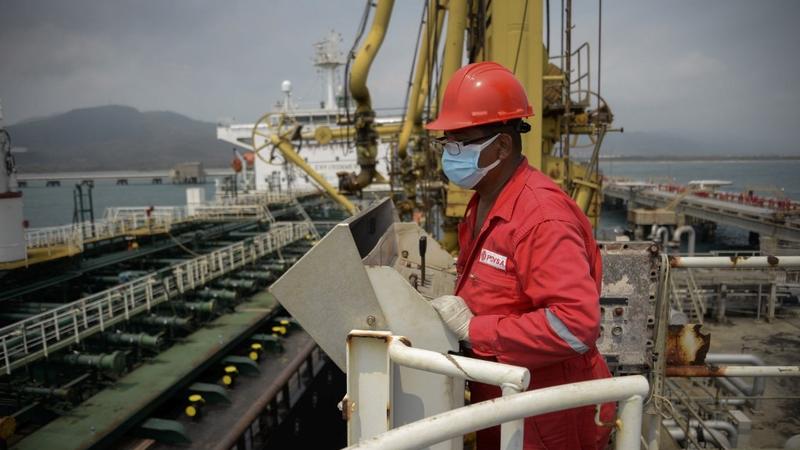 A worker of the Venezuelan state oil company PDVSA looks at the Iranian-flagged oil tanker Fortune as it docks at the El Palito refinery in Puerto Cabello in the northern state of Carabobo, Venezuela, on May 25, 2020. (PHOTO / AFP)

CARACAS - Venezuela on Tuesday confirmed a decision by the United States to ease oil sanctions, calling for a total lifting of the US sanctions on the South American country.

"The Bolivarian Government of Venezuela has verified and confirmed the news ... that the United States of America has authorized US and European oil companies to negotiate and restart operations in Venezuela," Venezuelan Vice President Delcy Rodriguez tweeted.

"Venezuela hopes that these decisions by the United States of America will pave the way to the total lifting of the illegal sanctions which affect our entire people," she said.

The Venezuelan government "will continue to tirelessly promote a fruitful dialogue at the national and international level," Rodriguez added.

In 2019, former US President Donald Trump broke off relations with Venezuela, refusing to recognize Nicolas Maduro as the Venezuelan president, and announced a series of sanctions on the country's oil, finance and trade sectors.

Part of the sanctions relief involved the issuance by the US Treasury Department of a "narrow license" authorizing Chevron Corp, the last major US oil company still operating in Venezuela, to negotiate "potential future activities" in the Latin American country, the officials told reporters during a briefing, speaking on the condition of anonymity under ground rules set by the White House.

Oil prices fell on Tuesday after news of the US easing oil sanctions against Venezuela spread.

The news came at a time when market participants were worried about tight supplies as the European Union worked on gaining support for an oil embargo against Russia.