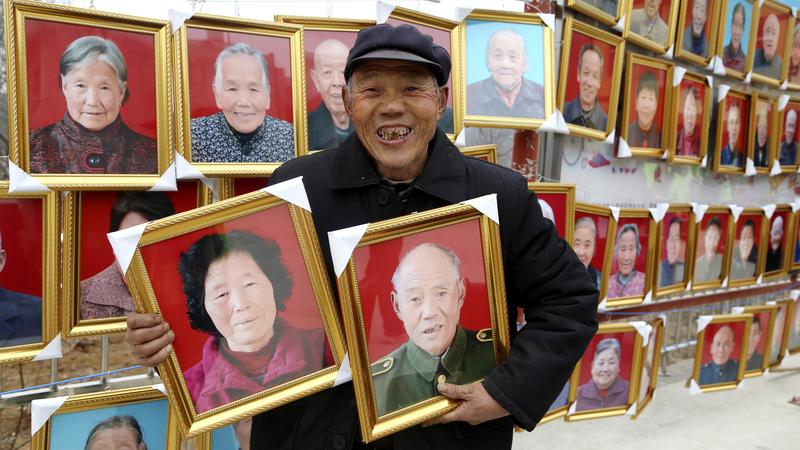 Charity work exposes newspaper photographer Yang Xin to the lack of decent photos facing many elderly people in rural areas of Shangluo, and prompts her to launch a program to take gratuitous portraits of them. (YANG XIN / FOR CHINA DAILY)

When Yang Xin visits a village, seniors make it a point to dress up, as the 37-year-old woman sets up a red-cloth background to photograph them.

Before they appear for the shoot, Yang's team members groom them one by one, brushing dirts off their clothes and combing their hair. For those with long hair, Yang and her team members make plaits or buns.

They are unperturbed by death, which positively moves and influences us, prompting us to carry on. We can be like light, bringing a bit of warmth to others.

"We want to ensure that they look their best and no hair is out of place," says Yang, who also works as a photographer for Shangluo Ribao, a local daily newspaper in Shangluo city, Shaanxi province.

As she raises her camera, the villagers often smile from ear to ear. Yang wastes no time in capturing their earthy and cheerful looks in a frame. Most village residents have never had a photo of themselves properly, except for headshots for identity cards, not to mention going through all the pre-shooting preparations that are normally only provided by professional photographers.

The portrait photos Yang has taken have managed to retain the image of elderly villagers, including some who have died. In such cases, the photos are used to remember them. That was a reason Yang initiated the free photography drive for elderly villagers.

A visit to a villager's home during a public welfare program in 2017 made Yang aware of the "photo problem". She was working with the China Social Assistance Foundation to deliver free clothes to people above 60 in rural areas of Majie town, Shangluo.

"We went back to see an elderly woman surnamed Shao to review the influence of the program," Yang says, adding that they found out the woman had put away the donated clothes in her cabinet to use them only for major events and holidays.

Charity work exposes newspaper photographer Yang Xin to the lack of decent photos facing many elderly people in rural areas of Shangluo, and prompts her to launch a program to take gratuitous portraits of them. (YANG XIN / FOR CHINA DAILY)

When Shao was fumbling around for the right key to the cabinet, Yang noticed that sitting right next to it was a roof tile with a white paper stuck on it.

"It was supposed to be a memorial tablet for her husband, who had passed away without leaving any portrait photos of himself behind," Yang says.

"I could feel she was regretful about it."

As Yang continued to visit more elderly people in villages, she found that a considerable number hadn't taken any pictures for the better parts of their lives, except for headshots. Some people either used obsolete mobile phones or didn't own a camera or telephone.

"They also didn't feel like going to the town to get portrait photos taken," Yang says, adding that, despite such issues, they wanted to have a decent photo of themselves. 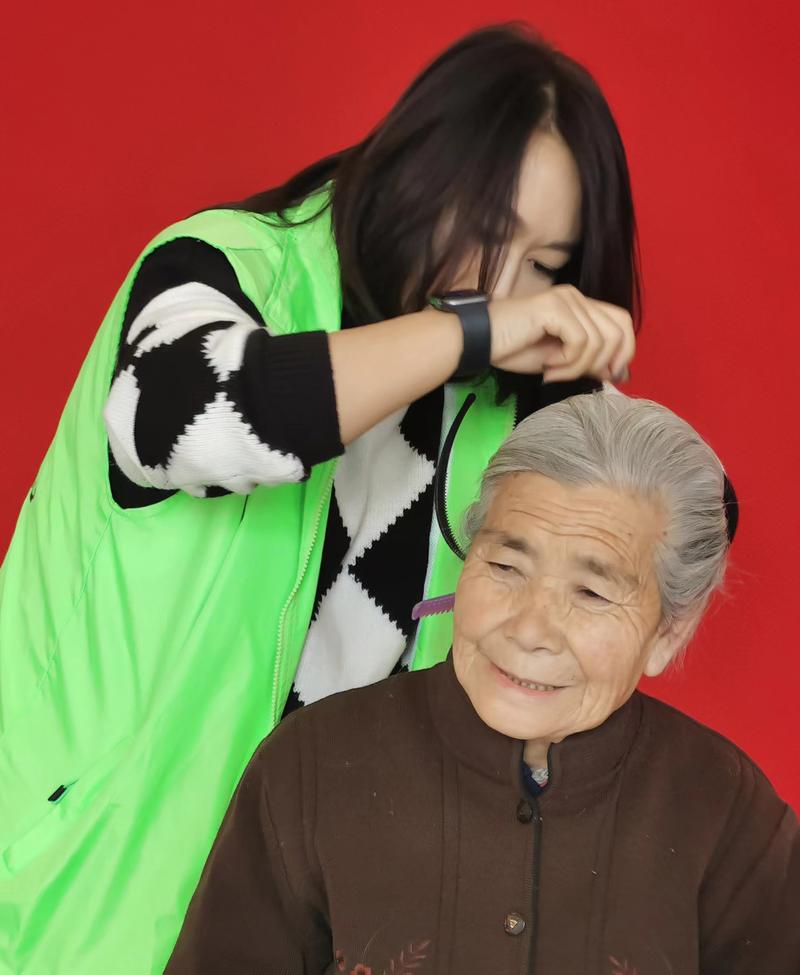 Yang put together a team in 2018 to take photos of senior rural residents. Her efforts received support from the China Welfare Lottery. She says the first time she and the team went to a village, three other welfare institutions were offering art performances and training there.

"We were worried about the turnout," Yang says, adding that the purpose of her program wasn't that pleasing at first, yet elderly villagers lined up after hearing about it. More came later through word of mouth. Volunteers from the three other organizations also helped Yang.

"We ended up taking photos from 9 am to 1 pm," Yang recalls.

Yang has taken photos of more than 2,000 elderly villagers.

"As long as we have the opportunity, we will carry on," Yang says, adding that the number of elderly rural residents in that area of Shaanxi isn't small. 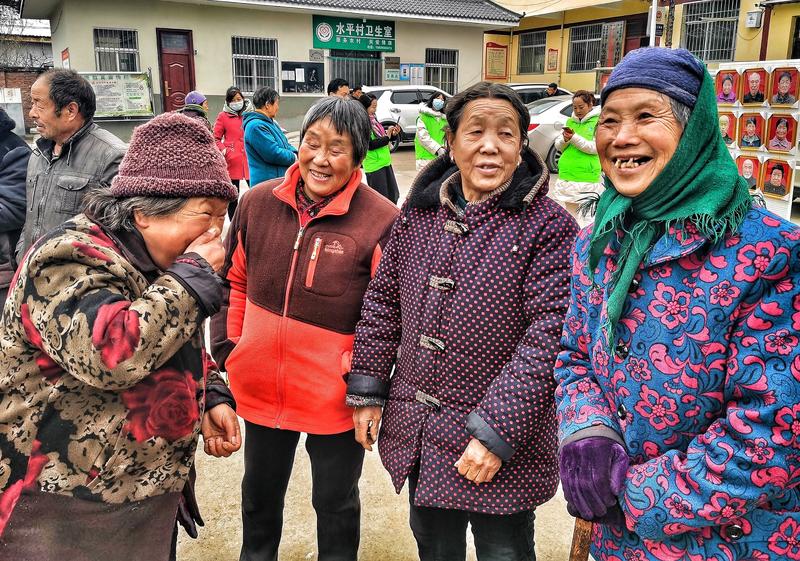 Yang had left her blood sample in a clinic in 2006 when she was still in college in the provincial capital Xi'an. Eight years later, a match was found for a leukemia patient.

"I realized it was a life-or-death situation, and there was probably no chance for the patient to find a second match," she says.

After consulting her father and sister-in-law who are both doctors, Yang donated stem cells to the patient. The experience made Yang think of doing more for others.

As a press photographer, Yang often goes to the countryside and has seen the hard life of many elderly people in Shangluo.

"Many local young people have been working away from homes to bring in better income," Yang says.

The downside is that the elderly are often left behind, minding their shops. Those in their 60s can often be seen ploughing away in the fields, where children help with digging potatoes, breaking corn cobs or collecting wheat, she adds. That was why she decided to launch the free photo drive.

Yang and her team usually go to a village three times. The first time they get a general idea of the number of elderly people in need of a portrait photo, so they can prepare accordingly. Then they visit again to take the pictures. 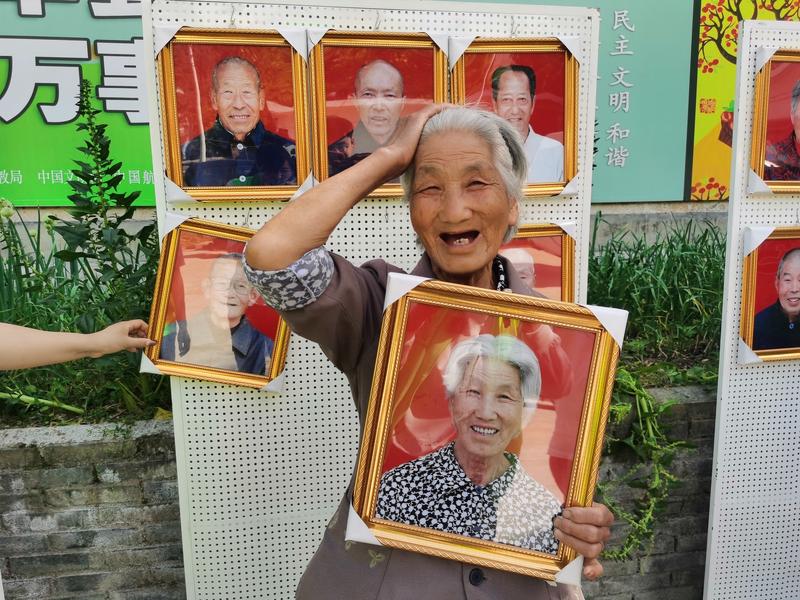 Yang puts a lot of consideration into developing the films. She settled on the photo size of 30 centimeters, after considering the space of rural houses and the way their offspring might carry the photo in future funerals, as the ritual goes.

For the last visit, Yang and her team hang all the laminated or framed photos as if staging an exhibition in the village, so the elderly could see their own portraits. It is also the moment when Yang feels "rewarded". Some people hold her hands or insist on having her and her team members over for meals at home, while some others compare them to their own children in terms of the arrangement they make for taking photos.

Zhao Dan joined Yang's program in 2018. She helps with the elderly's looks and postures before the photo session.

"Yang is very optimistic, even in the face of setbacks," Zhao says. "Her positive energy has helped me to tide over difficulties in life."

Zhao has also taken her son to Yang's program, which she says has exerted a positive influence in his life. During Yang's interactions with the elderly, she herself has often been moved by their down-to-earth spirit.

"They are unperturbed by death, which positively moves and influences us, prompting us to carry on," Yang says.

"We can be like light, bringing a bit of warmth to others," she adds.