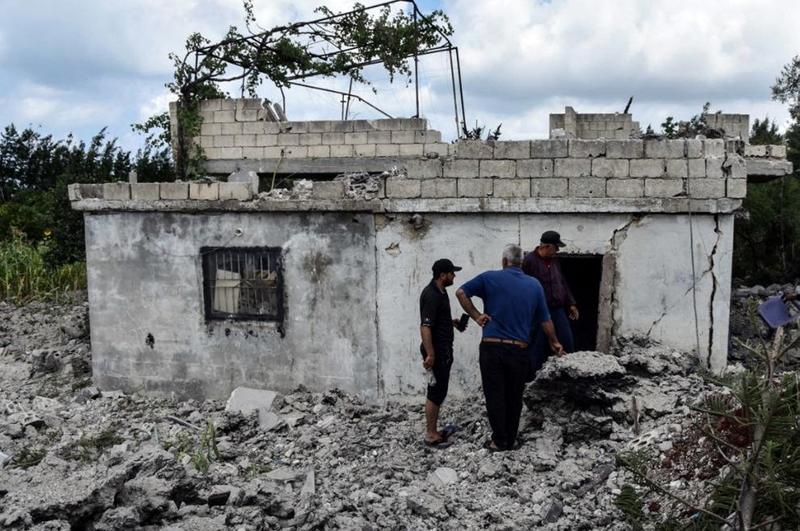 A handout picture released by the official Syrian Arab News Agency (SANA) on July 2, 2022, shows men assessing the damage caused to a building by a reported Israeli air strike in the western Syrian coastal city of Tartus. (HO / SANA / AFP)

The Syrian army earlier said three servicemen were killed and three were wounded in two simultaneous Israeli attacks south of the province of Tartous, and another on the capital of Damascus. It gave no details of the specific locations.

A Syrian army officer in the Tartous coastal region told Reuters on condition of anonymity an Iranian base near the village of Abu Afsa, south of the port city was targeted alongside an air defense and radar station nearby.

The latest strikes are part of an escalation of what has been a low-intensity conflict whose goal was to slow down Iran's growing entrenchment in Syria, Israeli and regional military experts say

Israel has staged hundreds of strikes against alleged Iranian targets in recent years, but has mostly avoided hitting the coastal provinces where Russia's main military assets are concentrated.

The latest strikes are part of an escalation of what has been a low-intensity conflict whose goal was to slow down Iran's growing entrenchment in Syria, Israeli and regional military experts say.

The strikes were close to the Russian navy's only Mediterranean base in the port of Tartous where Russian warships are docked, while Moscow's major Hmeimim air base is also in nearby Latakia province.

Russia's intervention alongside Iran helped turn the tide in favor of Assad in an over decade old conflict.

But tensions have mounted between Israel and Russia over the former's condemnation of the Ukraine conflict and the latter's scrutiny of a Jewish emigration agency.

Israel last month said its military jets came under Russian anti-aircraft fire over Syria in May but they missed their target, describing the confrontation as a "one-off incident".

Syria blamed Israel for major strikes on its main international airport in Damascus last June that heavily damaged runways and forced a halt for several weeks to flights.

Israeli defense officials say the civilian airport has been used regularly by Iran to transport weapons and militias.