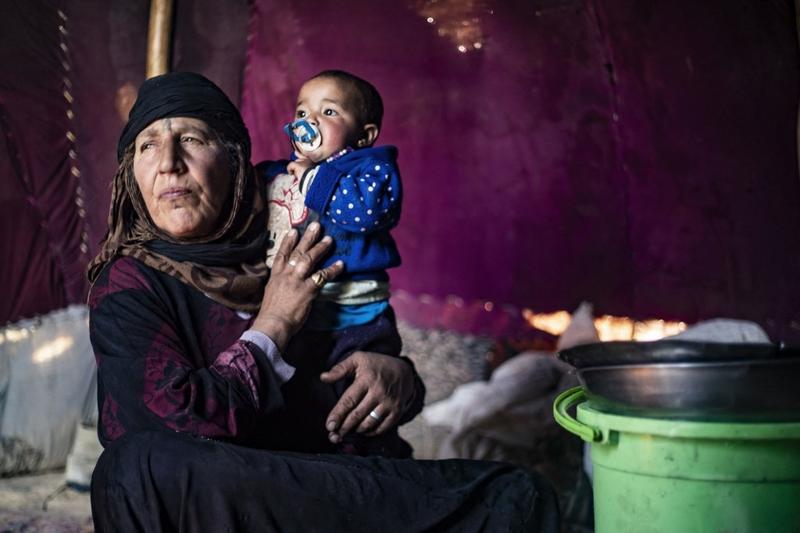 A Syrian woman holds a child at the Kabsh camp for the displaced people in the countryside near Syria's northern city of Raqa during the Muslim holy month of Ramadan on April 7, 2022. (DELIL SOULEIMAN / AFP)

People in the capital heard powerful explosions as a result of the attack and the interception of the Syrian air defenses.

The state media has not given more details, but the opposition Syrian Observatory for Human Rights said that over 12 violent explosions were heard in the capital Damascus and its countryside as a result of the Israeli strikes.

As the eyes of the world turn to other conflicts, Syria is on the verge of becoming a forgotten crisis. Yet millions of Syrians struggle each month to survive, said Joyce Msuya, the deputy UN relief chief

It added that the Israeli missiles landed near the international airport of Damascus and areas in the northern countryside of Damascus.

The attack is the latest in a string of Israeli strikes against Syrian military sites over the pretext that it's targeting pro-Iran militias and weapons shipments.

On Tuesday, Joyce Msuya, the deputy UN relief chief, told the Security Council that the humanitarian situation in Syria remains dire amid a worsening economic crisis.

As the eyes of the world turn to other conflicts, Syria is on the verge of becoming a forgotten crisis. Yet millions of Syrians struggle each month to survive. For many, their situation has never been direr since the civil war erupted in 2011, she said.

Fighting in many areas continues, and civilians, including women and children, are being killed and injured. The economic crisis continues unabated, she added.

Fuel shortages and lack of electricity impact the delivery of basic services, including health, education, and water and sanitation. Food and fuel prices are spiraling higher every month, putting the basic necessities for a healthy and dignified life even further out of reach for millions of people. Food prices rose another 18 percent between February and March, said Msuya, assistant secretary-general for humanitarian affairs and deputy emergency relief coordinator.

Reliable access to sufficient and safe water across the north remains a major challenge. Unprecedented water shortages last year are already taking their toll on farmers and livestock producers.

Some sub-districts in the northeast of the country are reporting harvest losses of over 75 percent. The loss of crops and of agricultural livelihoods will likely worsen already high rates of food insecurity and malnutrition. Women and girls are disproportionately affected due to their prominent role in agriculture, she said.

A staggering 4.1 million people in the northwest need humanitarian aid. Almost 1 million people are living in tents, half of which are beyond their normal lifespan. Most are women and children, she said.

"For Syrians living through the 12th year of this crisis, the future looks bleak. As the economic and food security outlook worsens, the resources available for our emergency response are dwindling. We simply do not have the money needed," said Msuya.

"Rapid and substantial investments are now required to help us break the vicious cycle of suffering, violence and despair. We count on the generous support of donors and the cooperation of Syrian authorities," she said.