UN troop rotations in Mali to resume on Monday 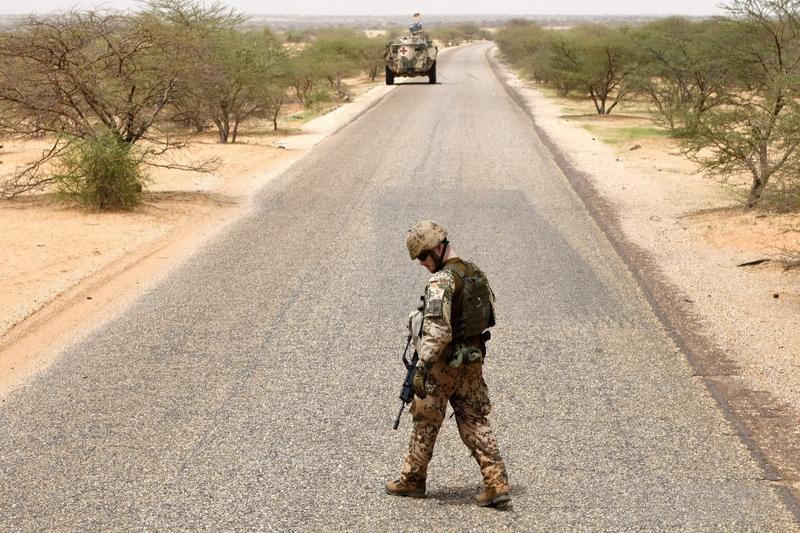 This file photo taken on Aug 2, 2018 shows a German soldier from the parachutists detachment of the MINUSMA (United Nations Multidimensional Integrated Stabilization Mission in Mali) searching for IED (improvised explosive device) during a patrol on the route from Gao to Gossi, Mali. (SEYLLOU / AFP)

DAKAR - Troop rotations by the UN peacekeeping mission in Mali will resume on Monday, a mission spokesperson said on Saturday, one month after Malian authorities suspended them and accused foreign soldiers of entering the country without permission.

Mali's ruling junta suspended troop rotations for the nearly 12,000-strong mission on July 14 after arresting 49 soldiers from Cote d'Ivoire who it said had arrived in the country without permission. Cote d'Ivoire denied this.

It said they would resume following discussions with representatives from the mission, known as MINUSMA, about how to coordinate troop deployments.

Mali's military junta said they would resume following discussions with representatives from the mission, known as MINUSMA, about how to coordinate troop deployments

The July arrests highlighted friction between the junta, which seized power in an August 2020 coup, and international partners, who have criticized election delays and security cooperation with Russian mercenaries.

Ivory Coast says the soldiers were deployed as part of a support contract signed with MINUSMA, which was created in 2013 to provide security from Islamist miltants. The Ivorian troops remain in detention.

A MINUSMA spokesperson said the mission and Malian authorities had agreed on a streamlined rotation procedure and that the mission's request to resume rotations on Monday had been accepted.

Mali's foreign ministry could not be immediately reached for comment.

Relations between Mali and troop-contributing countries remain strained. On Friday, Germany said it was suspending its military reconnaissance mission, which provides intelligence to MINUSMA, after Malian authorities withheld a flight clearance.

Mali's foreign minister denied on Twitter that the government had done so and called on Germany to adhere to the new mechanism for approving troop rotations.