Land of the 'giants'

Findings unearthed in a village in Shandong province offer archaeologists intriguing insights into a key prehistoric culture along the lower reaches of the Yellow River, reports Zhao Ruixue in Jinan. 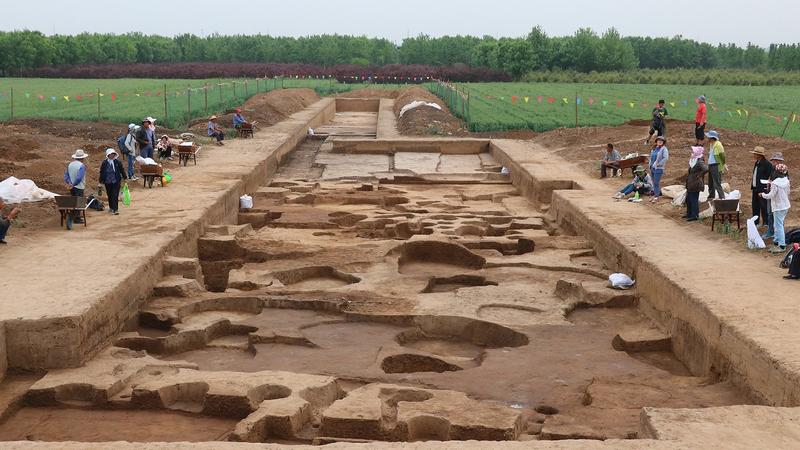 The excavation scene of the Jiaojia site. (PHOTO PROVIDED TO CHINA DAILY)

Editor's note: A national comprehensive research program, launched in 2002, to trace the origins of Chinese civilization, has led to the excavations and studies of key sites that are about 3,500 to 5,500 years old. It has revealed a host of secrets about ancient China, including how early civilizations were formed and how they merged to create unity in diversity. China Daily speaks to experts working at these sites to decode their recent discoveries.

At a cursory glance, it is just a large expanse of cultivated land in Zhangqiu district of Jinan, East China's Shandong province, where wheat has been harvested in late June. But look carefully and you stumble upon a 5,000-year-old Neolithic settlement, which is a trove of fascinating finds, including a graveyard of giant humans, priceless jade and ceramic artifacts.

The site is very significant in studying the origin and development of civilizations in the lower reaches of the Yellow River.

Tang Zhongming, dean of the archaeology and museology department at the School of History and Culture, Shandong University

Tucked away in the plains north of Taishan Mountain, the farmland in Jiaojia village, nurtured by the Juye River, entered the annals of archaeology after a team from Shandong University discovered that it was the birthplace of a very early civilization adhering to the Dawenkou Culture (4100-2600 BC).

"The site is very significant in studying the origin and development of civilizations in the lower reaches of the Yellow River," says Tang Zhongming, dean of the archaeology and museology department at the School of History and Culture, Shandong University.

"Age determination methods, including carbon-14 dating, conducted on bone remains and analysis of the distribution of burial sites indicate the site is no less than 5,000 years old," confirms Tang, a member of the excavation team.

The Jiaojia site was discovered in 1987 and was put under protection in 1992. Students and teachers of the department dug across 2,170-plus square meters in 2016 and 2017, unearthing rammed earth walls, a trench surrounding the walls, 116 house ruins, 215 tombs, a pottery kiln and 974 ash pits. 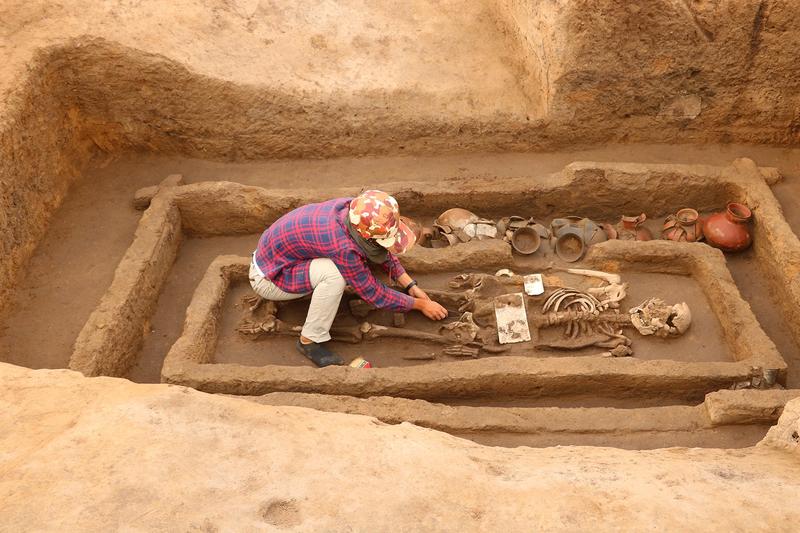 "The archaeological findings, especially the remains of the walls, trench and pottery kiln, indicate that the site was an important political, economic and cultural center in the northern parts of Shandong during the middle and late phases of the Dawenkou Culture," says Tang. "Some burial sites breach the walls, suggesting that the rammed earth boundary was built no later than the late phase."

Excavation work is still in progress to learn more about the settlement. Wu Hao, a teacher of the archaeology and museology department, along with his students, unearthed a skeleton from three meters below as recently as June 24. 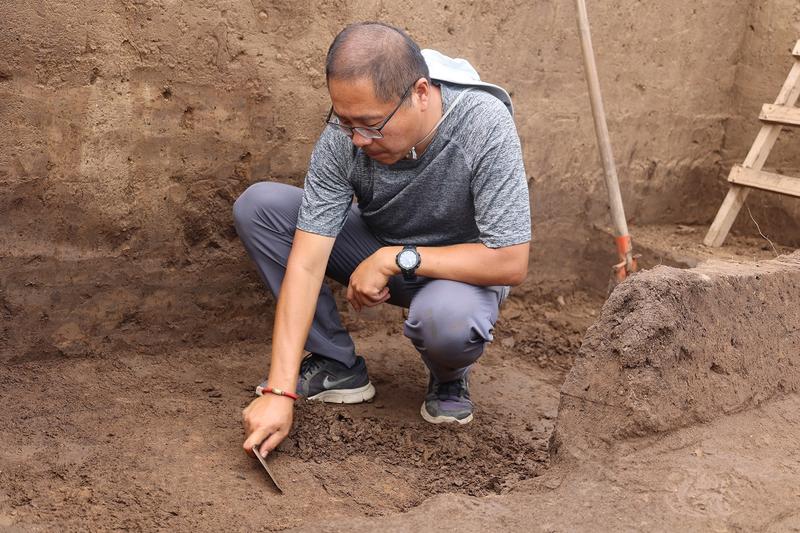 Tang Zhongming, a member of the excavation team of the Jiaojia site, scrapes off the mud at the site. (PHOTO PROVIDED TO CHINA DAILY)

Wu used a small brush to clear the layer of soil that covered the human remains. Once the head and torso were exposed, he found a round jade artifact on the right shoulder, indicating that the grave belonged to someone wealthy.

"The most difficult part of our work is to size up the area of the remains by scraping off the mud over and over again, and analyzing the soil by virtue of its content and color," he says.

Lines of different lengths are drawn at the site to demarcate areas where there may be more remains. Some of these lines cross or overlap with each other. "It is often like a sandwich, with the ruins of a house lying between two burial sites," says Tang. It suggests the settlers kept moving for a better life, he adds. 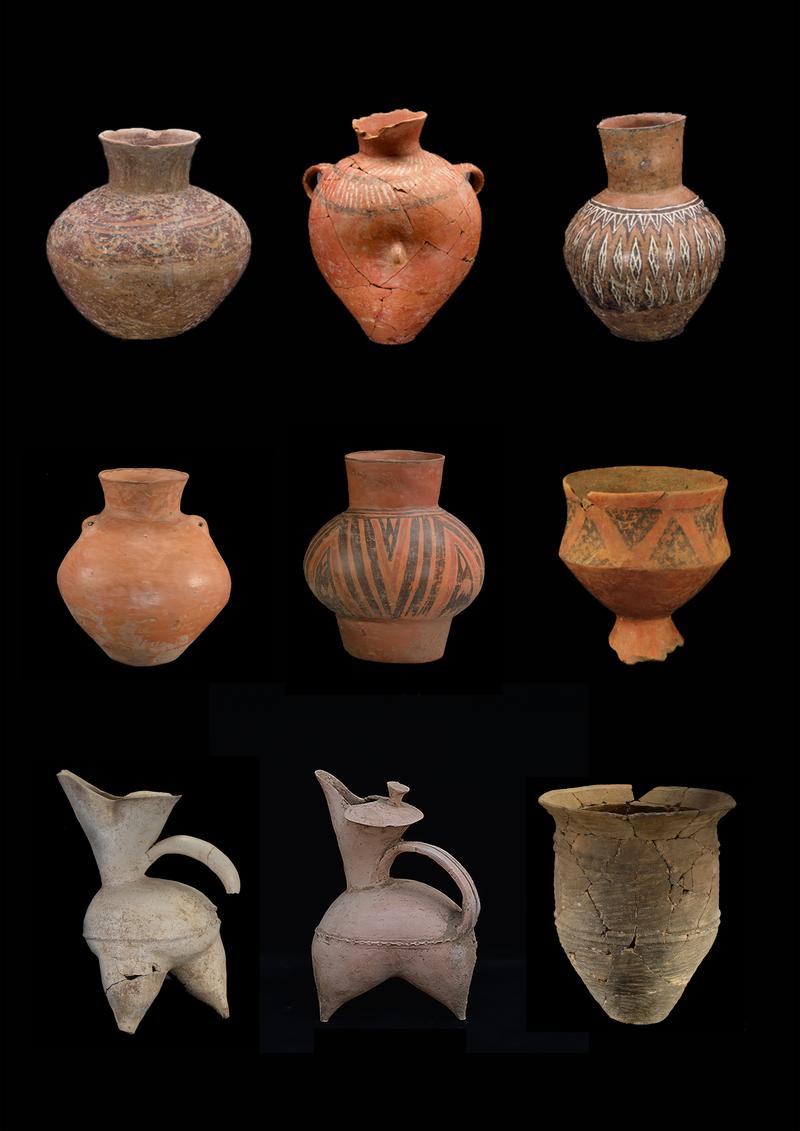 For instance, five kilometers from Jiaojia, archaeologists found the Chengziya site that represents Longshan Culture, a late Neolithic civilization in the middle and lower reaches of the Yellow River, dating back more than 4,000 years.

One of the most stunning discoveries was a graveyard at Jiaojia of men who were over 1.8 meters tall or even taller. It might not be anything to write home about today, but these men would have been exceptionally tall for the period in which they lived. Experts have theorized that access to good food owing to high social status might have triggered such remarkable growth.

The tombs were clearly differentiated by social hierarchy. The large tombs have a single coffin encased in outer coffins, or with one outer coffin. Burial goods include jade ornaments and ceramic utensils. Medium tombs, which are larger in number, have single inner coffins and mostly ceramic items.

"The size and structure of the coffins, and the type and number of burial goods give us a fair idea about the status of their owners," says Tang. One tomb garnered particular interest because its owner had a jade axe hanging from his waist. There was a cinnabar piece on the axe handle and a jade ornament at the end of it. "A jade axe is indicative of high status," Tang adds. 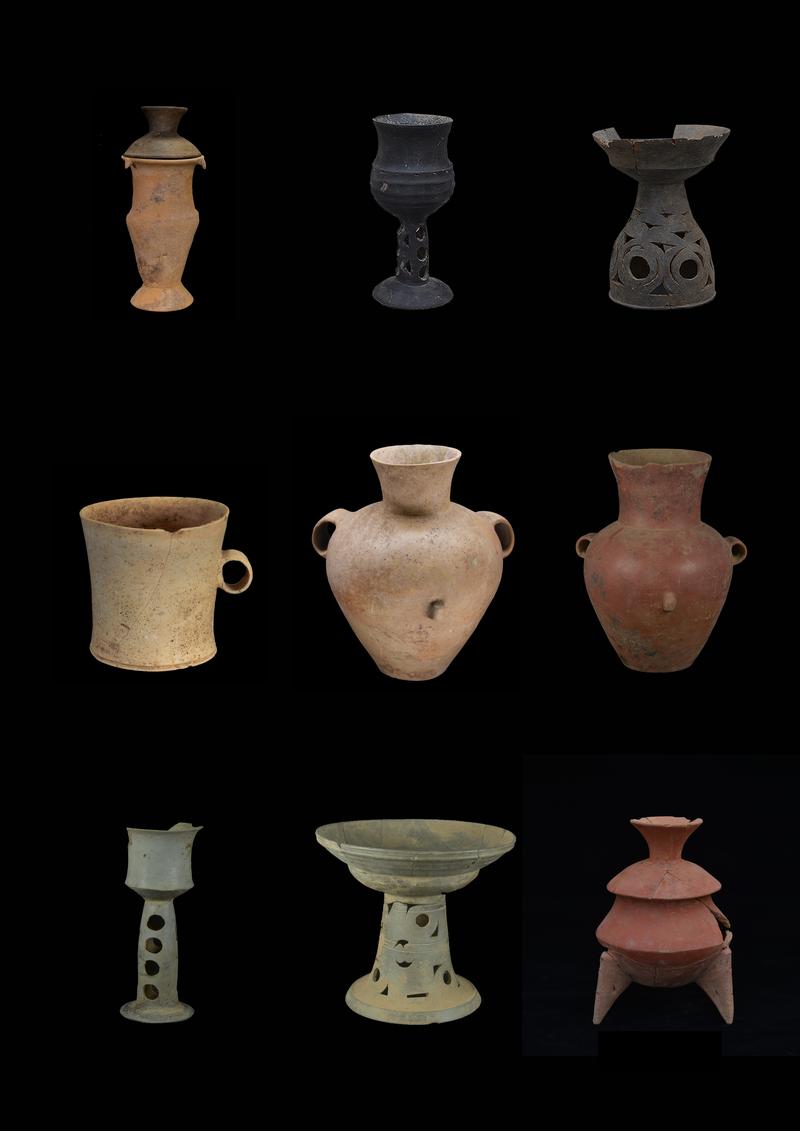 The plethora of jade artifacts found at the Jiaojia site, including bracelets, rings, string ornaments and earrings, suggests it was a key jade utilization hub in the Yellow River basin. Colorful pottery items, which have also been found in large numbers, are clear evidence of skill and aesthetic sense of these settlers.

"There must have been people making pottery, people digging trenches, supervisors, managing workers and so on. In other words, there was a pronounced social ranking system in the middle and late phases of the Dawenkou Culture period," says Tang.

The discovery of roe deer teeth in the hands of the dead, shells and painted pottery as burial goods has, on the other hand, significantly enriched the understanding of funeral customs during the time. To further understand the distribution and development of the settlement at Jiaojia, archaeologists will expand their ambit of excavation this year, adds Tang.