Japan urged to stop echoing US negative words on Taiwan 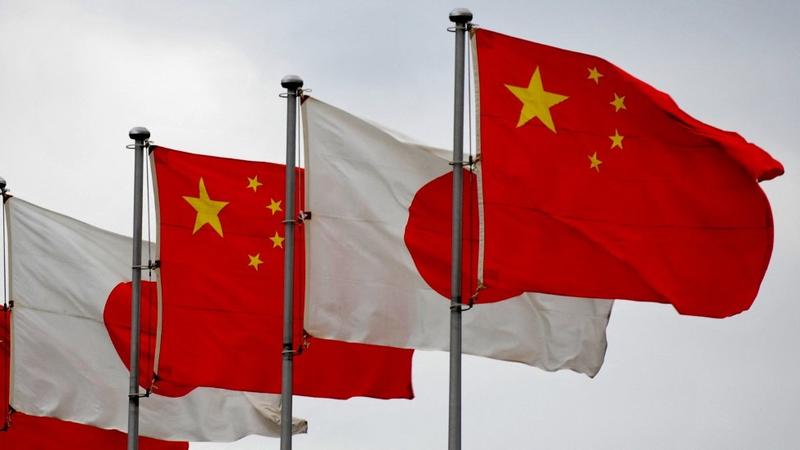 The national flags of China and Japan are displayed at Tokyo's Haneda Airport on May 30, 2010. (KAZUHIRO NOGI / AFP)

TOKYO - Chinese Ambassador to Japan Kong Xuanyou on Thursday stated China's solemn position to Japanese Vice-Foreign Minister Takeo Mori on Speaker of the US House of Representatives Nancy Pelosi's visit to China's Taiwan region, and lodged solemn representations to the Japanese side over the negative Taiwan-related statement issued by the G7 foreign ministers.

Kong said that China has repeatedly stated its solemn position on Pelosi's visit to Taiwan. Japan insists on cooperating with the United States and other G7 countries in issuing the so-called foreign ministers' statement concerning Taiwan, grossly interfering in China's internal affairs, seriously violating the basic norms governing international relations, deliberately confusing right and wrong, and trying to gang up to contain China, adding that China firmly opposes and strongly condemns such behavior.

The Taiwan question is China's internal affair, which brooks no external interference, he said, noting the one-China principle is a widely recognized norm governing international relations and tolerates no provocation.

The complete reunification of China is the common aspiration of all Chinese and an unstoppable historical trend, Kong said, adding that no country, no force, and no individual should ever underestimate the firm resolve, iron will, and strong capability of the Chinese government and people to defend national sovereignty and territorial integrity, as well as achieve national reunification and rejuvenation.

Kong pointed out that the ins and outs of the current tension over the Taiwan Straits are crystal clear, so are the rights and wrongs.

The United States insisted on arranging Pelosi's visit to Taiwan, deliberately provoking China and playing with fire, seriously violating the one-China principle and the stipulations of the three China-US joint communiques, gravely infringing upon China's sovereignty and territorial integrity, severely undermining peace and stability across the Taiwan Straits, and sending a wrong signal to the "Taiwan independence" separatist forces, he said.

China will not sit idly by, Kong said, noting it is completely justified and reasonable for China to take resolute measures to safeguard its territorial integrity and core interests. Such measures are a warning to provocateurs and a safeguard for regional stability and peace across the Taiwan Straits.

Meanwhile, the United States has continuously distorted and hollowed out the one-China principle, supported and condoned the "Taiwan independence" separatist forces, pressed China's red line and bottom line step by step, attempted to play the "Taiwan card" to contain China and hold back China's development, manipulated geopolitical games and provoked confrontation and division, revealing the fact that the United States is the biggest destroyer of peace across the Taiwan Straits, he continued.

Kong stressed that the Taiwan question concerns the political foundation of China-Japan relations and the basic trust between the two countries.

China urges the Japanese side to recognize the high sensitivity of the Taiwan question, abide by the spirit of the four political documents between China and Japan and the commitments it has made so far, he said.

Kong said Japan should take China's major concerns seriously, stop echoing the negative words and deeds of the United States concerning Taiwan, and stop following the US wrong strategy of using the Taiwan question to contain China so as to avoid bringing serious disruption to bilateral relations.