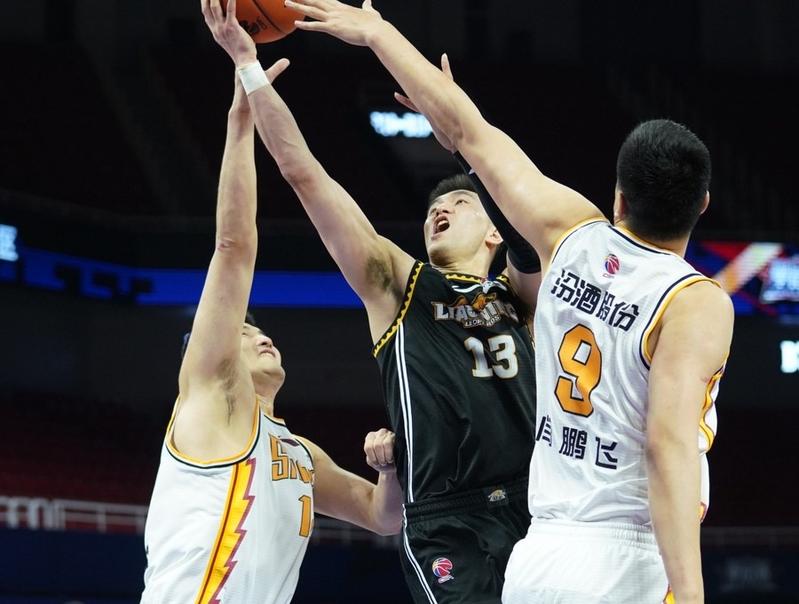 Guo Ailun (center) of Liaoning Flying Leopards goes for the basket during the 2nd round playoff match against Shanxi Loongs at the 2021-2022 season of the Chinese Basketball Association (CBA) league in Nanchang, east China's Jiangxi province, April 9, 2022. (HU CHENHUAN/XINHUA)

SHENYANG - Chinese Basketball Association (CBA) champions the Liaoning Flying Leopards said here on Friday that the club will stick to its contract extension priority rights with Guo Ailun in the CBA, unless he goes to play in the NBA or Euroleague.

Guo Ailun is in Europe now on a training tour with the Chinese national team after he missed the Asian Cup last month, where China lost to Lebanon in the quarterfinals

This is the first official response from the 2021-2022 season CBA champions after the All-Star point guard Guo, averaging 21.5 points, 6.5 assists and 3.7 rebounds last season, informed the club that he intended to leave.

"We'll try our best to keep Guo Ailun, and we are capable of providing the best platform for him within the CBA," the club told Xinhua.

"Guo is promoted from our own youth system. Winning two CBA titles in his 12 years in Liaoning jersey, he has already become a symbol of this team. We hope he can stay with us and fight for the next championship."

Liaoning also emphasized that the club will only give up its contract extension priority rights with Guo if he get an offer from NBA or Euroleague.

"As he said, he wants to step out of the comfort zone and challenge himself, enhancing his skills and form to get better prepared for the FIBA World Cup.

"We believe the NBA and Euroleague can offer Guo better chances for development, which will benefit the Chinese national team. To this aim, we will give him full support despite the loss of our club's interest."

At the end of the Liaoning's response, the club said it will always welcome Guo whenever he wants to play for his "mother side."

Guo is in Europe now on a training tour with the Chinese national team after he missed the Asian Cup last month, where China lost to Lebanon in the quarterfinals.

The 2023 FIBA World Cup serves as the qualifying tournament for Paris 2024. China finished the first round of World Cup Asian qualifiers with a win-loss record of 4-2.