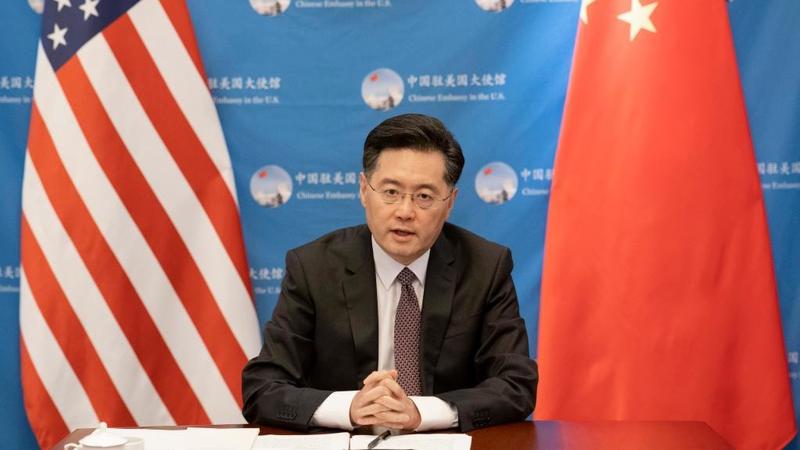 Chinese Ambassador to the United States Qin Gang speaks during a virtual meeting with board members of the US-China Business Council (USCBC) in Washington D.C. on Sept 13, 2021. (LIU JIE / XINHUA)

Ambassador Qin stressed, the military countermeasures taken by the Chinese People's Liberation Army in the waters around the Taiwan Island are necessary and legitimate measures to deter 'Taiwan independence' separatist forces, and safeguard national sovereignty and territorial integrity.

During the meeting, Qin sternly rejected the unreasonable accusations of the US side, a Chinese embassy spokesman said in a statement.

Disregarding China's staunch opposition and repeated warnings, Pelosi visited the Taiwan region Tuesday night, a move that the Chinese Foreign Ministry said was "definitely not a defense and maintenance of democracy, but a provocation and violation of China's sovereignty and territorial integrity".

"This has seriously undermined peace and stability across the Taiwan Straits and China-US relations," the spokesperson said. "The cause, consequences and merits of the incident are crystal clear. The US side must bear full responsibility for the current situation."

The Chinese military on Thursday conducted joint combat exercises and training around the Taiwan island on an "unprecedented scale", firing new models of rockets that hit targets with precision in the eastern part of the Taiwan Straits, according to Chinese media reports.

"Ambassador Qin stressed, the military countermeasures taken by the Chinese People's Liberation Army in the waters around the Taiwan Island are necessary and legitimate measures to deter 'Taiwan independence' separatist forces, and safeguard national sovereignty and territorial integrity," the spokesperson said in the statement.

With prior warnings made about them, the Chinese side matches its words with actions, it added.

The spokesperson noted that more than 160 countries and international organizations, including ASEAN countries and other regional countries, have criticized Pelosi's visit, and reiterated their commitment to the one-China principle.

The US accusation that China is escalating the tension is completely groundless and false. Facts have proved that the US is the troublemaker for peace and stability of the Taiwan Straits and the region, the spokesperson said.

Qin urged the United States to "earnestly" honor its commitment of abiding by the one-China policy and not supporting "Taiwan independence", and act immediately to rectify its mistakes and eliminate the grave impact of Pelosi's visit, according to the spokesperson.

It shouldn't take escalatory actions to further heighten the tension in the Taiwan Straits and China-US relations, the ambassador added.