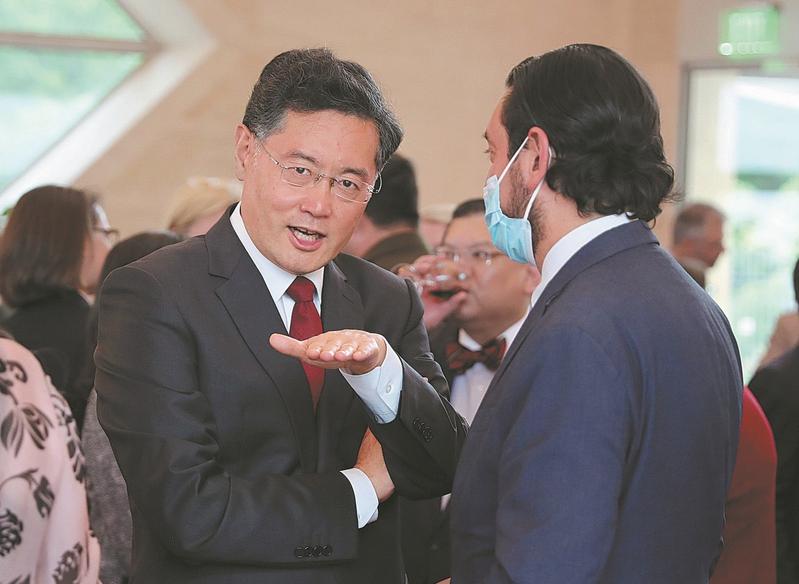 Chinese Ambassador to the United States Qin Gang (left) talks with Daniel Legarda, vice-minister of foreign trade of Ecuador, at a reception at the Chinese embassy in Washington on the evening of July 26, 2022 marking the 95th anniversary of the founding of China's People's Liberation Army. (ZHAO HUANXIN / CHINA DAILY)

China's military will take "forceful measures" to defend national sovereignty and territorial integrity if anyone wants to breach China's bottom line on the Taiwan question, Beijing's top envoy in Washington said on Tuesday.

Ambassador Qin Gang made the remarks at a reception on Tuesday marking the 95th anniversary of the founding of Chinese People's Liberation Army, which was established on Aug 1, 1927.

Chinese Ambassador to the United States

If anyone tries to separate Taiwan from China, if anyone wants to challenge China's bottom line, the Chinese military will take forceful measures to firmly safeguard national sovereignty and territorial integrity

His comments came amid reports that Speaker of the US House of Representatives Nancy Pelosi may visit Taiwan.

Qin emphasized that the Taiwan question remains the most important and sensitive core issue in China-US relations.

He noted that the Chinese government values peace and stability across the Taiwan Straits, and has been making the "utmost efforts" for peaceful reunification, but "Taiwan independence" separatist forces and their activities pose the biggest threat to cross-Straits peace and stability.

"If anyone tries to separate Taiwan from China, if anyone wants to challenge China's bottom line, the Chinese military will take forceful measures to firmly safeguard national sovereignty and territorial integrity," he said at the reception.

READ MORE: US urged to cease any form of official exchanges with Taiwan

The gathering was attended by about 300 guests, including representatives of the US military, the State Department, embassies in the US, military attaches and overseas Chinese.

As of Tuesday, the White House and US State Department both said that the trip has yet to be confirmed.

"What we have said on this still stands. It's my understanding that the speaker's office has not announced any travel, and our approach to Taiwan has not changed in any way," US State Department spokesman Ned Price said at a briefing on Tuesday when asked to comment on Pelosi's potential trip.

US President Joe Biden said on July 20 that the US military believes it is "not a good idea" for Pelosi to visit the island at the moment.

At the reception, Qin said that maintaining the stability of military-to-military relations is essential to China-US relations.

Since April, the two militaries have had three high-level exchanges, laying a good foundation for further interactions, according to Qin.

Since the founding of the People's Republic of China in 1949, China has never initiated any war or conflict, and has never occupied a single inch of another country's territory, Qin said

Those interactions included a meeting in June between China's State Councilor and Defense Minister Wei Fenghe with US Defense Secretary Lloyd Austin in Singapore, where Wei warned about the US' "illusions" on the Taiwan question.

ALSO READ: US urged to stop selling weapons to Taiwan

Qin said, "It's hoped that the two sides will make joint efforts to strengthen communication, build military mutual trust, manage risks and crises, and advance cooperation in areas of shared interests, such as counterterrorism, peacekeeping, military medicine and military environmental protection, so as to contribute to the stable development of our bilateral, including military-to-military, relations."

He also said China is firmly committed to the path of peaceful development and has a defense policy that is defensive in nature, and that the Chinese military has always been a champion and contributor to world peace.

Since the founding of the People's Republic of China in 1949, China has never initiated any war or conflict, and has never occupied a single inch of another country's territory, Qin said.

China has sent almost 50,000 troops on 25 peacekeeping operations, and sent over 120 vessels in escort missions for more than 7,000 Chinese and foreign ships, making the country the largest troop contributor among permanent members of the United Nations Security Council.

China is also the second-largest financial contributor of UN peacekeeping budget, according to the ambassador.

Qin noted that this year marks the 50th anniversary of US president Richard Nixon's visit to China, and 50 years later, the China-US relationship is at a new crossroads.

He said that some people asserted that China and the US cannot avoid the "Thucydides Trap" — a clash when a major power feels threatened by the emergence of a new power — and the "tragedy of major-power politics", while others said that the two countries will enter into a new Cold War.

"With the lessons of major-country conflict and confrontation still fresh in our memory, we should say a categorical 'no' to these assertions, and jointly explore a way of peaceful coexistence of two major countries with different social systems, development paths, history and cultures on this planet," Qin said.