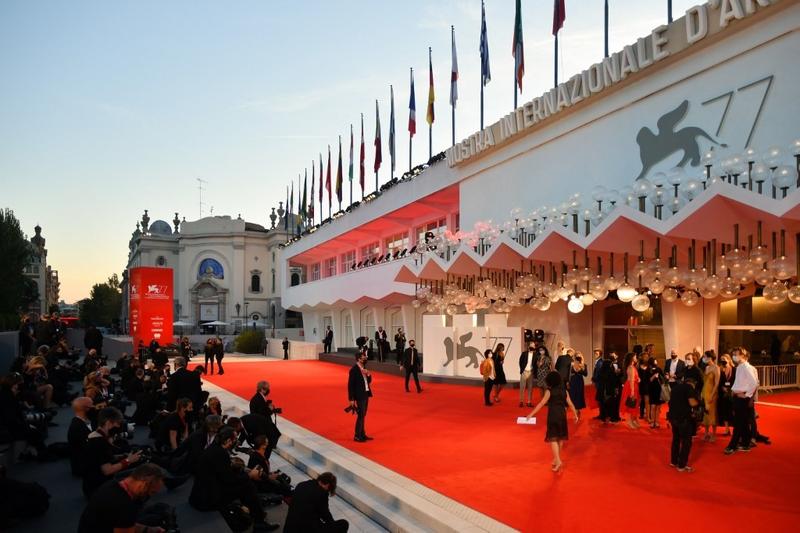 A general view shows press photographers waiting for guests to arrive at the festival's palace for the screening of the film "Nomadland" presented in competition on the tenth day of the 77th Venice Film Festival, on September 11, 2020 at Venice Lido. (ALBERTO PIZZOLI / AFP)

ROME – The complete line-up of the Venice International Film Festival 2022 was unveiled at a press conference on Tuesday, with 73 new feature films in the Official Selection. Of these, 23 will compete for the Golden Lion.

The 79th edition of the international event, which runs from Aug 31 to Sept 10 on the Venice Lido – will open with Netflix's "White Noise" by US filmmaker Noah Baumbach. The movie is based on Don DeLillo's 1985 novel of the same name

The 79th edition of the international event, which runs from Aug 31 to Sept 10 on the Venice Lido – will open with Netflix's "White Noise" by US filmmaker Noah Baumbach. The movie is based on Don DeLillo's 1985 novel of the same name.

The Festival's artistic director Alberto Barbera said on Monday evening it would be "a great honor" to open with this film.

"Baumbach has made an original, ambitious and compelling piece of art, which plays with measure on multiple registers: dramatic, ironic, satirical," Barbera said.

"The result is a film that analyses our obsessions, doubts, and fears as they were in the 1980s, yet with very clear references to contemporary reality."

For Baumbach, it will mark a return to Venice three years after the premiere of his film "Marriage Story," which earned six nominations at the 2020 Academy Awards, and an Oscar for Laura Dern as best supporting actress.

The festival will close on Sept. 10 with the out-of-competition Sky Original film "The Hanging Sun" by Francesco Carrozzini, a thriller adapted from a noir novel by Jo Nesbo and set in a Norwegian summer "where the sun never sets."

The 23 films competing for Venice's highest prize, the Golden Lion, include "The Lord of the Ants" by Italian director Gianni Amelio. Also in the running is “The Immensity" by Emanuele Crialese, starring Penelope Cruz.

The festival's line-up also includes US filmmaker Darren Aronofsky's drama "The Whale"; "Beyond the Wall" by Iranian director Vahid Jalilvand; "The Son" by French director Florian Zeller; "Bones and All" by Italian director Luca Guadagnino; the comedy "Bardo" by Mexican filmmaker Alejandro Inarritu, and "The Banshees of Inisherin" by Irish director Martin McDonagh.

Some 19 movies and documentaries, two television series, and four short films will play out of competition. A further 30 works (including short films) will compete in the Horizons category, Venice's international section devoted to new cinema trends.

Barbera said that the public will enjoy a program that is "more varied than usual," with established filmmakers featured alongside emerging directors, and talented newcomers striving for international recognition.

"What prevails is the feeling that cinema still wants to try to explore ways of thinking, big themes and big questions, the deep relationships tying people to one another ...and (it still has) the ability to push one's gaze beyond the horizon of the present," Barbera added.