After sub row, Macron says wants to focus on future with Australia 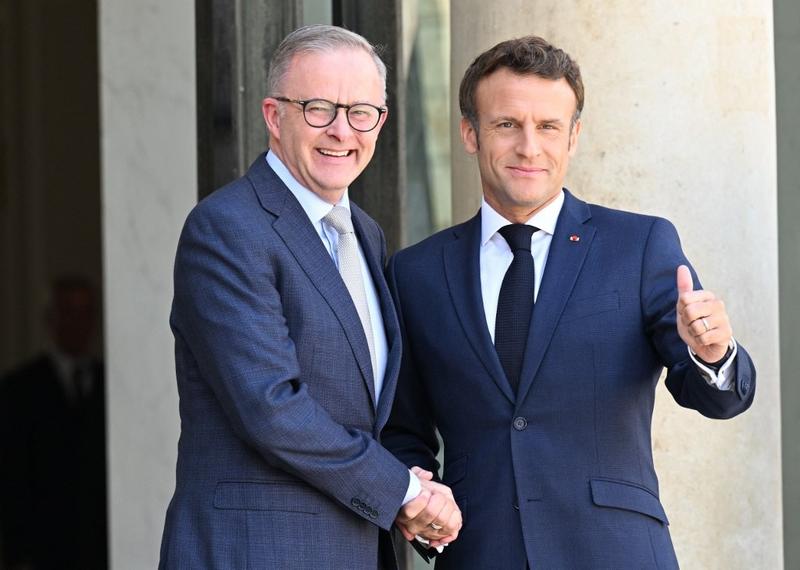 PARIS - French President Emmanuel Macron told new Australian Prime Minister Anthony Albanese he wanted to focus on the future as they try to rebuild relations badly strained by his predecessor's decision to ditch a submarine contract with Paris.

Relations between the two Western allies reached a low last October when Australia cancelled a multi-billion dollar French submarine program and opted for submarines to be built with US and British technology instead.

In his statement at the French presidential palace,  Australian PM Anthony Albanese thanked French President Emmanuel Macron for the warm welcome and appeared to allude to the submarine dispute: "Trust, respect, and honesty matter," he said

Receiving Albanese at the Elysee Palace in Paris, the pair were asked if Australia should apologize.

"He's not responsible for what happened," Macron replied. "We'll speak about the future, not the past."

The decision to scrap the lucrative contract had incensed Paris.

Macron reacted with fury, recalling the French ambassador to Australia, accusing the then-Australian prime minister, conservative Scott Morrison, of lying, while the French foreign minister said Canberra had "stabbed its ally in the back".

But Morrison's party lost elections in May and his Labour successor has pledged to rebuild ties with France.

In his statement at the French presidential palace, Albanese thanked Macron for the warm welcome and appeared to allude to the dispute: "Trust, respect, and honesty matter," he said.

ALSO READ: France recalls envoys from US and Australia over sub deal

Paris, which has 1 million citizens living in territories spanning the Indian and Pacific Ocean and 8,000 troops stationed there.

On Friday, Macron said the two would discuss defense and geo-strategic issues but also "new projects" in terms of renewable energy, critical metals, space, and the poles, with the two countries both having territories in the Antarctic.