HKSAR makes big strides in bid to be global technology hub as startups rise to the occasion. Zhang Tianyuan reports from Hong Kong. 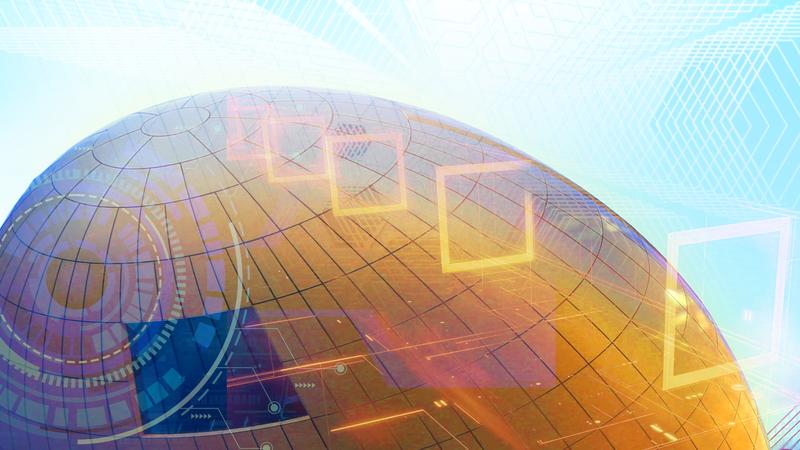 The story of GeneHarbor (Hong Kong) Biotechnologies, which transitioned from startup to unicorn in the space of two decades, is inextricably linked to its biotechnology breakthrough in reducing raw materials costs.

Established in 2004, the dietary supplements producer has been focusing on developing nicotinamide mononucleotide (NMN) — the compound that reputedly delays the aging process — from 2013. The following year, a research team led by the company’s founder and CEO Wang Jun applied the enzyme-based process in manufacturing NMN, which is more efficient and cost-effective than the traditional synthesis-based method. The process shaved raw material costs a thousandfold to $2,000 per kilogram.

Since 2016, GeneHarbor’s sales of NMN products have increased over two-hundredfold.

GeneHarbor’s inspirational story is a microcosm of Hong Kong’s burgeoning innovation and technology sector. The city, long criticized for its overreliance on the financial and property sectors, took just four years from 2017 to conceive 18 unicorns, according to the Hong Kong Unicorns List Unicorns HK 2021 report released by a local innovation charity foundation.

Hong Kong has the potential to punch above its weight to be an international technology powerhouse, backed by the nation’s mega development road map for the Guangdong-Hong Kong-Macao Greater Bay Area and the SAR’s Northern Metropolis Development Strategy, although it missed out on opportunities to develop the technology and innovation sector at the start of the millennium.

Since Hong Kong’s return to the motherland in 1997, the SAR government has mapped out an ambitious blueprint to boost the technology and innovation sector with massive capital, along with the support of scientists and financial moguls. The 1998 Policy Address by then-chief executive Tung Chee-hwa set aside HK$5 billion for an Innovation and Technology Fund to finance innovative projects.

Tung designated the establishment of Cyberport in 1999, two years after unveiling the Hong Kong Science Park project, which became Hong Kong’s landmark technology facilities to grow innovation and high-technology startups and transform the city into a regional center for inno-tech development.

However, Hong Kong’s economy went through a turbulent period between 1997 and 2005 as the Asian financial crisis gripped the city from 1997 to 1999, followed by the global dot-com bubble burst in 2000 and the SARS outbreak in 2003.

“Global headwinds slammed the brakes on Hong Kong’s technology sector which went into a decade-long hibernation before its anabiosis,” said Duncan Chiu, a lawmaker representing the technology and innovation sector in the city’s Legislative Council. “The setting up of the Innovation and Technology Bureau in late 2015 marked a remarkable milestone in the SAR government’s efforts to reinvigorate the sector’s development as it’s a zero-to-one department specifically tailored for technology and innovation,” he noted. The organization’s name is changed to the Innovation, Technology and Industry Bureau, with effective from July 1. 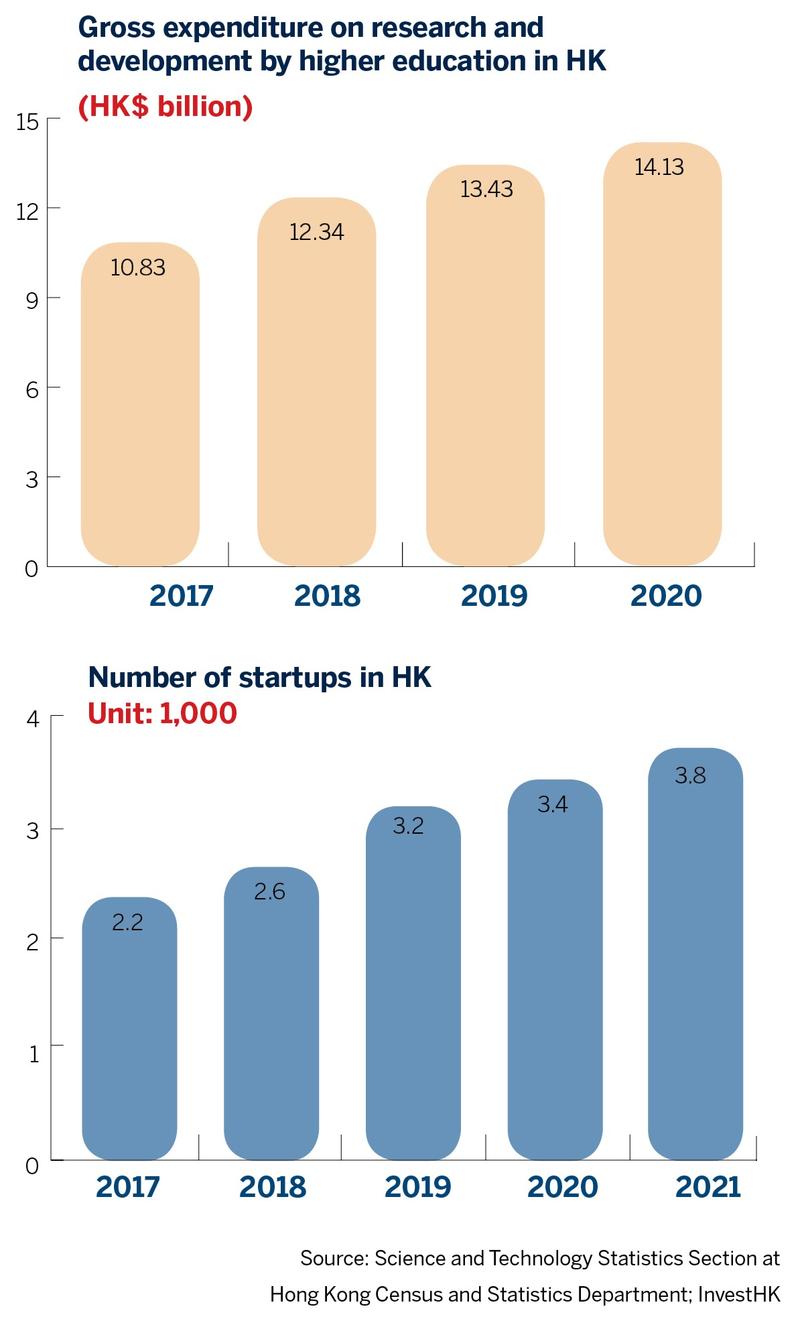 The SAR government has since allocated more investments to create a favorable environment for high-tech enterprises — exceeding HK$150 billion since 2017 — to promote new initiatives, including the HK$2 billion Innovation and Technology Venture Fund. The ratio of research and development to the city’s GDP climbed from 0.8 percent in 2017 to 0.99 percent in 2020.

The number of startups in Hong Kong more than doubled from 1,558 in 2015 to 3,755 in 2021, according to a survey conducted by InvestHK. Chiu said he has seen growing confidence in the city’s innovation sector among local residents and global talent in the past few years.

Sunny Chai Ngai-chiu, chairman of Hong Kong Science and Technology Parks Corp, said the number of startups and tech ventures, which come from 24 countries and regions, at HKSTP has soared by 40 percent to 1,100 in the past four years. “There’s growing appetite to invest in local inno-tech startups. In the past four years, more than 220 investment deals have been sealed at HKSTP, raising HK$68 billion,” he added.

The amount of venture capital investment surged from HK$1.24 billion to about HK$41.7 billion between 2014 and 2021, according to the city’s 2022-23 Budget. On-demand logistics and delivery firm Lalamove — one of Hong Kong’s super unicorns bred at HKSTP — has secured more than $2.5 billion in venture capital since its inception in 2013. SenseTime — another tech giant on the Hong Kong Unicorns List Unicorns HK 2021, specializing in facial and image-recognition technology — went public on the Hong Kong Stock Exchange in December, raising HK$20 billion. Its stock is currently traded at more than 50 percent above its offering price of HK$3.85.

Phillips from InvestHK said tech companies can now access the Hong Kong Stock Exchange, which is a “much more liquid capital pool than any other center in Asia”. Besides, Hong Kong, backed by the vast Chinese mainland market, is in a good place for marketing, he said.

The central government has pledged support for Hong Kong’s efforts to be an international technology hub. The 14th Five-Year Plan (2021-25) — a crucial initiative for China’s economic and social development — identified the Shenzhen-Hong Kong Loop as a major platform of cooperation in the Greater Bay Area for the first time. The loop is a government-run fertile ground for innovation and technology firms.

The Greater Bay Area development plan encourages young people from Hong Kong to innovate and set up businesses on the mainland, and supports enterprises in setting up research and development institutes for innovation incubation across the border. The SAR’s Northern Metropolis program involves creating an innovation and technology hub in the northern New Territories.

The SAR government also plans to establish the San Tin Technopole, combining it with the land development of the Hong Kong-Shenzhen Innovation and Technology Park in the Lok Ma Chau Loop. “With the necessary space and scale in place, Hong Kong will be even better positioned to develop the city’s inno-tech industry and accelerate the progress of our economy,” said Chai.

The availability of talent is also a significant factor in measuring a dynamic international technology hub. “Nowadays, having the right talent is key to a startup’s success,” Phillips said.

Li Zexiang, a professor at the department of electronic and computer engineering of the Hong Kong University of Science and Technology, said: “A good entrepreneur is capable of hitting the bull’s-eye in the market by integrating distinct resources, including production supplies and capital, and solving challenging issues in various development stages.”

Li is also an experienced startup incubator working partially at some prominent innovation enterprises, including the world’s top drone maker DJI and Googol Technology — one of China’s top high-tech companies producing motion controllers. DJI and Googol have one thing in common — both were born at HKUST. In Li’s opinion, universities are cradles for cultivating entrepreneurial and innovative talent.

GeneHarbor’s Wang, who’s also an adjunct professor at CUHK, said Hong Kong is the only city in the world with five universities of high global rankings, indicating its ample technology professional pool. However, advanced manufacturing in Hong Kong rarely generates job vacancies, making it difficult to retain relevant talent and may even lead to a brain drain.

He said nurturing technology talent must be supported by industrial manufacturing, where they can practice and identify cutting-edge projects. “You can’t make bricks without straw. It’s significant for Hong Kong to embark on reindustrialization.”

The SAR government announced a reindustrialization program in 2016 aimed at revitalizing traditional industries by using new technologies and developing emerging sectors. Under the policy, GeneHarbor plans to move part of its production lines from the mainland to Tai Po InnoPark — one of HKSTP’s industrial estates focusing on inno-tech-led manufacturing.

To help the inno-tech sector thrive in the long term when the business landscape is constantly shifting beneath them, Li from HKUST said the SAR government should have the courage to take certain risks and make decisions more precisely and quickly to deal with the rapid iteration (of technology applications) in formulating policies.

“Time and tide wait for no man. It’s impossible to ensure that every step is perfect before implementing it.”