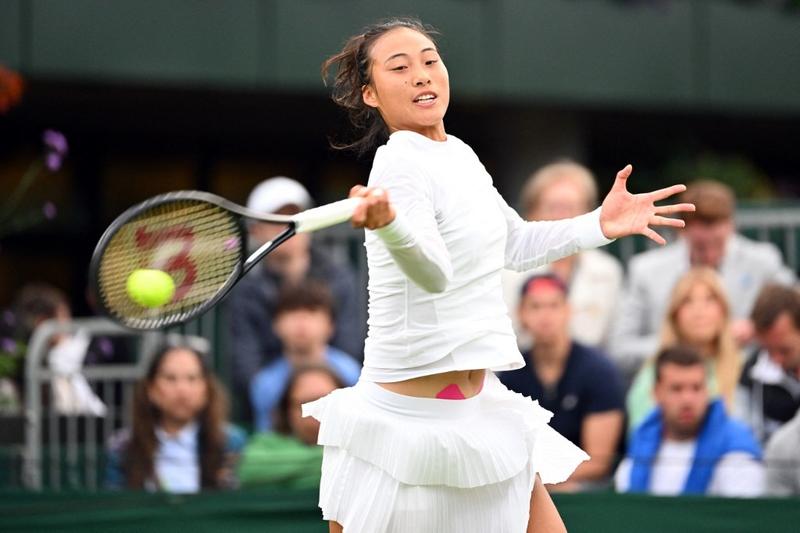 China's Zheng Qinwen returns the ball to US player Sloane Stephens during their women's singles tennis match on the second day of the 2022 Wimbledon Championships at The All England Tennis Club in Wimbledon, southwest London, on June 28, 2022. (SEBASTIEN BOZON / AFP)

No experience, no problem. China's teenage star Zheng Qinwen dazzled in her Wimbledon debut with an upset of former major winner Sloane Stephens－capping a hat-trick of first-round victories for Chinese aces on Tuesday.

Arriving at Wimbledon without any warm-up wins on grass, Zheng entered the match against former world No 3 and 2017 US Open winner Stephens as the apparent underdog. However, the 19-year-old prodigy needed just an hour and 43 minutes to prove none of the stats or records matter once she finds her rhythm.

I don't really care who my opponent is. Whoever stands on the other side of the net, I will always do my best. Same thing for the next round, I will just focus on my game and try to play my style to the best of my ability.

"I don't really care who my opponent is. Whoever stands on the other side of the net, I will always do my best," Zheng said of taking on a former major winner during a post-match interview with Xu Lijia, China's former Olympic champion sailor and a freelance reporter at Wimbledon.

"Same thing for the next round, I will just focus on my game and try to play my style to the best of my ability," added Zheng, whose next opponent could be 2017 Wimbledon champion Garbine Muguruza of Spain.

As one of the rising stars on the WTA Tour, Zheng's impressive form on clay this year was interrupted by two straight opening-round losses at grass tournaments in Berlin and Eastbourne, raising concerns that she was struggling to adapt to the faster, yet lower-bouncing surface she rarely practices on.

Some extra training sessions on grass and a few tips from her coach, former Spanish pro Pere Riba, apparently had the desired effect for Zheng.

"I realized playing on grass, I'm not as comfortable as I am on clay," said Zheng, who followed up a fourth-round run at Roland Garros by winning her first WTA 125 title in Valencia, Spain, to climb to a career-high ranking of No 52 after the clay swing.

"The two warm-up losses had exposed my weakness on grass. We did some specific training and a lot of physical conditioning to prepare for Wimbledon. It worked out just fine."

Boasting a ferocious attacking style, Zheng's powerful forehand and kick serve simply proved too much to handle for Stephens, who squandered a 5-3 lead in the second set as Zheng won four games in a row to clinch victory. With the light fading fast, Zheng's second-set surge avoided a potential overnight wait to resume play.

It was Zheng's second straight win over Stephens following a three-set, first-round victory over the 29-year-old American at the clay-court Charleston Open in South Carolina in April. 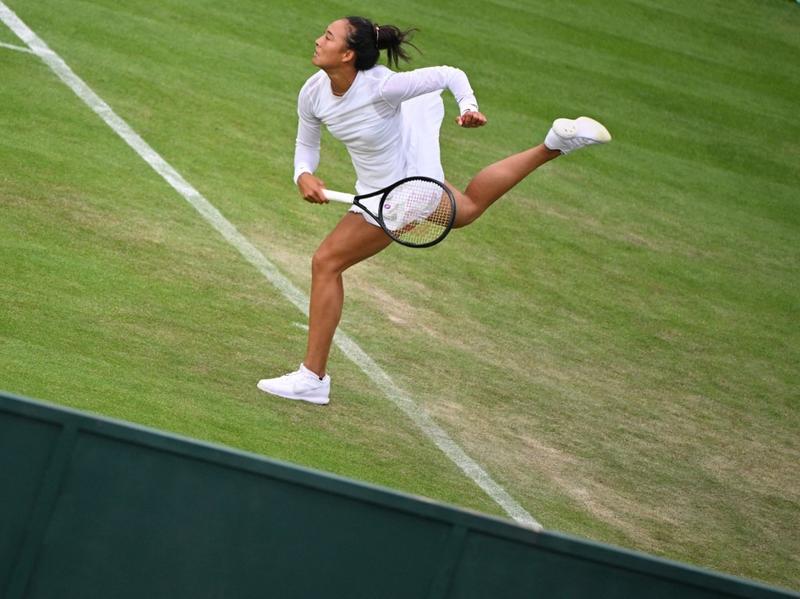 China's Zheng Qinwen serves to US player Sloane Stephens during their women's singles tennis match on the second day of the 2022 Wimbledon Championships at The All England Tennis Club in Wimbledon, southwest London, on June 28, 2022. (SEBASTIEN BOZON / AFP)

Zheng has now passed the first round at her first three majors (she reached the second round at the Australian Open), giving Chinese fans hope that a new singles superstar could be in the making. The country has been starved of Grand Slam contenders since the retirement of the so-called "Golden Flowers" led by two-time major winner Li Na and doubles specialist Zheng Jie.

Joining Zheng in the second round were veterans Wang Qiang and Zhang Shuai, who beat Belinda Bencic of Switzerland and Japan's Misaki Doi respectively on Tuesday.

In a match that was suspended on Monday evening due to darkness, Wang came back stronger on Tuesday to eliminate the 14th-seeded Bencic 6-2, 5-7, 6-2. It was Wang's first win over a seed at Wimbledon.

"I feel like I am gradually getting back on track after learning new things from coach and trying a more aggressive style," Wang said of her work with Australian legend Pat Cash, the men's singles champion at Wimbledon in 1987.

"It's not easy though to integrate all the new things into your game which you've been quite used to," added Wang, a former world No 12 who is now ranked 140th.

"Yet I am still committed to making changes and coming out of my comfort zone. There is no making without breaking."

As the only seeded Chinese in the draw, 41st-ranked Zhang cruised into the second round in her eighth Wimbledon appearance, defeating Doi 6-4, 6-0.

"I feel quite confident after some impressive performances at warm-up events leading up to Wimbledon," said Zhang, who reached both singles and doubles finals at Birmingham and quarterfinals in singles at Nottingham, two WTA 250 grass events in England.

"But anyone who makes it into the main draw at a Grand Slam is a tough opponent. So, I won't underestimate any opponent, nor look down on myself going forward in the tournament."