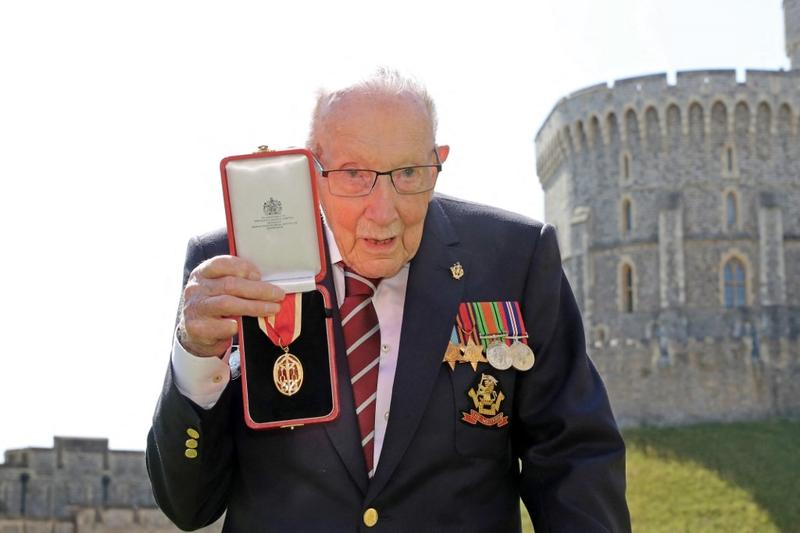 100-year-old WWII veteran Captain Tom Moore poses with his medal after being made a Knight Bachelor during an investiture at Windsor Castle in Windsor, west of London on July 17, 2020. (CHRIS JACKSON / POOL / AFP)

LONDON - Britain's charity watchdog said on Thursday it had launched an investigation into the foundation set up in honor of record-breaking fundraiser Captain Tom Moore who raised millions during the coronavirus pandemic.

World War Two veteran Moore became a national hero and made headlines globally after raising 38.9 million pounds ($53 million) for the National Health Service by walking around his garden with the help of a frame in April 2020.

The Charity Commission said it had opened an inquiry after identifying concerns about the management of the Captain Tom Moore Foundation, which was set up in the wake of his fundraising success, including its independence from his family.

It said it was concerned a company controlled by his daughter, Hannah Ingram-Moore, might have generated "significant profit" by using the "Captain Tom" trademark without objection from the charity.

The money raised by Moore was donated to a separate charity before the Foundation was formed and is not part of the investigation.

"We do not take any decision to open an inquiry lightly, but in this case our concerns have mounted," said Helen Stephenson, the Commission's chief executive.

"We consider it in the public interest to examine them through a formal investigation, which gives us access to the full range of our protective and enforcement powers."

Stephen Jones, chairman of the board of trustees of the Captain Tom Foundation, said they would work closely with the commission "in its inquiry relating to intellectual property management".

Last July, the regulator refused permission for the Foundation to employ Ingram-Moore as chief executive on a salary of 100,000 pounds a year, saying it was not justifiable.

However, the following month it allowed her to be appointed for a wage of 85,000 pounds for a maximum of nine months while they looked for a new CEO, who has since been recruited.